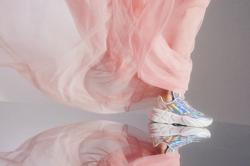 In the first trailer for Cinderella, the latest retelling of the classic fairytale, Camila Cabello's princess isn't searching for Prince Charming.

No, the young woman, who glamourised the glass slipper, dreams of building her own fashion empire.

The upcoming movie gives a modern spin on the familiar story about an orphan forced to live with her evil stepmother and wicked stepsisters.

In this version, the ambitious protagonist, who goes by Ella, is no damsel in distress.

She desires to be a seamstress and one day launch her own dress line – naysayers be damned.

"Here's a laugh, this girl fancies herself a businessman," one particularly rude townsperson says to raucous laugher, even though Cinderella can clearly hear him.

When her cruel stepmom (Idina Menzel) bans her from going to the ball, thus ruining her chances of showing off her custom gowns, Cinderella is greeted by her Fab G, portrayed by Pose star Billy Porter.

"Do you want to go to that ball and meet a bunch of rich people who will change your life," he asks.

"Yes," Cinderella says plainly. "I was just crying and singing about it two minutes ago."

Cinderella naturally makes a splash, capturing the attention of potential customers and at least one charming bachelor.

"I pick you to be my princess," the prince (Nicholas Galitzine) tells her.

"But what about my work?" she asks.

Cinderella was written and directed by Kay Cannon, a former 30 Rock writer who is best known for creating the Pitch Perfect franchise.

Sony was initially expected to release Cinderella in theaters, but the studio sold the film to Amazon during the pandemic. It will debut on the streaming service on Sept. 5. – Reuters

Watch the trailer below:

Binge watch your favourite shows in HD. Apply Shopee Discount Code to save on your electronics purchases

F1 champion Michael Schumacher gets a new documentary about his life