One may be forgiven for thinking Chow Yun Fat has switched careers and become a running coach and masseur.

The Hong Kong actor has not been seen on the big screen in more than two years. His last role was in the crime thriller Project Gutenberg (2018), which saw him nominated for Best Actor together with his co-star Aaron Kwok at the Hong Kong Film Awards in 2019.

However, the avid hiker is seen frequently in the social-media photos of fans and other celebrities such as actress Carina Lau.

It looks like singer Alan Tam is the latest member to join Chow's hiking contingent.

Tam, a member of Cantopop band The Wynners, wrote: "I ran into some cool guys and old friends in the morning. They have joined Mark Gor's outdoor running team and have just completed their exercises."

Tam, a fitness buff himself, was referring to Chow's famous character in gangster flick A Better Tomorrow (1986).

"I heard that Fat Gor (Big Brother Fat) is team leader, coach and masseur at the same time. They have asked me to join in the run soon and try his massage at the same time," he joked.

It turned out that "soon" was the next morning, as Tam wrote on Thursday: "I didn't know that 'soon' with Mark Gor is the next morning. He can not only run, coach and massage, but can take good photos too." – The Straits Times/Asia News Network 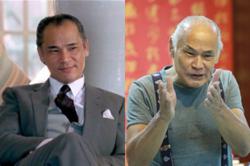