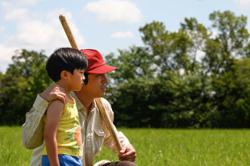 The role would mark a return to acting for Felicity Huffman, who recently completed a short prison sentence for her involvement in the national college admissions scandal. Photo: Handout

Felicity Huffman and The Peanut Butter Falcon star Zack Gottsagen are attached to lead a comedy at ABC that has landed a pilot production commitment.

The untitled single-camera comedy stars Huffman as the unlikely owner of a minor league baseball team.

After suddenly losing her husband and inheriting his beloved team, she is forced to navigate her new normal with the help of her dysfunctional family, including her oldest son, a baseball devotee with Down's Syndrome (Gottsagen), her work family and the Sacramento community at large.

The project is inspired by Susan Savage, the real-life owner of the Triple A World Champion River Cats.

The role would mark a return to ABC and acting in general for Huffman, who recently completed a short prison sentence for her involvement in the national college admissions scandal.

She previously starred on the network's hit dramedy Desperate Housewives as well as the critically-acclaimed ABC shows American Crime and Sports Night.

She won an Emmy for her time on Desperate Housewives and won a Golden Globe for the film Transamerica. – Reuters