‘I’ve had it with this road trip through Lovecraft Country. Think I’ll head home and work on a new thing I’ve been kicking about in my head, the role playing game.’ Photos: Handout

To say that HBO’s new horror series Lovecraft Country drags the viewer screaming in unexpected directions would be something of an understatement.

Even as someone who has read Matt Ruff’s 2016 dark fantasy novel on which the show is based, I was startled by some of the twists and turns in the first half of the show (made available in advance to reviewers) to the point of nearly spilling my popcorn... among other things.

The book is a mosaic novel with rotating points of view, tonal shifts and varying themes, taking some inspiration from the works of acclaimed horror author H.P. Lovecraft.

It weaves all this into a story of ambition, aspirations and identity set against a backdrop of racism and strife (the main protagonists are African-Americans in 1950s America, when the Jim Crow racial segregation laws were enforced in various states and counties), and does this with unsettling effectiveness.

The series – produced by J.J. Abrams (honestly, not a name I’m happy to see after The Rise Of Skywalker) and Jordan Peele (Get Out, Us, the current Twilight Zone revival) and developed by Misha Green (Underground) – is like the book in this respect.

Some episodes focus on hustler Letitia Dandridge (Jurnee Smollett, Birds Of Prey) and her attempts to put down roots.

Some focus on Atticus Freeman (Jonathan Majors, Da 5 Bloods), a former soldier who encounters a very powerful white family of... shall we say, practitioners of arcane arts. ‘That fellow with the queer narrow head and bulgy, stary eyes is refusing to serve us. That’s it, I’m never driving through Innsmouth again.’

Their paths intersect with that of Christina Braithwhite (Abbey Lee), the only daughter of powerful patriarch Samuel Braithwhite (Tony Goldwyn). And I figure that’s as far as I can go since reviewers have been “encouraged” to keep crucial plot points under wraps.

Still, it can safely be said that the people behind Lovecraft Country have pulled out all the stops to recreate a convincing facsimile of life in those days – when merely stopping at the wrong roadside diner could lead to hungry people suddenly running for their lives from murderous locals.

The episodes are, like the chapters in the source novel, tonally different too. There are moments right out of Indiana Jones films, and some that call to mind classic haunted house movies; we’ve also got cabin-in-the-woods survival horror, secret rituals, body horror – and we haven’t even reached my favourite parts of the book yet.

Green has also made considerable effort to keep the show fresh for people who already read Ruff’s work.

In particular, the search for a lost volume of ancient lore is shot way differently than it played out in print; and some character arcs are expanded from the novel.

That’s not always good, since I felt one of these extended arcs in particular tries too hard to cram in all colours of the rainbow when (given the Lovecraft connection) I really wanted to see something more like The Colour Out Of Space. 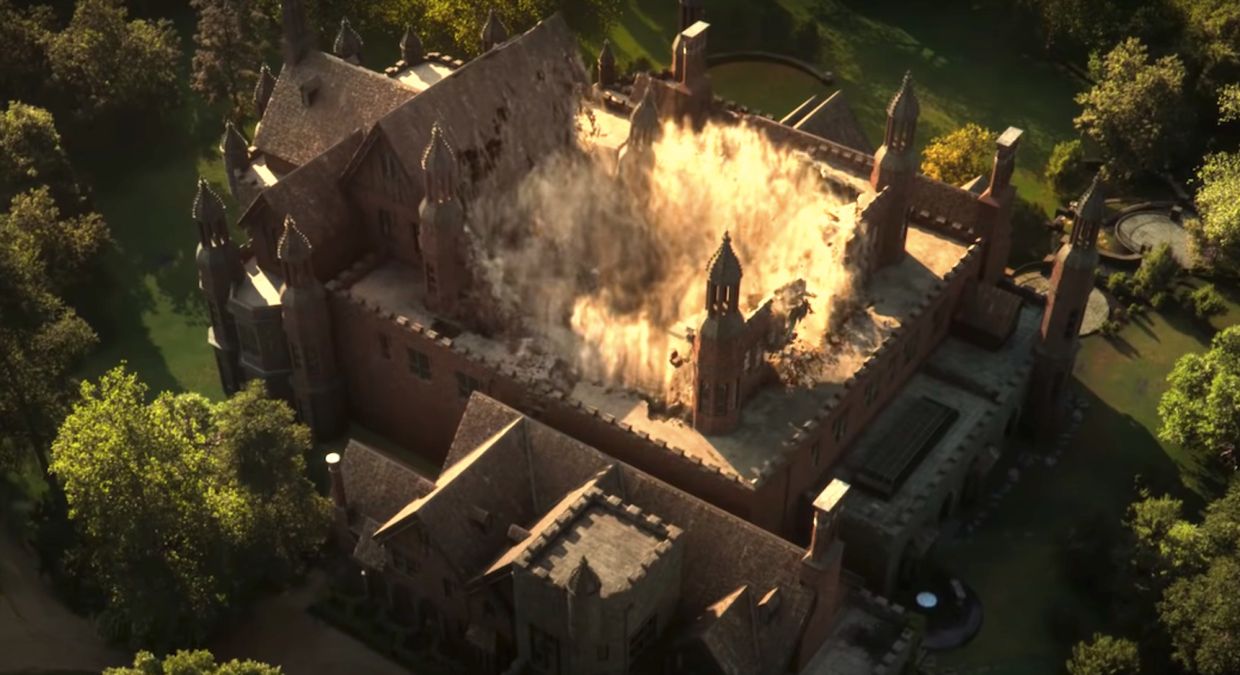 Ghoth the Burrower accidentally took a wrong turn under the old mansion.

I was unsure about one change from the book – Christina Braithwhite is actually a dude, Caleb, in the novel.

But now I get that it’s more effective at selling the whole denial-of-one’s-birthright angle for a daughter rather than a son when we’re dealing with such well-worn tropes as supercilious patriarchs.

The ensemble cast does a fantastic job of breathing on-screen life into Ruff’s characters – people of dynamic spirit, strong ambition and unshakeable will, who maintain a tight grip on their identity even though temptations (and opportunities) arise to change these at will.

Best of all, many of them are well read and up-to-date on the great science fiction, fantasy and horror literature of the day. It’s telling that in later decades, such folks would be thought of as nerds; while back then, it is suggested to have been... ordinary.

It is not always made clear what part the nominal “bad” guys (and gals) have to play, but their overall effect is to heighten the peril and anxiety that are part of our main characters’ lives.

Racism, be it casual or menacing, is not glossed over here.

Can a monster that tears and rends assorted body parts in the blink of an eye pale in menace next to an unreasoning, bigoted human on the brink of committing violence upon someone of a different shade of skin colour?

Sure, because some horrors can be put away on bookshelves while others have to be faced every day.

Lovecraft Country deserves some kudos, then, for doing such a fine balancing act in serving up both varieties in equally terrifying portions.

New episodes of Lovecraft Country airs every Monday at 9am on HBO Go. Repeats are at 10pm on HBO (Astro Ch 411).