‘We have to get out of here. That big guy Steve from Brooklyn says he wants his star-spangled costume back.’

There are comic-book conceits that often make us stop and think about their real-world viability.

For example, would an organisation of “evildoers” (and don’t they just hold to different ideologies than their self-styled “superhero” opposites?) actually regard themselves as evil to the point of reflecting that trait in their names?

Like, say, Marvel’s Brotherhood of Evil Mutants; or DC’s League of Super-Villains and Injustice Society of America?

So while a self-appointed superhero would not hesitate to call an enemy a super-villain, how readily would such “baddies” embrace the label?

DC’s Stargirl – its latest TV series adaptation – features the Injustice Society of America (ISA) as its principle antagonists, and they seem perfectly happy to run with the name.

This leads to some interesting examinations of the morality, motivations and ideology of the bad guys, ruthless as they are: were they named thusly because they perpetrate injustice on the public? Or do they seek to address and reform fundamentally unjust situations in the social fabric?

Before viewers get to delve into such questions, however, the show treats us to a magnificent victory on the ISA’s part: the defeat and near-total destruction of their good-guy nemeses, the Justice Society of America (JSA).

Known to longtime comic readers and viewers of Smallville, Legends Of Tomorrow and the recent Crisis On Infinite Earths crossover, the JSA is a Golden Age (of comics) forerunner of the Justice League. 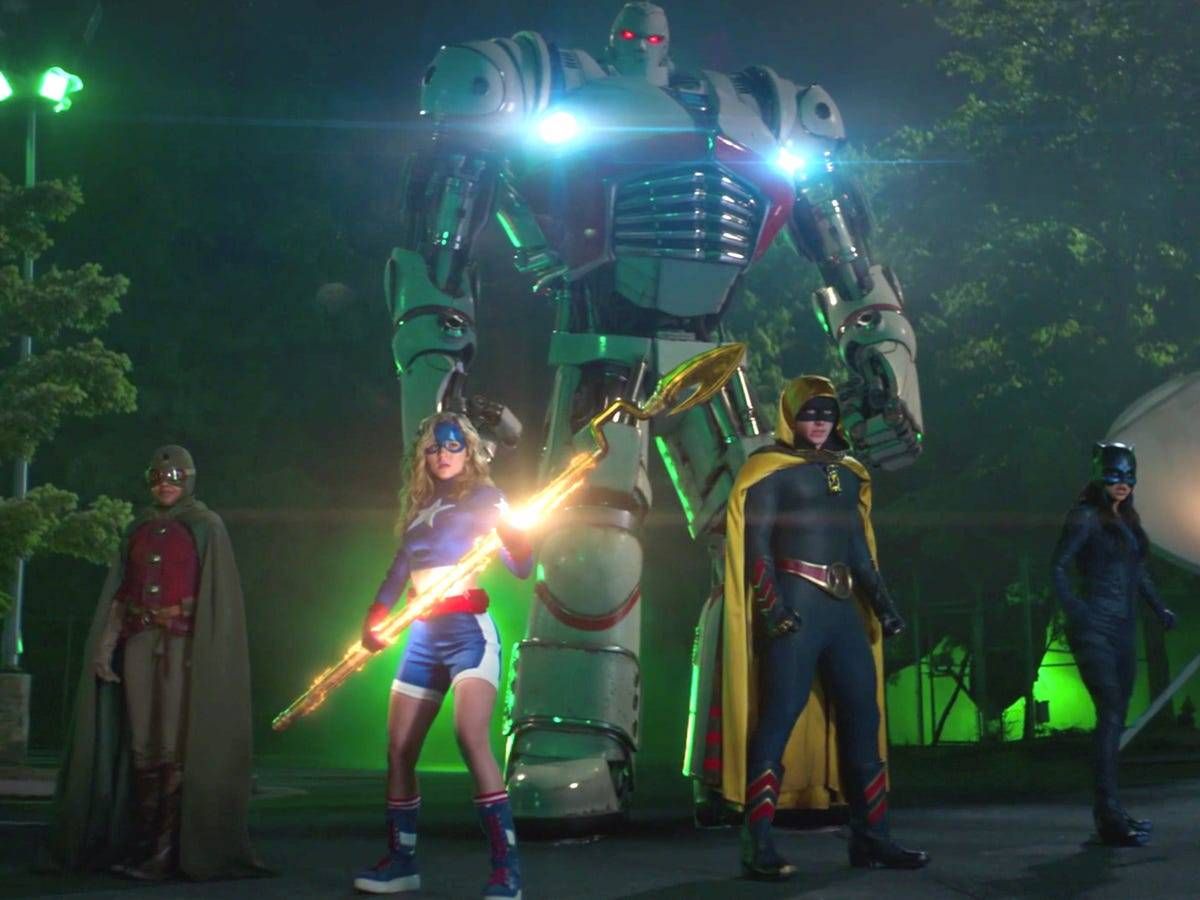 In the spectacular opening minutes of Stargirl, we watch nearly all of them perish at the ISA’s hands. A gravely injured Starman (Community’s Joel McHale) entrusts his sentient, nigh-indestructible Cosmic Staff to his sidekick Stripesy (Luke Wilson) to keep, not to wield, and dies.

Years later, we rejoin Stripesy a.k.a. Pat Dugan after his marriage to the widowed Barbara Whitmore (Amy Smart). Now stepfather to her teenage daughter Courtney (Brec Bassinger, School Of Rock), Pat packs the family – including his own son Mike (Trae Romano) – off for a fresh start in the small town of Blue Valley. Which, coincidentally, happens to have a large number of “embedded” ISA members who now have families of their own.

When Courtney discovers the Cosmic Staff and it bonds with her, she decides (without confirmation) that her long-estranged and now-dead father was the original Starman – so she must continue his legacy, as Stargirl.

If this sounds like the series is unafraid to hold its comic-book roots high and run with them exuberantly through the streets... well, yes, it is.

And that makes Stargirl one of the most unabashed adaptations of a comic ever (in this case, the 1999 series Stars And S.T.R.I.P.E. written by Geoff Johns, who also created the TV show), clinging to those roots as lovingly as, say, Sam Raimi’s first two Spider-Man movies.

While it does not have those films’ occasionally awkward stabs at romance and humour, it has a big speed bump of its own: teenagers. ‘Sure, my costume looks cobbled together from old spaghetti western and cheap fantasy movie props. We’re the Injustice Society, not the Rolling-in-Dough Society.’

We’ve all seen many shows hamstrung by wallowing in teen angst to the extent of losing the plot (or at least the attention of older and crankier viewers, like yours truly).

Yet Stargirl does the unexpected: it also runs directly at teen show tropes and stereotypes and makes them an enjoyable part of its composition.

Of course, we know that one parent will remain clueless about the heroine’s dual identity for a time. That the nerds and rejects will eventually become a vital part of Stargirl’s efforts to re-establish the JSA. That many of the seemingly benign and genial adults will turn out to be ISA members.

As for the resident mean teens, well, their part in the proceedings becomes all too clear in two terrific episodes, Shiv Parts One and Two (Episodes Seven and Eight).

Thanks to Bassinger, Stargirl has one of the most earnest and hopeful characters to headline a superhero series in some time. Sure, she stumbles (a lot), especially in her interactions with the seemingly obstinate and single-minded Cosmic Staff, and most of her early efforts at superheroics backfire spectacularly.

But Bassinger imbues Courtney with a dogged and contagious sincerity and optimism that makes the character endearing.

As much as it is Courtney’s origin story and gradual maturing, Stargirl also celebrates its unsung hero – Pat. Told time and again, and by various quarters, that he is not worthy or not capable, he quietly proves everyone wrong (even if some of them are no longer around to see it) by resolutely doing his duty, of keeping the JSA flame burning while struggling to be a good parent. And besides, he builds a bad-ass giant robot out of cars. Come on!

We’re about two-thirds of the way into the show’s debut season and it has been consistently fine, with little of the lazy writing that always bugs me about Arrowverse shows (Stargirl is directly DC-managed, but may cross over into the Arrowverse eventually).

The rich and complex supporting cast (performers and characters alike), the tantalising hints at the ISA’s sinister master plan, the charming awkwardness of the “new JSA” as it deals with its own dysfunctionality as well as two generations of the ISA – it all adds up to highly entertaining television where Johns and his collaborators celebrate all the best things about reading comics in every episode.

All this and a giant robot, too!