Lisa Kudrow and Steve Carell in a scene from the pilot episode of 'Space Force'.

As with most press junkets involving international actors during this global lockdown, the cast of Netflix’s Space Force is conducting virtual interviews via Zoom.

For this particular roundtable session with the South-East Asian journalists, Lisa Kudrow and Diana Silvers – who play mother and daughter in the series – are paired together.

At one point during the interview, Kudrow is listening intently to Silvers’ answer about what the latter was doing before the lockdown, that Kudrow momentarily forgets her turn.

After a moment of silence, Kudrow says “Oh”, laughs and adds: “It’s as if I’m one of you guys listening (and thinking) great answer. Oh, my God!”

Even when the screen is tiny, Kudrow’s expressions and unique way of speaking – punctuated with “yeah”, “so”, “like”, “you know” as well as some “oh my God!”, and accompanied by short pauses and laughs – are identifiable.

This is of course thanks to her most famous character, Phoebe Buffay on Friends. 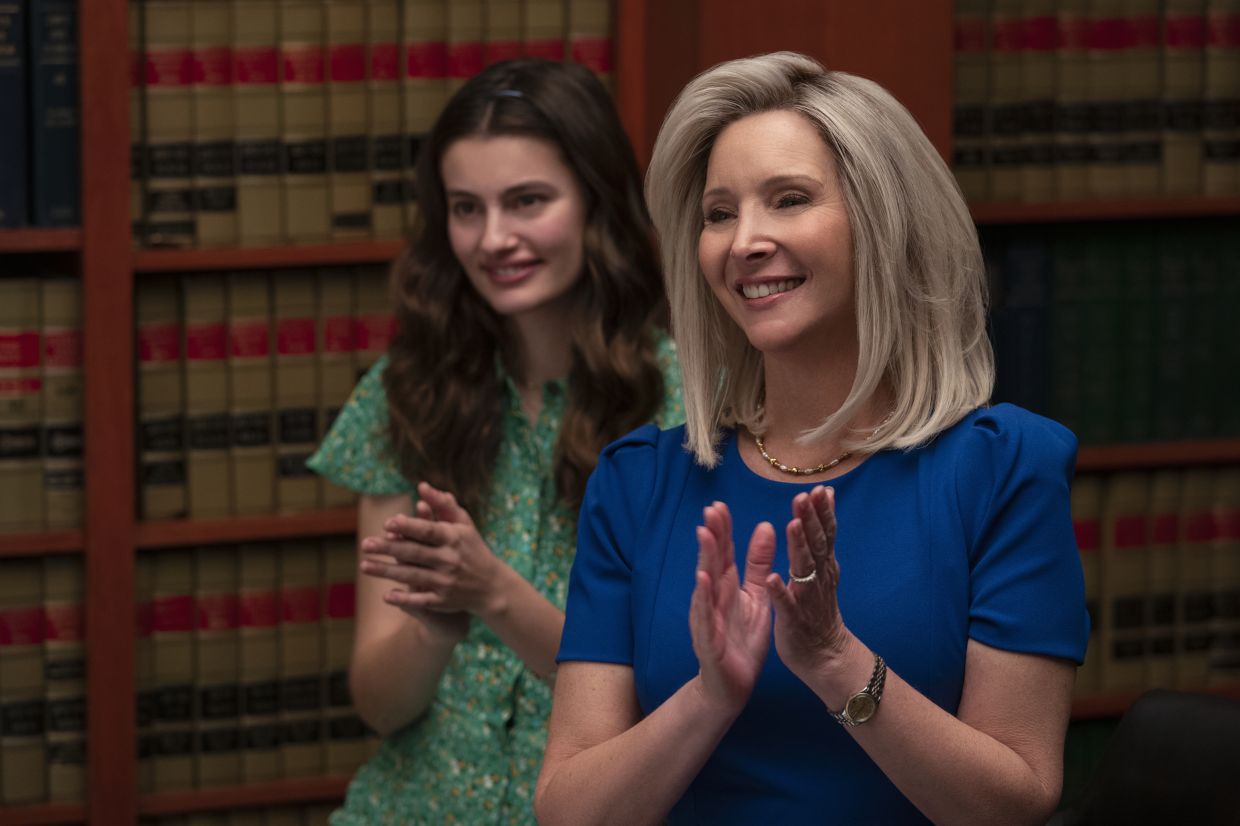 Lisa Kudrow (right) and Diana Silvers play mother and daughter in the show.Undoubtedly Kudrow can never get away from her Friends connection, what with a reunion special planned for HBO Max, which is now delayed.

But the 56-year-old has been on many other projects besides the popular sitcom including Web Therapy, Grace And Frankie as well as films Booksmart and Romy And Michele’s High School Reunion.

Recently, too, Kudrow has taken on the role of a producer.

She was just as busy when the pandemic hit. She shares: “I produce the American version of Who Do You Think You Are? And we were just in the middle of shooting an episode, and, yeah, that got shut down.

“And so, we’re just figuring out if there’s a way to pivot, or when we can be back up and running.

“I’m also doing an animated show, so I feel like that hasn’t really skipped a beat. We still have table reads; they do like scratch recordings, and send it off for animation.”

But right now, the Los Angeles native is on Zoom to talk about Space Force, in which she has a recurring role as the lead character’s wife. 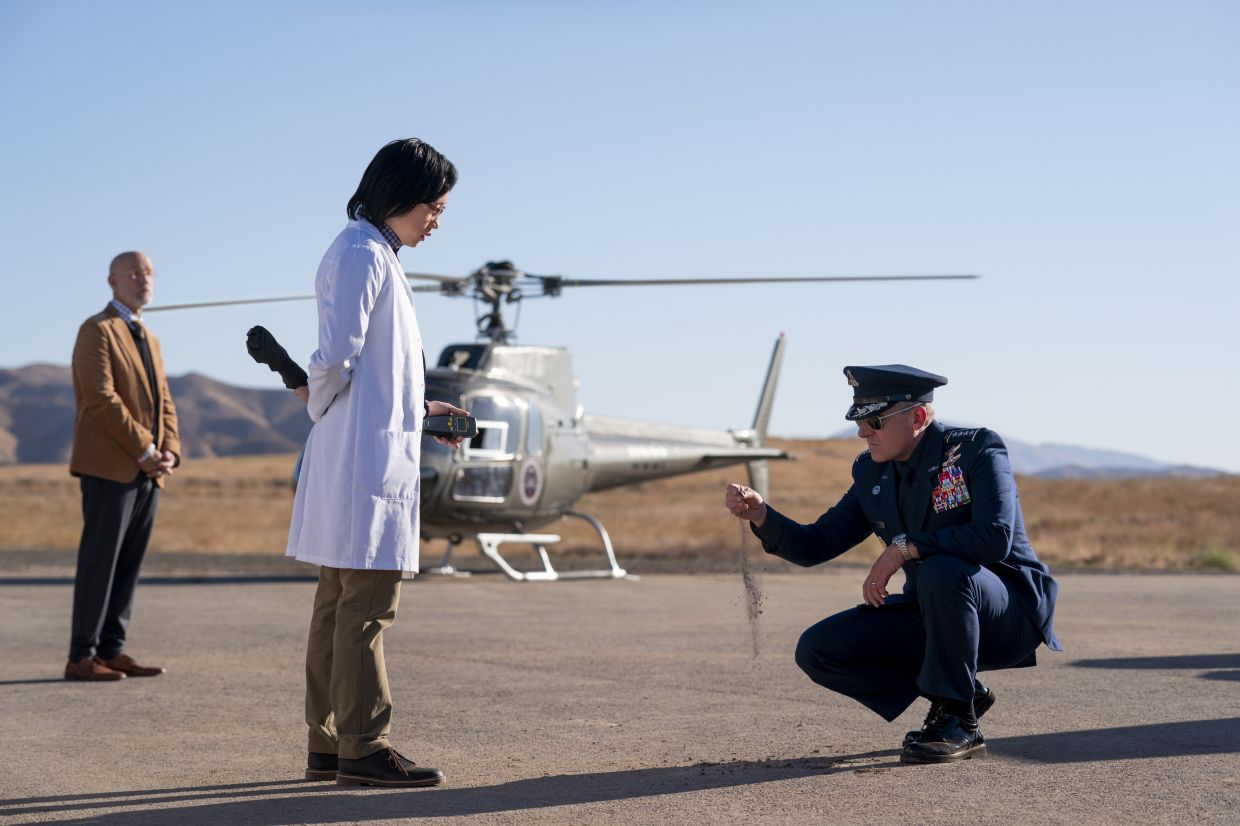 Join host and star Jimmy O. Yang (centre) on the podcast Inside Joke: Space Force Podcast starting from May 29.Steve Carell headlines this new series as Mark R. Naird, a decorated pilot and a four-star general, who is tasked to lead a newly formed sixth branch of the US Armed Forces called Space Force.

This branch’s ultimate goal is to put Americans on the moon (again) by 2024.

But Mark finds a lot of resistance, not only from the group of scientists he is working with – especially one Dr Adrian Mallory (John Malkovich) – but also from the congresspeople who are constantly questioning him about the vast cost his branch is incurring in trying to get the mission accomplished.

It doesn’t help that Mark is a military man and has little knowledge about science.

In the midst of it all, Mark must deal with a wife who is trying to find herself, and a teenage daughter who’s not happy the family has uprooted from Washington to a small town in Colorado.

Space Force also features actor Fred Willard, who passed away on May 15, in his last role as Mark’s senile dad.

According to Kudrow, Carell – who has appeared on Web Therapy with her – contacted her about the gig.

“I got a text from Steve, saying, you know, play my wife, it’ll be fun. And I replied, yeah, I know. That would be fun.”

But since it is only a recurring role, Kudrow didn’t get to work with many other Space Force actors.

“I only worked with Steve and Diana. I didn’t work with John Malkovich; I met him yesterday on a Zoom meeting. So that was thrilling, ” she tells us.

“But (the set), it was just comfortable, nice and creative. It was just my best version of what I was hoping it would be. Because you never know when you’re starting something.

"And they were practically finished when I came on, which was the very last days of the shoot.

“Everyone was very professional. There’s no, like, pranks or no messing with you or nothing like that. Everyone just wants to do a good job... and enjoy themselves while they’re doing it. That’s how I like to work too, so it was perfect.”

As for working with Carell, Kudrow says: “He’s really funny. Really present. And there’s no ego. There’s no, like, power issue.

“I don’t see that a lot these days anyway, with anybody, which is nice change but yeah, he just wants to do it well, and he wants you to do it well too.

“It’s always like, yeah, what can we do to make sure that, you know, you can do your very best. He’s fantastic.”

All 10 episodes of Space Force are available on Netflix.