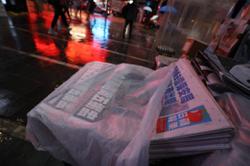 Sandy Lam announced on Facebook that she and Jun had 'consciously uncoupled in January 2019'. Photos: Rock Records (left) and Jun Kung/Facebook

He kept the beat for Hong Kong singer Sandy Lam, taking on drumming duties in her shows.

Musician Jun Kung, 42, was also her romantic partner for eight years but her manager has now said that the couple have split up.

Lam, 53, was previously married to well-known Taiwan musician Jonathan Lee, 61, with whom she has a daughter.

According to Apple Daily, her daughter, now 21, initially did not get along with Jun but he won her over after he taught her how to play the guitar and drums.

On Thursday (Feb 6), Lam posted about the separation, writing: "It was with hearts full of sorrow that we decided to move on our own paths after eight years of going through thick and thin together.

"This was a difficult decision but one we consciously made with deep love and caring for each other." – The Straits Times/Asia News Network