Awie and Erra Fazira are back together on the big screen for the new film Warna Cinta Impian. Photo: The Star/Shaari Chemat

The last time the once-engaged couple Erra Fazira and Awie were on the big screen together was 20 years ago in the film Tragedi Oktober.

The first time they worked together was in the 1994 film Sembilu which also spawned a sequel a year later. Around the same period too, the two stars got engaged before breaking it off in 1998.

Now they can be seen together again in the film Warna Cinta Impian.

At a press conference to promote the film, it’s obvious 42-year-old Erra and 47-year-old Awie have put their past behind to become friends and colleagues.

While Erra and Awie play secondary roles to the younger lead cast – Erwin Shah and Shiqin Kamal – in this film, they prove to be a valuable addition to the story. As though art imitates life, the characters they play also have a romantic past that ended in a tragedy. Ahem. 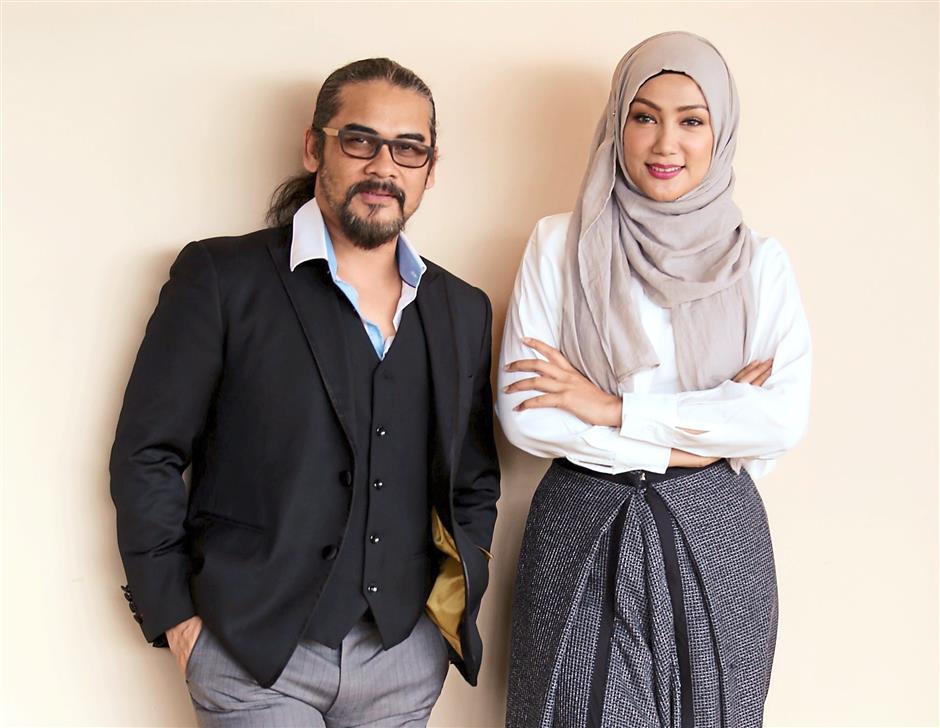 Awie and Erra may play the secondary roles in Warna Cinta Impian, but they are the film’s big stars. Photo: The Star/Shaari Chemat

First-time director N.S. Krishna said he couldn’t see anyone else in the roles of the elder siblings to the main couple other than Erra and Awie. Absolutely elated with their agreement to star in the film together, Krishna made sure the shoot was set around Awie and Erra’s available schedules.

Awie acknowledged this fact: “We kept troubling everyone with our busy schedules. I apologise for that and am truly grateful for everyone accommodating to us.”

However for 27-year-old Erwin, it was a dream come true to shoot with these veteran actors. “They are legends – we have watched them in movies since we were young – but they were very casual and helpful. It made the working environment very comfortable and relaxed,” said Erwin who is making his film debut with Warna Cinta Impian.

Meanwhile Erra admitted that she was drawn to the role because it brings a nostalgic feel to the Sembilu days. “For the sake of nostalgia, why not? Director Krishna and producer Ravindran (Govindasamy) were also very open to our suggestions to what our characters would be like and where our characters would be. So I felt no reason not to say yes to the film,” the actress explained.

Despite wanting the Sembilu connection, it was equally crucial to Awie and Erra to make sure the characters in the new film stand apart too. For one, Erra’s character is not named Wati (like in Sembilu).

Awie added: “Although our characters no longer has a relationship when they meet again in the film, I felt it was important that the presence of their past relationship registers with the audience.”

The RM2.7mil film starts off with the marriage of Daniel (Erwin) and Diana (Shiqin), arranged by Diana’s brother Awie who believe they are well-matched.

Sensing neither is keen on the other, Awie then plans for the young couple to spend some time together in Jaipur, India. Unknown to Awie, both Daniel and Diana still haven’t gotten over their respective former lovers. When things turn for the worse, Erra and Awie try to counsel the couple. But the bumps on the road keep getting worse.

While it remains to be seen if the young couple will get a happy ending in Warna Cinta Impian, the film does set the stage for another story ... one that involves Erra and Awie.

Erra, who is a two-time Best Actress winner at the Malaysia Film Festival, teased: “If this film does well, there is a future plan (for another film involving Awie and my character).”