Tremble before Doom, Marvel's most nefarious villain for 60 years!

Doom proved himself to be one of the Marvel universe’s most powerful characters when he singlehandedly saved the Multiverse in 2015’s Secret Wars. — Photos: Marvel Comics

With the assembling of the Avengers, the homecoming of Spider-Man, Thanos’ endgame, the return of the Eternals, the emergence of the Multiverse, and the first mention of mutants on the recent finale of Ms Marvel, you’d be forgiven for thinking that the Marvel Cinematic Universe is complete. But you’d be wrong, because we’re still missing one crucial element – the Fantastic Four, and with them, Marvel’s most dastardly character ever, Dr Victor Von Doom! 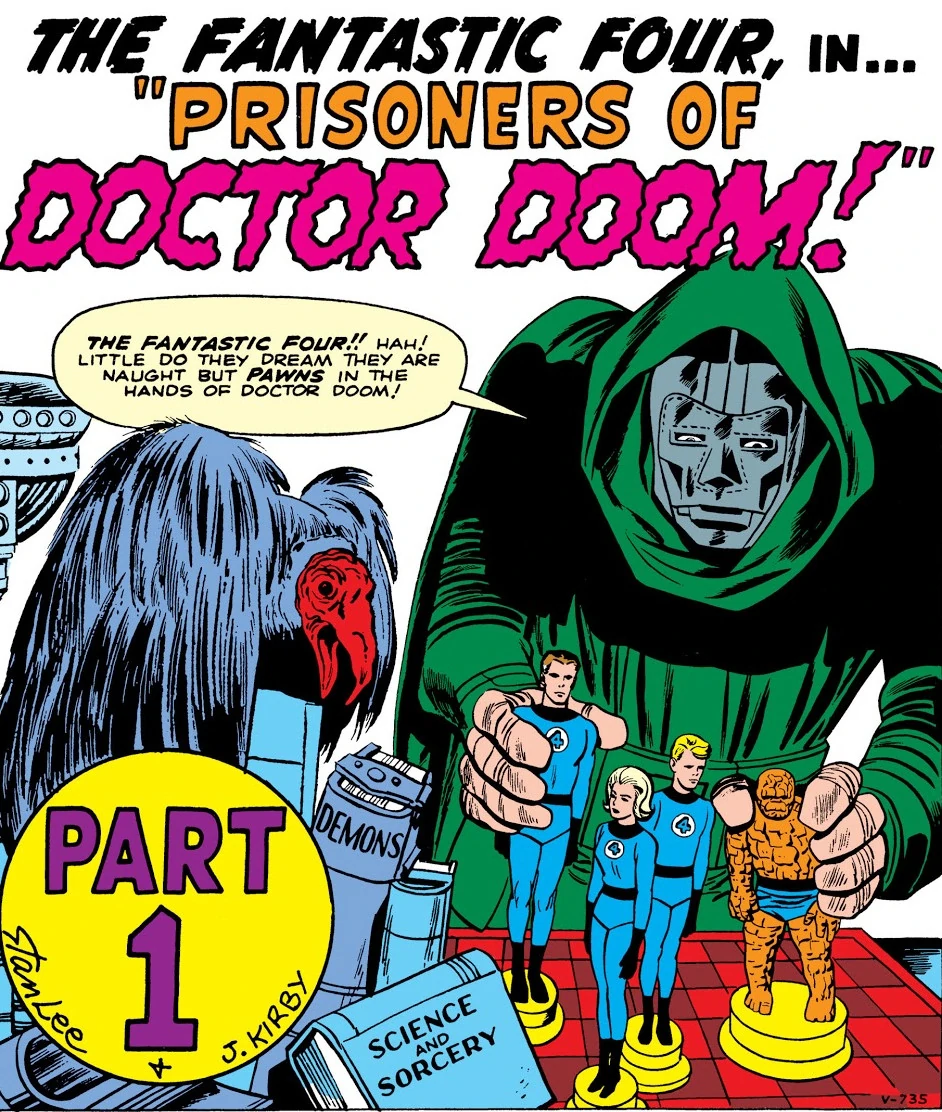 Doom made his debut in the pages of 'The Fantastic Four' (Vol.1) #5 (July, 1962).In case you didn’t notice, I’ve avoided using the term “villain” for Doom, as his larger-than-life character extends far beyond any role, designation or title. He is simply Doom in every sense and the personification of the word.

His co-creator Jack Kirby (alongside Stan Lee) clarified in a 1987 interview that: “Dr Doom is an evil person, but he’s not always been evil. He was (respected) but through a flaw in his own character, he was a perfectionist.”

ALSO READ: Move over, Iron Man: The Metal Men are heroes that are actually made from metal

Now, forget everything you know about Doom from the four Fantastic Four movies. As far as I am concerned, those did not feature the “real” Doom, and if his kingdom of Latveria actually existed in real life, they probably would have sought an injunction on those inferior portrayals of their leader.

For the past 60 years since making his debut in the pages of The Fantastic Four (Vol.1) #5 (July, 1962), Doom has terrorised the Marvel universe (and saved it at one point). Hence, today we pay tribute to Marvel’s ultimate Doom. No other titles have come close to demystifying Doom’s ascension from Gypsy wanderer to world conqueror than 2005's 'Books Of Doom'.While the comics, cartoons and the movies have always portrayed Doom as a megalomaniac hell bent on destroying the Fantastic Four and ruling the world, the truth is what initially drove him to this path is the purest act in all humanity – he wanted to save his mother’s soul from Mephisto.

Victor was raised by his father, Werner (a gypsy healer) in the fictional East European country of Latveria. His mother, Cynthia, was a sorceress whose soul was captured by Mephisto, after seeking his help to free her people from oppression by a cruel baron.

Things got worse for young Victor when his dad was unable to heal the baron’s terminally ill wife, leading to both father and son fleeing their home. While Werner succumbed to the harsh weather conditions during their escape, Victor survived and vowed to avenge his the death of his parents – which he eventually did by returning to rule Latveria.

There are many stories about Doom’s origins, which proliferated from the original Lee and Kirby template (Fantastic Four Annual #2), but none have come close to demystifying Doom’s ascension from Gypsy wanderer to world conqueror than Ed Brubaker and Pablo Raimondi’s 2005 Books Of Doom.

The revelations and details in this six-part series are startling: The events leading to Cynthia’s death, Verner’s final act in saving Victor, Doom’s annual battle with Mephis-to, how Doom got his doctorate, Victor and Valeria’s relationship and where Doom got his style.

In issue #10 of Secret Wars (1985), Doom sealed his fate as the Marvel Universe’s greatest fighter by defeating both Galactus and the Beyonder within the same issue! While he could have just used Galactus’ powers to slay his enemies and clinch the Beyonder’s prize, Doom’s ego sums it up best – “I am Doom! As long as I knew there was one greater, I could never rest!”

This belief and arrogance has made Doom a natural survivor. Hence, you can go read up his time-travelling adventures (past and future ones), where he always triumphs despite the massive odds stacked against him. 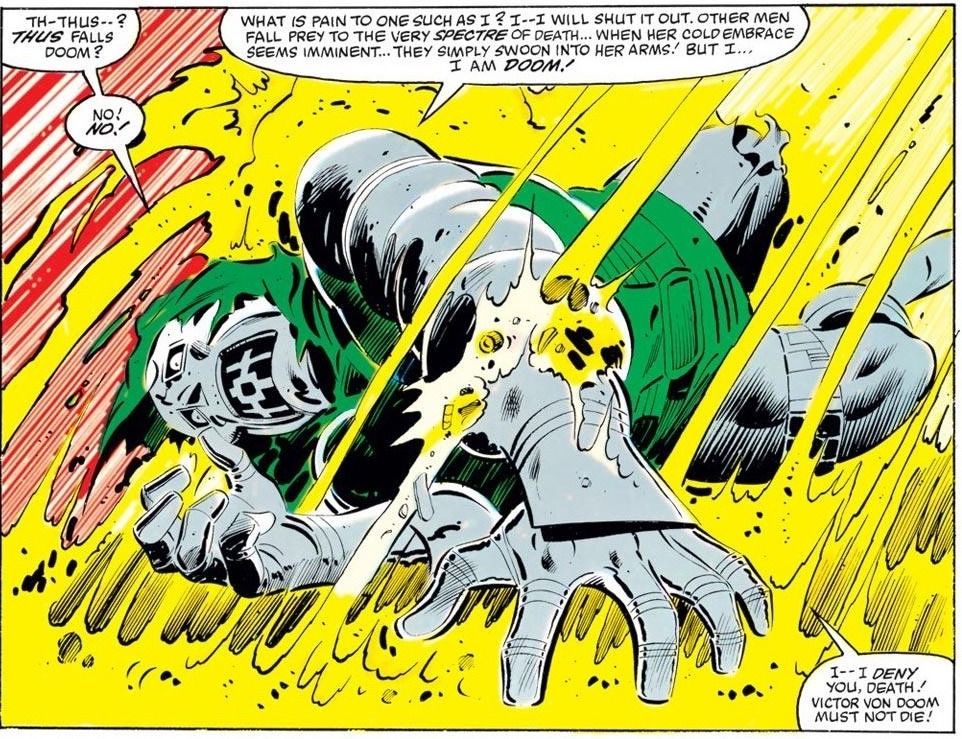 In issue #10 of Secret Wars (1985), Doom defeated the Beyonder single-handedly despite the massive odds stacked against him.

Perhaps the only time when Doom (allowed himself) to play second fiddle was in the 1989 Doctor Strange & Doctor Doom: Triumph And Torment graphic novel, where Doom sought Strange’s help to free his mother’s soul from Mephisto’s realm. This classic tale sheds the arrogance synonymous with Doom, as he uses humility and wit to achieve his long-awaited quest.

Apart from willing to take a back seat to the Sorcerer Supreme, Doom even deceives Mephisto aka The Prince of Deception not once but twice in this tale. First, by making Mephisto believe that he (Doom) has betrayed Dr Strange by switching alliances.

Second, by playing along with Mephisto’s scam to free his mum’s soul, knowing that she would reject him (Doom) for his act of betrayal on Dr Strange. At the end of the day, Doom was willing to sacrifice his mother’s love just to see her soul freed from Mephisto’s clutches. The only time Doom played second fiddle is in the1989 Doctor Strange & Doctor Doom: Triumph And Torment graphic novel.

Many may view Thanos’ genocidal act as the ends justifying the means, but Doom has offered more practical solutions. To the outside world, Doom’s rule over Latveria is simply iron fisted, but the country’s population would beg to differ. In return for peace and prosperity, all Doom demands is complete loyalty to him. The Fantastic Four overthrew Doom from the throne of Latveria in Fantastic Four #200.The FF did help overthrow Doom (Fantastic Four (Vol.1) #200 but the post effect was more devastating as Latveria succumbed to all the turmoil and vices impacting most countries. Eventually, Doom did return to restore the country’s prosperity and of course, its sovereignity!

Doom even replicated his country-development plans on a global scale during the Emperor Doom story, where he utilises the Purple Man’s mind controlling powers to create utopia on Earth. While it does deprive the world’s population of the freedom to think and oppose, it also offered a world without crime, famine, prejudice and war.

Heck, even the Panther God of Wakanda can attest (Doomwar #3) to the fact that Victor Von Doom genuinely wishes for a utopian future where humanity thrives, albeit one where he is in power.

The Fantastic Four, Avengers and X-Men have saved Earth on countless occasions but all this feats are eclipsed by Doom’s act of saving the Multiverse.

During the 2015 Secret Wars event, Doom (with the aid of the Molecule Man and Dr Strange) foiled the Beyonders’ plan to destroy the Multiverse. That’s not the only highlight, as Doom also upstaged Reed Richards, whose best act (then) was to build a small raft to save a few lives from the collapsing universe. Doom even once tried his hand at being a hero as the Infamous Iron Man.Yes, Doom has tried to rule the world on countless occasions! In the process, he has even tried to destroy the Fantastic Four, sacrificed his first and only true love, Valeria, enhanced the Scarlet Witch’s hex powers leading to the Avengers Disassembling, and even mind controlled 99.99% of Earth’s population.

However, despite all that, he is still mummy’s boy, adopted and raised Kristoff Vernard like his own son, saved Reed and Sue Richards’ second child Valeria (and even became her godfather), cured Johnny Storm from overcharging, resurrected Cassie Lang and Brother Voodoo and even once took over Tony Stark as the Marvel universe’s Infamous Iron Man.

Villain, hero or anti-hero? Whatever way you choose to perceive Doom, one thing is for sure – the Marvel Cinematic Universe needs him.

By George he did it: How legendary comics creator George Perez changed the comics industry

Celestial wonders: Who are those giant universe-creating beings in 'Eternals'?