A sculpture entitled 'Antelope' by Malawi-born artist Samson Kambalu, is pictured after being unveiled on the fourth plinth in Trafalgar Square in London on Sept 28. Photo: AFP

Samson Kambalu's post-colonial sculpture Antelope was unveiled on Wednesday as the new sculpture on the empty Fourth Plinth of London's Trafalgar Square.

He was later killed by colonial police and is commemorated in Malawi on John Chilembwe Day, which marks the beginning of the Malawi independence struggle.

The sculpture is the latest in a rolling programme overseen by the mayor of London that began in 1998 to showcase contemporary art on the empty plinth.

Previous installations have included a giant ship in a bottle and a swirl of replica whipped cream, topped with a sculpted cherry, fly and drone.

At Chilembwe's side in Kambalu's sculpture is his friend and supporter, the European missionary John Chorley.

The artist said it was designed to shed light on Britain's colonial legacy in southern Africa.

"People present colonialism as a kind of conqueror and victim (story)," said Kambalu at the unveiling.

Chorley is life-sized, while Chilembwe is "larger than life" - elevating the pastor's story and Britain's colonial past into the public eye.

"There's a lot to be addressed," said Kambalu.

Kambalu said that by highlighting what he said was Britain's failure to address its colonial legacy in southern Africa, such as Malawi, he hoped his work would shed light on this "hidden history".

Both figures in the sculpture wear hats - a banal feature at a first glance but evoking the colonial prohibition which barred African men from wearing hats in front of a white person.

Antelope is the 14th commission in the programme.

"It sparks conversation with the general public. Everyone loves to have an opinion about the Fourth Plinth. It generates debate," said Justine Simons, deputy mayor for culture and the creative industries.

The sculpture will be succeeded in 2024 by Teresa Margolles' 850 Improntas (850 Imprints), which features casts of the faces of 850 transgender people from around the world.

Recent calls by MPs and others have urged the Mayor of London to feature a statue of the late Queen Elizabeth II on the Fourth Plinth.

"That will be a decision for His Majesty the King, at the appropriate moment," said Simons.

"It's a programme that's been going for 20 years, and we've got at least another four years of sculptures already commissioned." - AFP 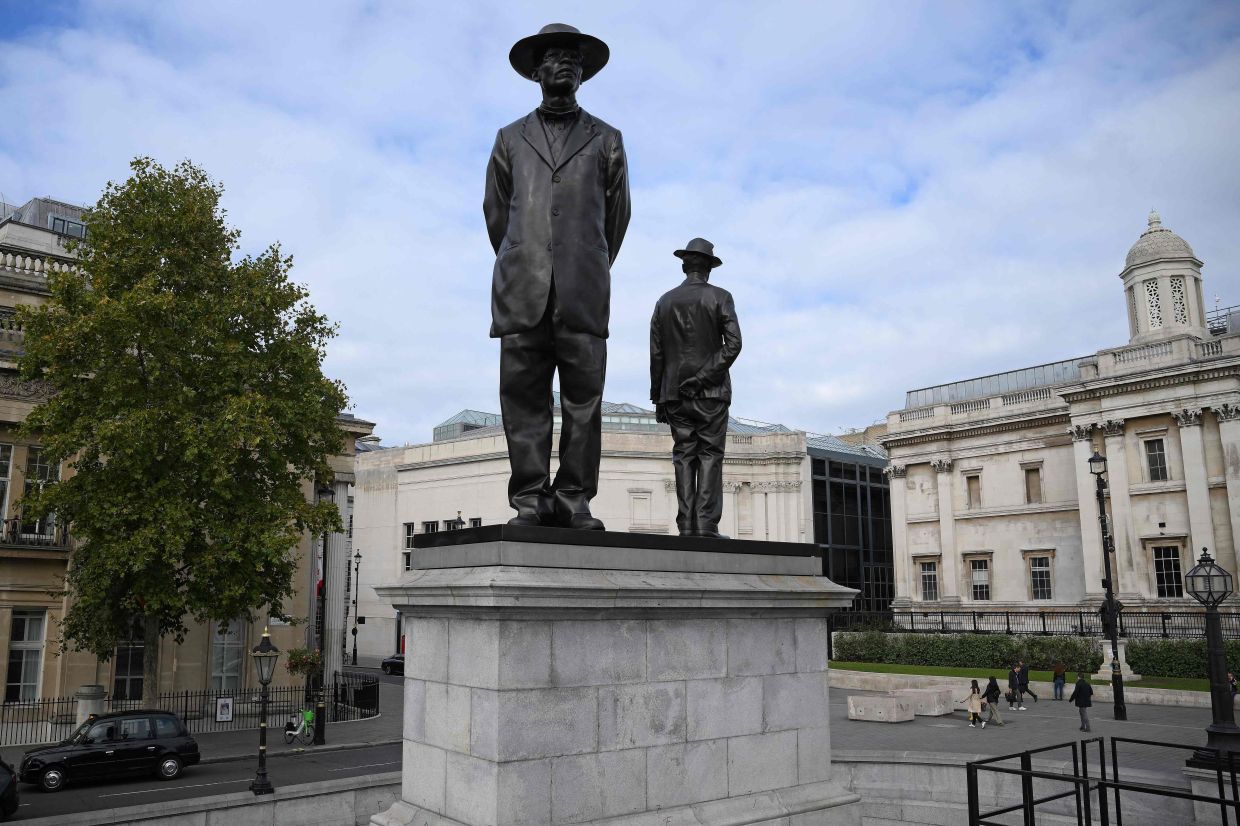 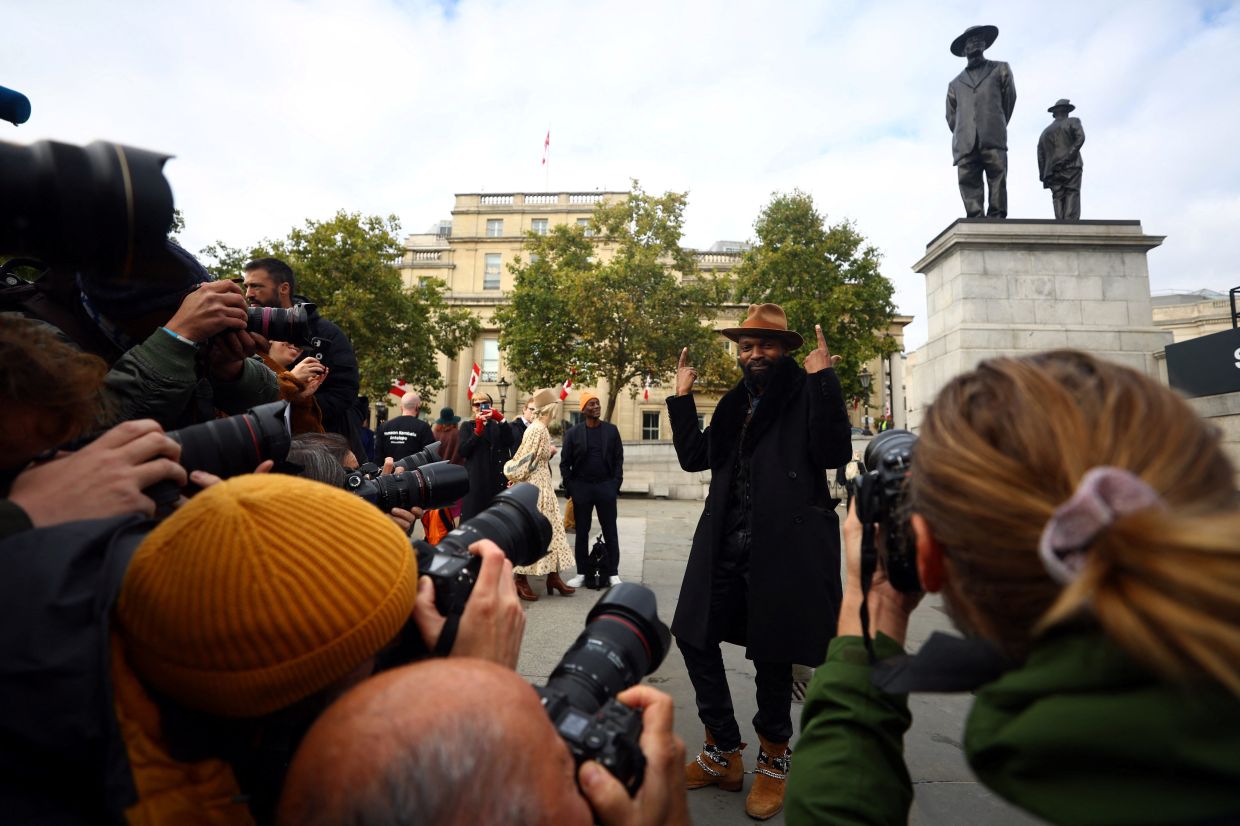 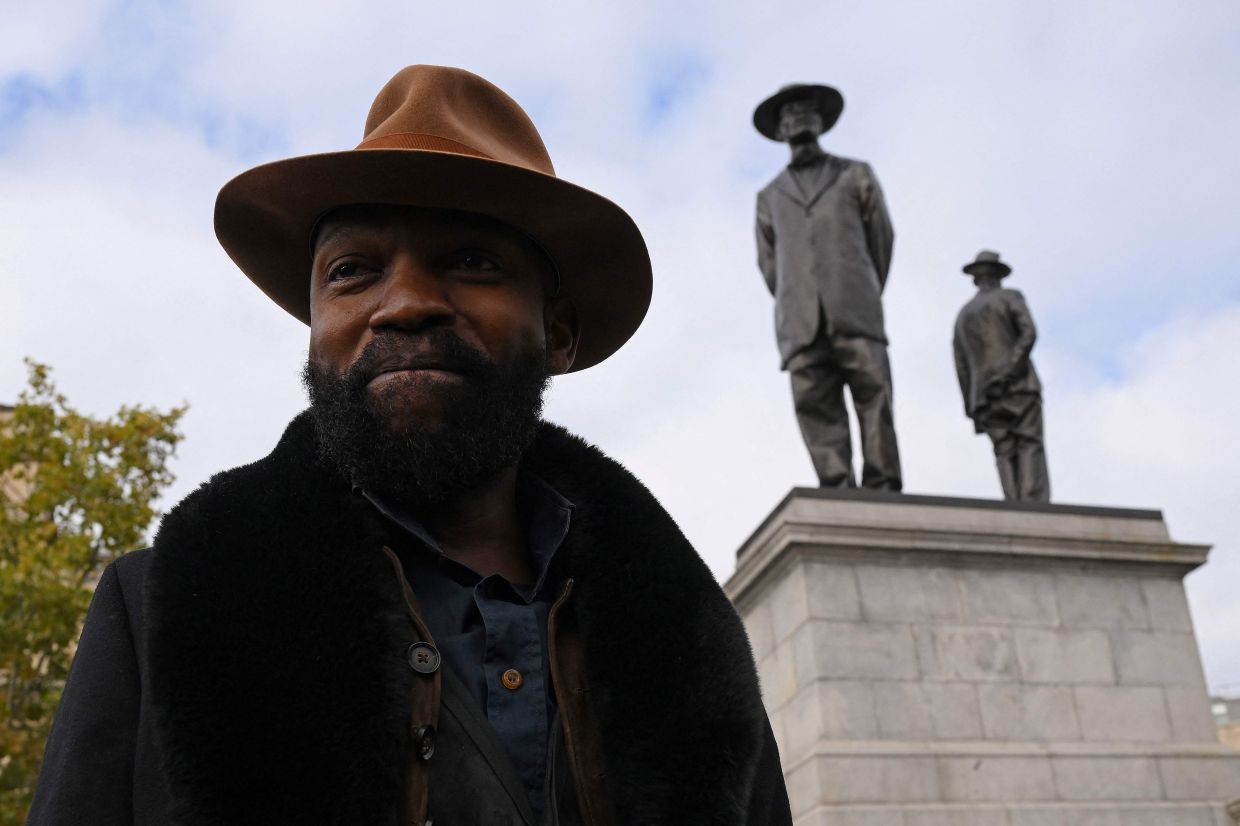 A sculpture entitled 'Antelope' by Malawi-born artist Samson Kambalu, is pictured after being unveiled on the fourth plinth in Trafalgar Square in London on Sept 28. Photo: AFP

Samson Kambalu poses for photographers in front of his sculpture 'Antelope' in London. Photo: Reuters

Kambalu's sculpture 'Antelope' is seen after it was unveiled on Trafalgar Square's Fourth Plinth, in London. Photo: Reuters

"People present colonialism as a kind of conqueror and victim (story). But actually, it's more complex than that. There are heroes on both sides. There is dignity on both sides," says Kambalu. Photo: AFP