The next edition of the Art Basel Hong Kong contemporary art fair will take place from May 25-29. Photo: AFP

For several months now, a new type of content creator has been springing up on social networks: art influencers. If they have quickly become the darlings of museums, art fairs are still reluctant to call on these art world newcomers.

Now, Art Basel plans to welcome them to its next edition in Hong Kong, but only on certain conditions. Since its inaugural edition in 2013, Art Basel Hong Kong has attracted different types of audiences, from art collectors to gallerists and dealers, artists, journalists and now influencers.

The fair's organisers have recently decided to offer content creators the opportunity to get accredited, in order to take their followers behind the scenes of the event.

However, they will have to follow several rules of good conduct, reports Artnet News. For example, there's no question of doing "lives" in the aisles of the fair, let alone photographing other visitors without their permission. Accredited influencers are also asked to ensure they credit the artists whose works are exhibited, as well as mentioning the @artbasel account in their posts.

The aim of this initiative is undoubtedly to help the art fair reach a younger audience and to capture the interest of a generation that spends several hours a day on smartphones.

"Social media has become part of the broader media landscape over the last decade, and we are aware that is an important platform for our galleries and artists," an Art Basel spokesperson told Artnet News.

The organisers of Art Basel are, however, being strict with influencers wishing to participate in the next Hong Kong edition of the contemporary art fair, running May 25-29. Accreditation requests will be studied on a case-by-case basis, and will be limited to the content creator alone.

"Anyone found in violation of these rules or being disruptive can be removed from the show floor at any time," wrote Art Basel Hong Kong officials in an internal document, seen by Artnet News.

The presence of influencers at Art Basel Hong Kong attests to their growing importance in the art world. Some of France's finest include La Minute Culture, Mr. Bacchus, Whereverhugo, Imaginez-moi, Culturez-vous and Margaux Brugvin. They don't have millions of followers on Instagram, but they have managed to attract the interest of the country's cultural institutions, which no longer hesitate to call on them to reach a new, more diverse - if not to say younger - audience.

The tone is clearly set. However, art fairs would have everything to gain by partnering with influencers to boost their presence on social media. This is where a new generation of art collectors is shopping, according to a recent annual report from the specialist insurance firm, Hiscox. In fact, 40% of them say they are influenced by Instagram and other such platforms when it comes to buying art. 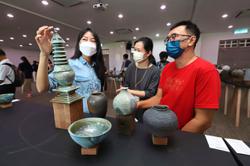