The Malaysian Real Book project, which was launched recently as a physical book and digital release, showcases the diverse composers and pioneers in the early Malaysian music scene while also spotlighting new generation composers and songwriters.

This music book "database", which overcame numerous pandemic disruptions, represents a community initiative to compile, document, transcribe and present an extensive repertoire of Malaysian jazz and popular music. It offers an anthology of playable sheet music that will benefit music enthusiasts, students and professionals.

A songbook for Malaysians

“With the breakdown of the categories, the book represents the many facets of Malaysian music: popularity, cultural values, artistic values and heritage,” says composer/pianist Tay Cher Siang, one of MJPF’s co-founders.

“A lot of thought has been put into the selections, and we consulted many parties in making the selection,” he adds.

The Malaysian Real Book, which also saw a concert series to coincide with its launch last weekend at KLPac, is a versatile and and valuable educational tool to benefit professional musicians and music enthusiasts. This archival work, spearheaded by composers/musicians, is a useful resource to help young Malaysians learn more about the nation's musical heritage.

“Preservation of our musical culture is definitely one of the goals we hope to achieve with this book. We also hope that this is the beginning... with more future (archival) initiatives ahead.

The initial proposal was made in January 2020 and the project team, led by veteran pianist/composer Michael Veerapen (the founder of the Malaysian Jazz Piano Festival), worked through the pandemic to realise the project. The committee also raised funds for the book in November 2020 through an online streaming concert called the Malaysian Jazz Marathon. 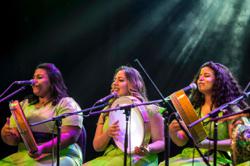