Tigers that roamed through the art world, a fierce legacy

The majestic tiger is revered by many cultures for its beauty, prowess, ferocity and spirit. As a creature with many symbolic attributes, it has inspired imagination, paintings and stories all over the world.

In China, legend has it that tigers turn white after living for five centuries, and that a white tiger would appear only if an emperor were to rule with absolute virtue.

Another belief is that a tiger’s spirit would enter Earth after its death, and become amber.

The tiger represents the greatest earthly power, with the ability to ward off the three major disasters of the household, namely fire, thieves and ghosts.

Paintings of tigers are often hung on a wall inside a building facing the entrance to keep evil spirits at bay.

The earliest tiger statues in China appeared in the Neolithic Age, which is about 7,000 years ago.

While a tiger’s actual lifespan is significantly shorter than its millennium-long reign in folklore, it doesn’t put a damper on mankind celebrating this ferocious beast.

As we usher in the Year of the Tiger, here is a look at what a sultan obsessed with tigers once ordered, artists who paint tigers, and art pieces featuring this magnificent creature and everything it embodies.

This 18th century musical automaton, depicting a tiger attacking an European man, was made for Tipu Sultan, the ruler of the Kingdom of Mysore in India at a time when the British East India Company was expanding the British empire in India.

The sounds produced by the organ in the tiger’s body are intended to resemble the roar of a tiger intermingled with the shrieks and cries of a person in distress. When the crank is turned, the organ plays and the hand of the man is lifted up, no doubt a sign of surrender and to express his helplessness as he is devoured by the beast.

Opinions are split on whether this figure is a soldier or civilian, but it has been proposed that the design is inspired by the death of Hugh Munro, a young East India Company Cadet, who was killed by a tiger while hunting with his companions.

At any rate, the Sultan used the tiger systematically as his emblem, employing tiger motifs on his weapons and palace decorations, as well as on the uniforms of his soldiers. His throne also features a large tiger.

Today, Tipu’s Tiger is one of the highlights of the Victoria and Albert Museum in London, replicated in numerous forms of memorabilia such as postcards and plush toys in the museum shop. In the HBO series Succession, the lead publicity shot for its first season in 2018 shows Logan Roy, founder of media and entertainment conglomerate Waystar Royco, and his four children, posing in front of Flemish artist Peter Paul Ruben’s The Tiger Hunt.

This large painting, depicting a hunt for a tiger, dates back to between 1615 and 1616.

This scene incorporates a few other animals, including a lion and a leopard, but the tiger takes centre stage, pouncing on a rider on a horse that rears up in fear.

At their feet, a tigress is trying to save her cubs, carrying one in her mouth while another two cubs cling to her limbs.

The Tiger Hunt is one of the four hunting paintings commissioned by Maximilian I, the Duke Of Bavaria who reigned from 1597-1623, to decorate the Schleissheim Palace in Munich, Germany. 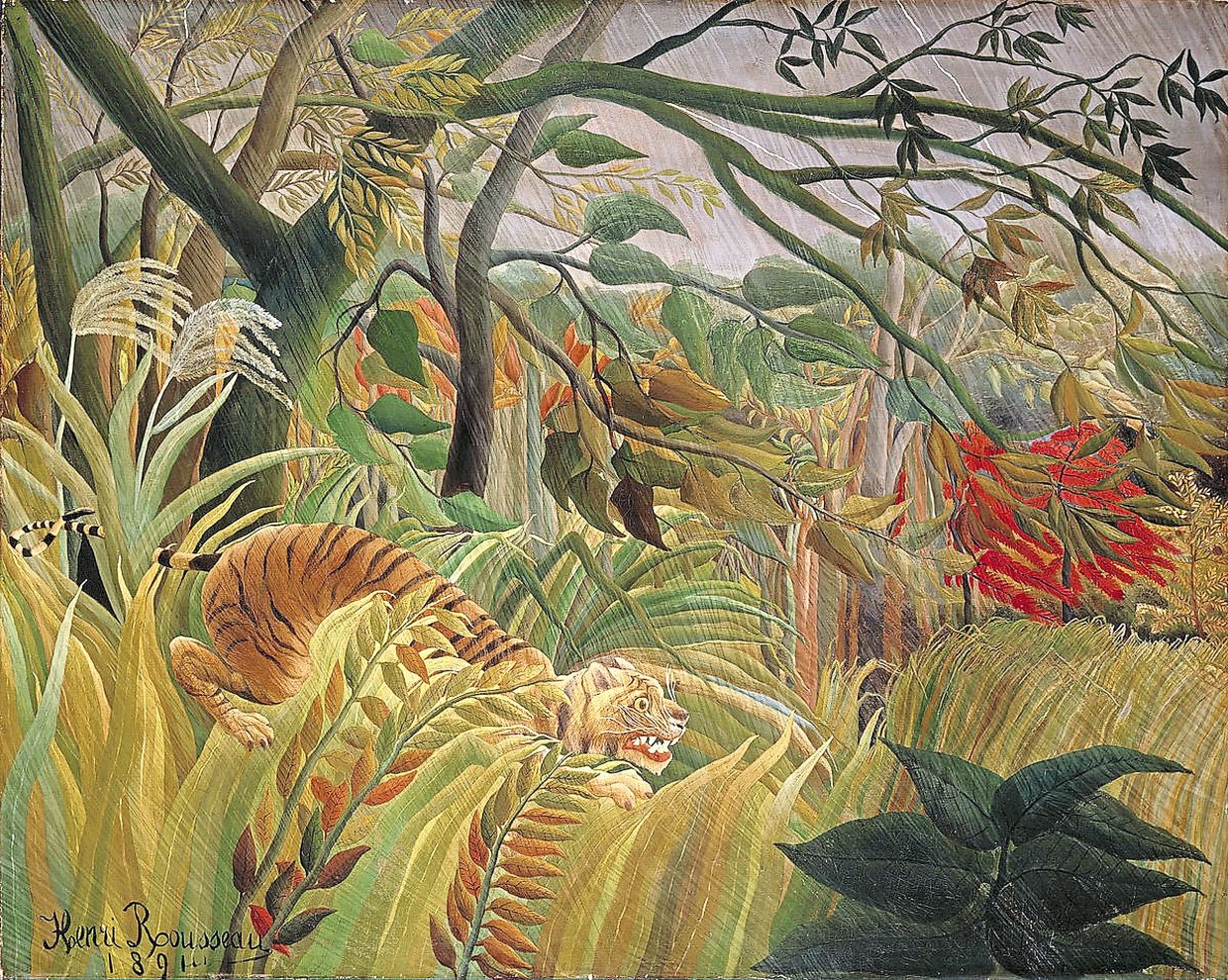 Henri Rosseau’s 'Tiger In A Tropical Storm' (oil on canvas,1891) was the first of the French legendary artist’s jungle paintings.

In this 1891 oil painting from French painter Henri Rosseau, the crouching tiger, illuminated by a flash of lightning, is preparing to pounce on its prey in the midst of a raging storm.

There were claims that these jungle scenes were inspired by his travels through Mexico as a regimental bandsman.

But the Frenchman had never left France and it is more likely that his inspiration for the painting’s vivid greenery came from the botanical gardens of Paris, such as Jardin des Plantes, located down the street from where he worked.

This botanical garden also had a taxidermy gallery of exotic animals, so it is possible that he sketched from that.

Tiger In A Tropical Storm is Rosseau’s first “jungle painting” which brought him recognition and started his famous streak.

His initial submission of this painting was not accepted by the jury of the Académie Royale de Peinture et de Sculpture (Royal Academy of Painting and Sculpture) in France, so he exhibited it at the Salon des Independants instead, which was open to all artists.

Reviews were mixed – some critics called the painting “childish” and the flat appearance of its figures did not sit well with everyone. But he gained a following among a younger generation of artists, including Pablo Piccaso who admired the liberties he took with his art.

It would be several years after Tiger In A Tropical Storm before Rosseau produced his subsequent jungle-themed work, like Scouts Attacked By A Tiger in 1904 and The Hungry Lion Throws Itself On The Antelope in 1905.

Chinese painter Hu Zaobin is famous for his tiger paintings. Hu Zaobin’s 'Victory Or Defeat' is pictured in this image.

Early 20th century Chinese painter Hu Zaobin is famous for his tiger paintings. Born in Guangdong in 1897, he studied art in China and later went abroad to Japan to study Western fine arts and Japanese-style painting at the Kyoto Municipal Art Institute where he developed his now distinctive and famous style of painting the tiger.

In the 1920s, he toured South-East Asia to observe and take photographs of wildlife that would later serve as references for his work.

Hu was based in Hong Kong when World War II broke out. He attempted to return to rural China with his family, but was caught, and his paintings confiscated.

He died at the young age of 46, leaving behind some of the most famous tiger paintings of his time.

Victory Or Defeat, one of his many tiger art pieces, is an awe-inspiring artwork that captures the strength and agility of this mighty beast.