New independent event ARTisFAIR in KL, which bypassed art galleries, boasted more than 2,000 artworks by over 500 artists from Malaysia and Indonesia. Photo: The Star/Muhammad Shahril Rosli

It was all systems go for local art, once the pandemic restrictions were eased in Malaysian in September. How many exhibitions and art fairs could you squeeze into the last quarter of the year? A lot, apparently.

From the 2,000 artworks at ARTisFAIR spanning four floors of a mall in Kuala Lumpur, to the 1,000 artworks squeezed into the small space that is The Back Room KL at Red Hong Yi’s Artists Of SEA 1000 Tiny Artworks showcase, the local art scene has been busier than it has ever been since the pandemic struck.

Events that were previously postponed found their way back into the spotlight.

The National Art Gallery held its Malaysia Art Ecosystem Festival – a rather indistinguishable event – at the World Trade Centre KL earlier this month.

As we speak, more new art fairs are probably being planned.

Cutting through the noise

“This pandemic is pivotal. It brings out the best and worst of artists, sponsors, cultural agencies, institutions, curators, gallerists, collectors and the viewing public. But we shouldn’t forget that the most important value, I think, is work,” says Jaafar Ismail, Fergana Art founder and show curator.

With the arts itinerary bursting at the seams these past few weeks, is this momentum going to hit a wall in 2022?

Many of the recent programmes were made possible with funding by government agencies. What are the implications that come with this?

“Art making is a costly affair, both in terms of time and money. Funding is crucial as costs have risen, consequent to the supply chain crisis in the wake of the pandemic. The ethical aesthetic risk is of course in preventing the creative outcomes from being subsumed by the social, political, ethical persuasions and moral codes of the financial sponsor,” says Jaafar. 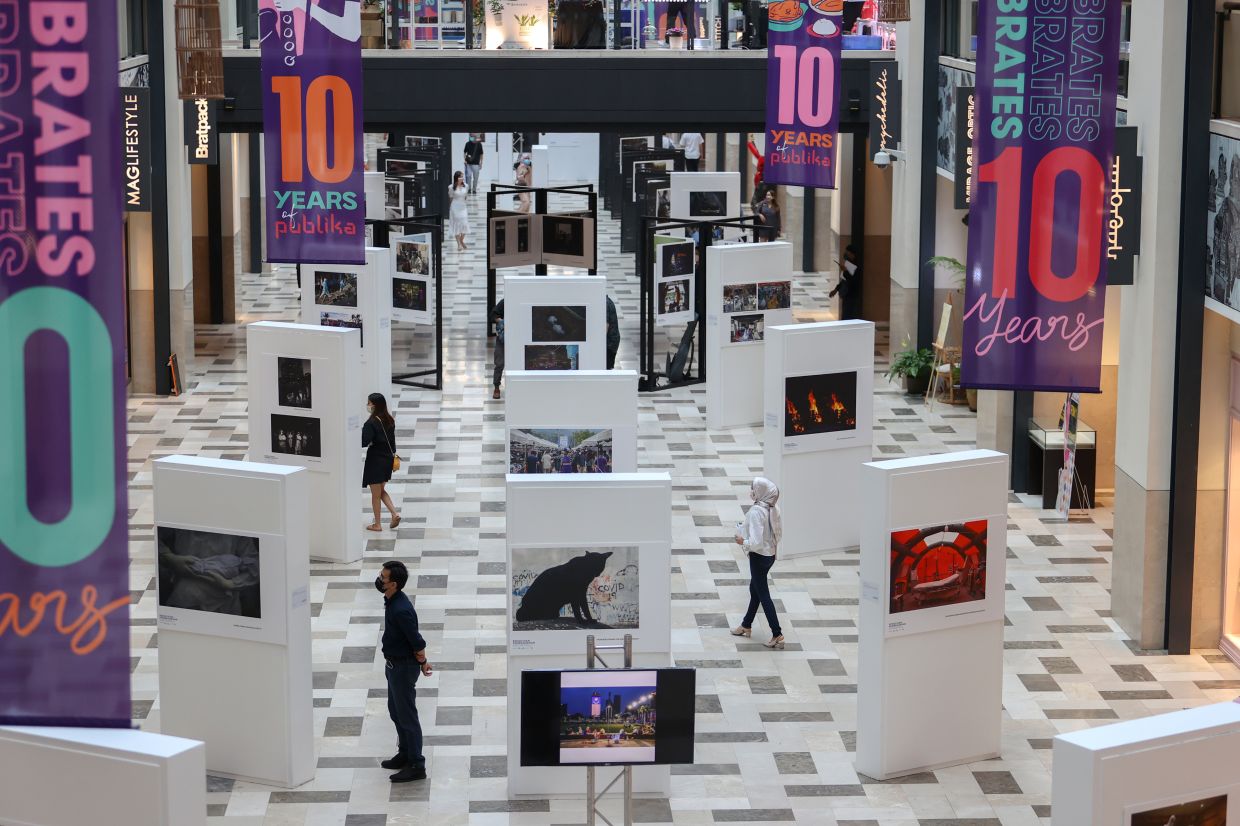 Fergana Art's 'Pemulihan: Pembaharuan' exhibition at in Kuala Lumpur in November presented an array of art and photography. It was part of an ongoing project to document, chronicle and publish a visual and textual narrative of the Covid-19 pandemic in Malaysia. Photo: The Star/Glenn Guan

But self-censorship has always been prevalent in Malaysia, with or without the need to accommodate external factors.

“So I cannot be certain that those ‘easy on the eyes, tame, saccharine-laced and well constructed graphic representations’ are outcomes of self-censorship consequent to monetary sponsorships. Perhaps, Malaysian creatives are just decidedly polite, docile and insipid?” he muses.

Maybe we should just enjoy the ride while it lasts.

Beyond the Klang Valley

While events largely concentrated in the Klang Valley, there were notable shows in other states that created a buzz, like Yee I-Lann’s homecoming show Borneo Heart in Kota Kinabalu.

“The great potential and challenge of making shows outside of the Klang Valley is that you may be working from scratch, or at least with much less of the set expectations, formats, infrastructure and resources you might get in a more ‘developed’ art scene like KL.

“The thing to avoid is thinking you can cut and paste a KL gallery style show or art fair into another local context. An exhibition is a space to build new conversations and meanings, and so it is great to be able to create such spaces wherever you can. Borneo Heart showed us how an exhibition can be a truly activated space,” says Beverly Yong of RogueArt, which managed the show.

“If we had mounted a show of abstract paintings in the same space, there wouldn’t have been the same level of response,” she says.

Yong describes it as one of the most rewarding exhibition projects the team has worked on, because of the way the general public engaged with the show. 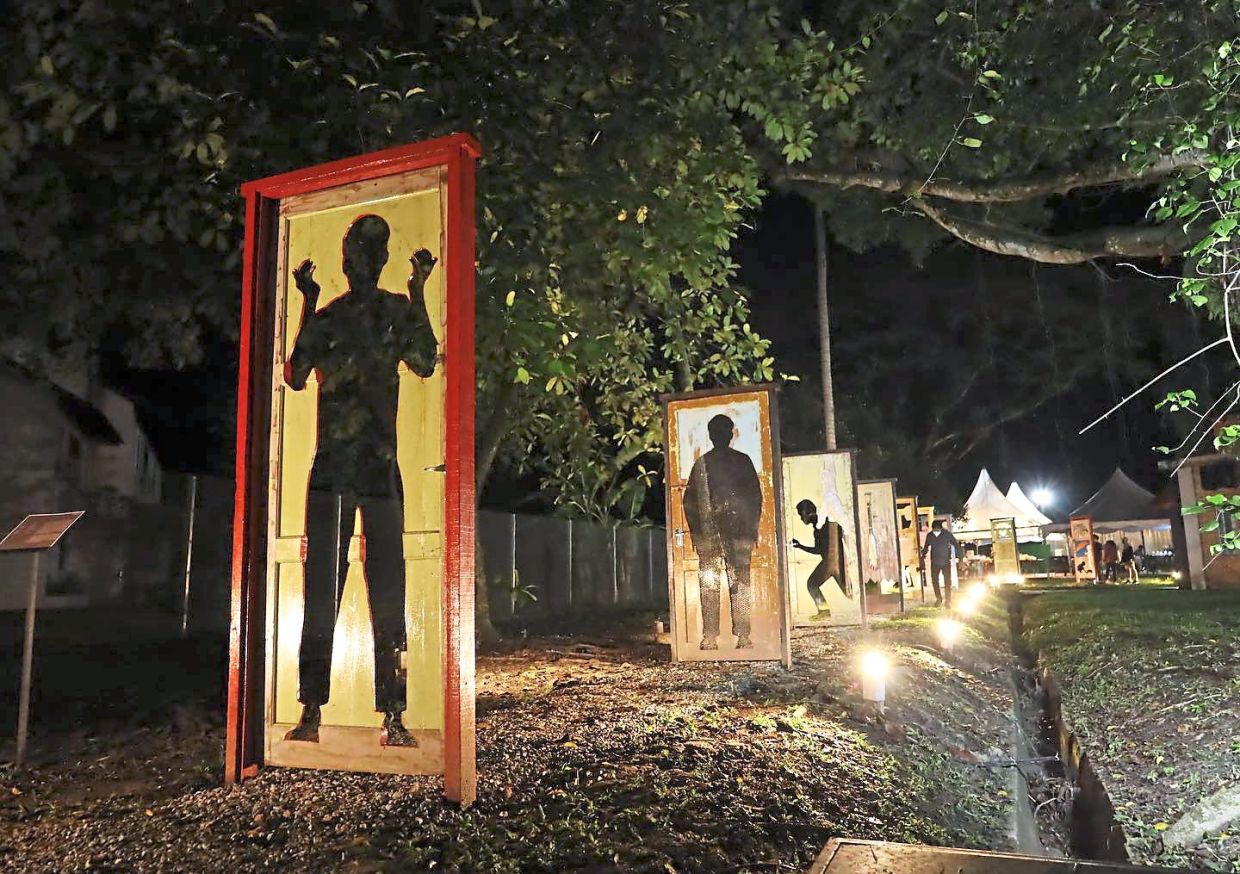 “Some people came back two or three times for the artist’s tour.”

Yee’s show is supposed to come to KL next year.

Elsewhere, Sharon Chin’s community art exhibit I Like This Place, held at a rented bungalow by a mangrove beach in Port Dickson, Negri Sembilan welcomed visitors from the area as well as from out of town.

“You may be concerned with wider publicity for the show and if you are hoping to sell works from an exhibition, you are maybe less likely to find buyers outside KL. But nowadays with social media and online awareness, an exhibition can be documented and publicised well beyond its physical locality,” says Yong.

The Penang State Museum and Art Gallery’s recent Langur exhibition also proved that a youthful curatorial team can draw national attention, while the Sabah Art Gallery’s homegrown diversity makes it an art destination not to be missed.

With the National Art Gallery in KL still shut, it’s heartening to see other institutions coming into their own.

During the pandemic, art exhibitions and events were cancelled en masse.

Perhaps such prolonged lockdowns helped create a conducive space for digital art and NFTs to thrive?

NFT stands for non-fungible token, a form of crypto asset which uses blockchain (a digital public ledger of transactions) to record ownership details and provide proof of authenticity.

All kinds of digital objects – images, videos, music, text and even tweets – can be turned into an NFT.

In contrast with many other digital creations, which are often infinite in supply, NFTs have unique identifying codes, which makes them one-of-a-kind. This means that its provenance can be traced, and tech-savvy Malaysian illustrators/artists started to realise its potential as an income stream during the pandemic. Red Hong Yi’s first NFT titled 'Doge To The Moon', from her Meme Banknotes Series, proved that Malaysian artists were not left behind in the NFT revolution. Photo: Annice Lyn

In the context of NFTs in the digital art world, this makes it possible to now truly own and sell digital works.

Touted to be the most expensive NFT sold by a Malaysian artist, this is the first work of six in her Memebank series.

“There’s been a lot of debate about NFTs and I’ve done a lot of research about it. NTFs are a certificate of authenticity – they show proof of ownership in a way that traditional art can’t. NFTs – or crypto – are replacing traditional systems in a more transparent, open and efficient way,” wrote Red Hong Yi on her social media in July.

Artist/illustrator Katun (Abdul Hafiz Abdul Rahman) kicked off his NFT journey just a month later, with two of his NFT collections sold for a total of over RM1.6mil in 24 hours.

At the Back Room KL, Artists of SEA presented its inaugural exhibition, 1000 Tiny Artworks, a showcase of small artworks.

“I love that the artists got to connect with each other, and that we got to spend time getting to know the buyers and share about the artists with them. I loved doing this exhibition in a more intimate way and we will likely be doing it as an annual thing in December,” says Red Hong Yi, who organised the show.

1000 Tiny Artworks was far from conventional. It featured an array of artistic talent, from regular artists to illustrators, designers, photographers, printmakers and musicians. One of the positives from the pandemic is that the Malaysian art scene has emerged as a more open space, with “gatekeeper galleries” now having to keep up with current trends and disruptors in art. 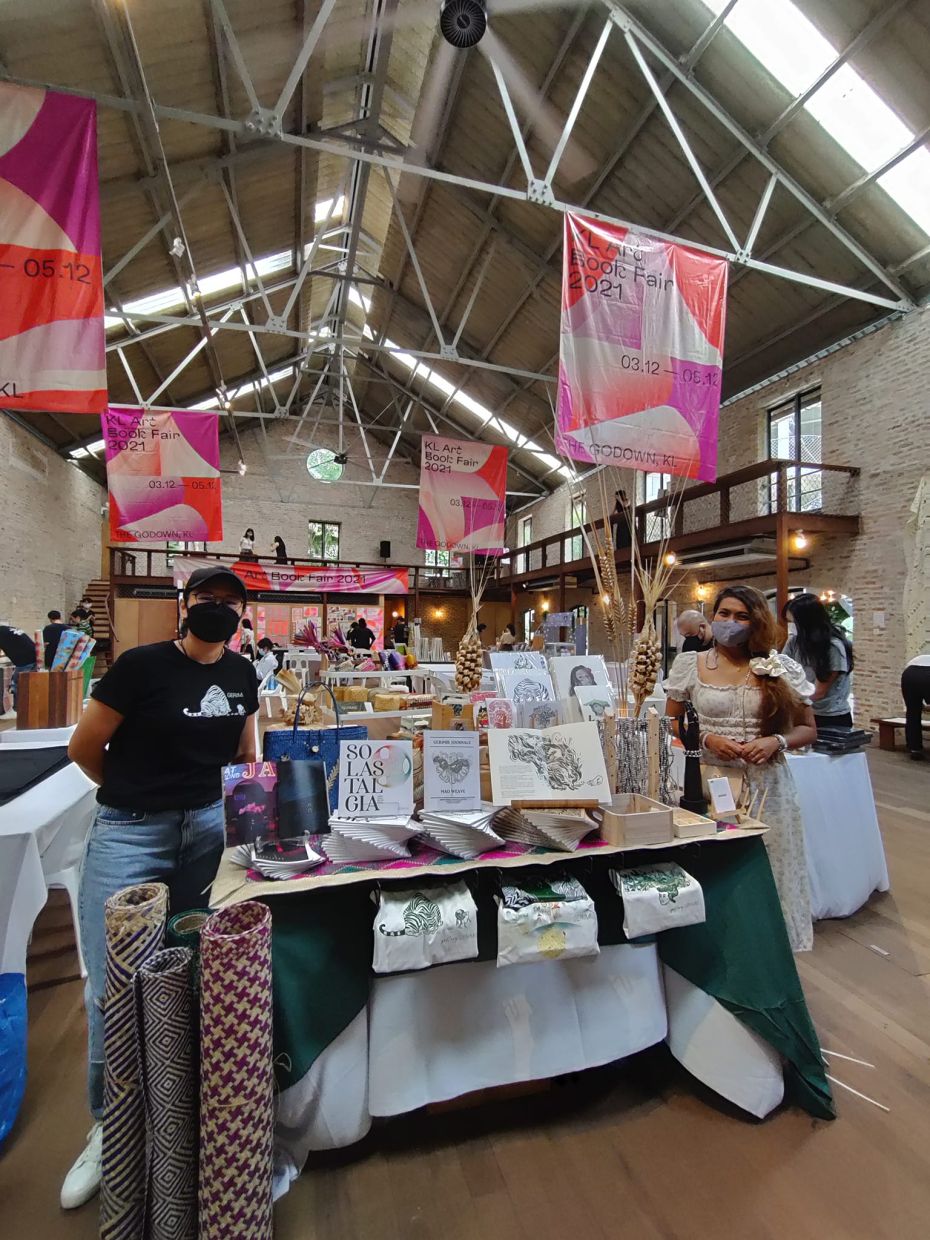 The ARTisFAIR event, which bypassed galleries, offered artists and the masses a new marketplace. Like all new and ambitious events, it had its teething problems and criticism (for hanging art on shopping mall balconies), but ARTisFAIR, as an “outsider event”, is a recent development to watch if it keeps strictly to its art retail focus and not art revolution mission.

The inaugural KL Art Book Fair in early December showed that despite its modest scale, a community of designers, illustrators and artists could pull off an event that looked good on Instagram while having substance and vision.

The printmaking boom during the pandemic, which made full use of the online market, has also introduced a new generation of creatives willing – or preferring – to operate outside the art gallery system.

In the middle of all the heightened art activity, Joshua Lim of A+ Works Of Art in KL reminds us about what truly matters. He draws our focus to a pertinent issue, that of art collecting.

“Pandemic or not, more art fairs or fewer, there is a problem with the culture of collecting in Malaysia. Collectors play a vital role in the larger art ecosystem but too often I have seen collectors who are more motivated to buy based on getting the ‘right’ price, which almost always means the lowest price,” he says.

Lim stresses that collecting should be motivated, first and foremost, by an interest in a relationship with the artwork and the artist’s practice.

“Perhaps what we need more of is a focus on developing a genuine culture of collecting that is about these values and not just price. This may mean that some of our best collectors could take a greater public role in educating their peers. We can have more discussions that might inspire younger collectors to embrace such values, more coverage of the substance of the arts, more art criticism, and not just reports of people’s opinions and the talk of the town,” he concludes.

Thousands of books destroyed at BookXcess warehouse in Shah Alam