An author known as the father of Chicano literature left behind a bilingual children’s book after his 2020 death, telling a story about Christmas in the American Southwest.

The tale from Rudolfo Anaya, who died from natural causes at 82, is being published posthumously for the holiday season by Museum of New Mexico Press with parallel text in Spanish and English. The story extends a cycle of Anaya's illustrated children’s books with a playful cast of animal characters, centred around a tiny, inquisitive owl named Ollie Tecolote.

The book was crafted by Anaya painstakingly in his waning year as an invitation to children to explore literature in English and Spanish, said Enrique Lamadrid, a publisher and retired chairman of the Spanish teaching department at the University of New Mexico. Lamadrid collaborated closely with Anaya in his final years to translate Owl In A Straw Hat series into Spanish.

"We crafted that really, really, really carefully so that kids would be comfortable," said Lamadrid, who first befriended Anaya in the 1970s. "You start with love. You have to fall in love with your second language in order to be any good with it at all.”

Anaya achieved lasting literary fame and influence with the novel Bless Me, Ultima in 1972 about a boy’s coming of age in post-World War II New Mexico under the guidance of a traditional spiritual healer. The book became a movie - and an opera. 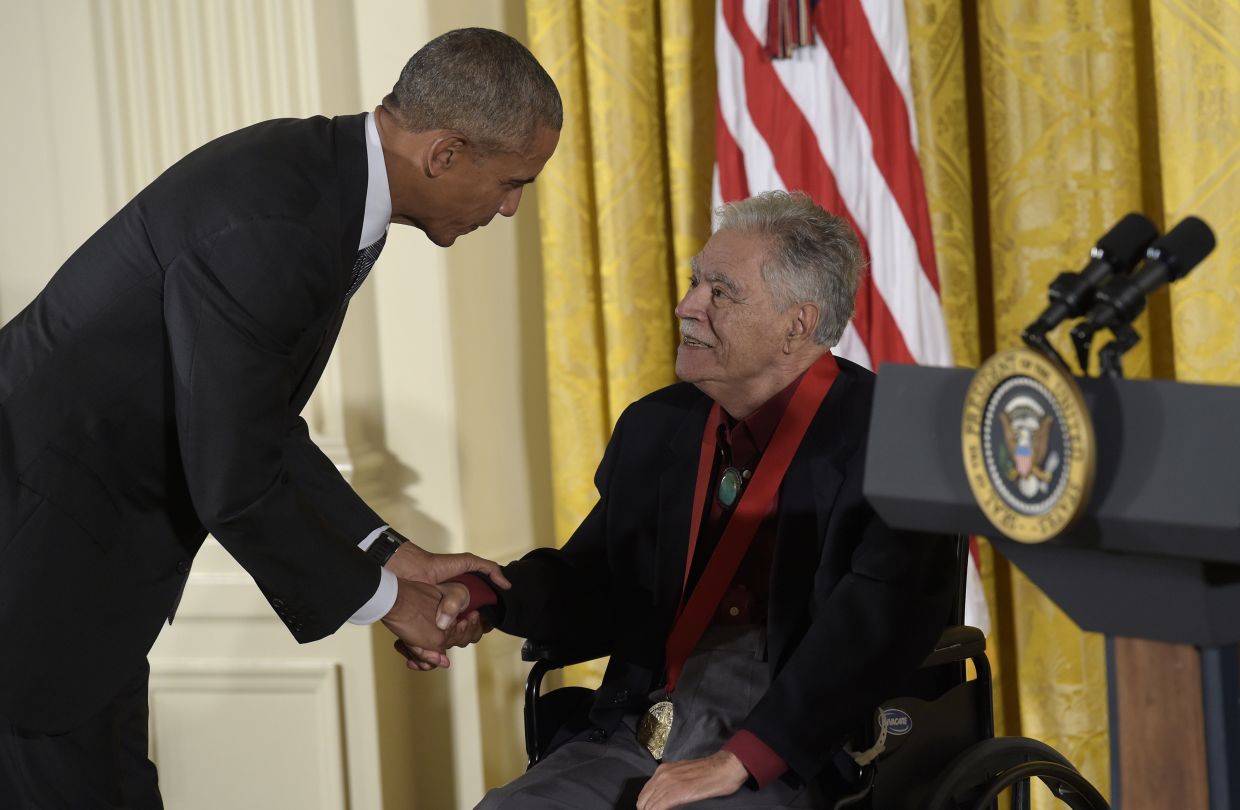 President Barack Obama shakes hands with author Rudolfo Anaya after presenting him with the 2015 National Humanities Medal during a ceremony in the East Room of the White House on Sept 22, 2016, in Washington. Photo: AP

Anaya wrote his New Mexico Christmas Story for children initially in English, sprinkling in a smattering of Spanish-language words and phrases about Hispanic holiday comfort food and traditional Christmas pranks performed by "abuelos."

Translated literally, "abuelos” means grandfathers or grandparents, while it's also used as slang for costumed family elders in northern New Mexico who traditionally go house-to-house at Christmastime to ask startled children whether they have been naughty or nice.

The book’s images are from painter and pop-culture muralist Moises Salcedo - who goes by El Moisés - and provide a splashy visual tour of winter holiday traditions in northern New Mexico, from handcrafted "farolito” candle lights to steaming "pozole” stew and an adventure that touches upon the three wise men. 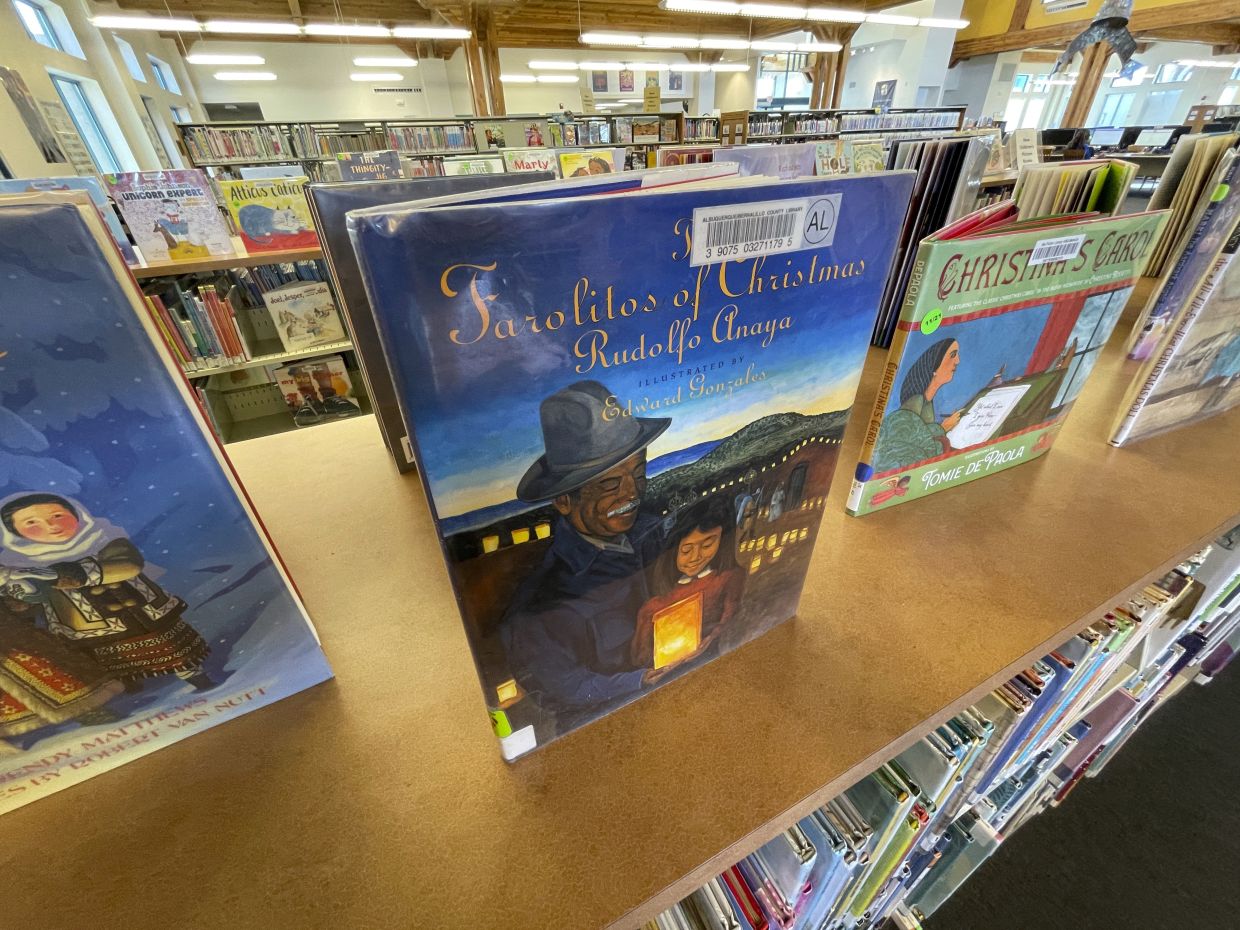 One of author Rudolfo Anaya's many books is displayed at a library named in his honor in Albuquerque, New Mexico. Photo: AP

Michelle Garcia, a preschool teacher for the city of Albuquerque, reads an earlier Owl In A Straw Hat book to her 4-and 5-year-old students, seated in a semicircle, allowing for comments and questions.

Hispanic traditions run deep in New Mexico, where Spanish settlers arrived in the 1598. Nearly half of the state's population claims Hispanic heritage, and some students in Garcia's class - but not all - recognise the Spanish words in Anaya's book. Garcia says a short English-Spanish glossary in the book helps her answer any questions.

"There's just a such a variety of wording, they can relate, especially if they're from Chicano descent or any kind of Spanish descent," said Garcia, who traces her Hispanic roots and comfort with Spanish expressions to grandparents in northern New Mexico and southernmost Colorado.

Garcia took a day off to meet Anaya shortly before his death, knowing that he would appear at the dedication of a public library in his name.

"He said he met his wife at the library,” said Garcia. "It was just this amazing story to encourage children to come to the library and to read and to open a book. It just encouraged me to tell those stories.” - AP