According to auction house Christie's, there are only about 10 copies of this 'Dune' storyboard. Photo: AFP

Dune was long said to be cursed on the big screen, until Denis Villeneuve's recent adaptation. Now, Christie's is hoping that the sci-fi saga will meet the same success at auction. In November, the auction house will offer a storyboard of Alejandro Jodorowsky's ill-fated adaptation of Dune.

This manuscript has become legendary among science fiction fans since producer Michel Seydoux asked Franco-Chilean director Alejandro Jodorowsky to adapt Frank Herbert's cult book in the early 1970s. It was a mammoth project that was to bring together Salvador Dalí, Mick Jagger, Orson Wells, David Carradine and Alain Delon on the cast.

After four years of work, Jodorowsky and Seydoux left for Hollywood with a huge colour storyboard in the hope of raising the missing US$5mil (RM21mil) required to make up their budget. MGM, Paramount and others all declined the proposal. So while Jodorowsky's ambitious project never saw the light of day, it nevertheless entered the realms of cinema legend as an "impossible" movie.

The storyboard on sale at Christie's is one of the few manuscripts providing a glimpse into what was billed as "the greatest SF film of all time."

The dense tome includes reproductions of many of the thousands of drawings made by Moebius, co-creator of the comics anthology Métal Hurlant, British illustrator Chris Foss and Swiss artist HR Giger, as well as a near-complete breakdown of the film. Some of these sketches can be seen in Frank Pavich's multi-award-winning documentary Jodorowsky's Dune.

It's an unmissable event for movie fans, according to Vincent Belloy, the specialist in charge of the sale.

"The sale of one of these surviving copies is a major event and an extraordinary opportunity for collectors and fans to acquire a legendary document in the history of cinema," he said in a statement.

This storyboard will be on public display in the Paris galleries of Christie's from Nov 18-22. - AFP 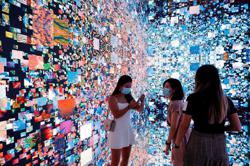