With the arrival of Direktori Kartunis Perak, a mapping and book project focusing on Perak-born cartoonists, you have to say the Silver State is serious about documenting its funniest creative people.

Each entry contains an artist biography and a list of selected works. The legendary Batu Gajah-born Datuk Lat is the most recognisable cartoonist in the book, and the Perak state government is also planning to open Rumah Lat Dan Galeri (on the outskirts of Ipoh) later this year. This project has been delayed for more than year because of the pandemic.

Juragan and Tarzidi, popular names in the Bahasa Malaysia comics scene, were also instrumental in setting up the Rumah Kartun dan Komik Malaysia (Malaysia Cartoon And Comic House) in Kuala Lumpur in 2017.

The Lenggong-born Don is another legendary cartoonist with a career stretching back to more than 40 years. On the contemporary front, indie cartoonist Arif Rafhan had his graphic novel Reality Bitchslap released by Singapore-based regional publisher Epigram last year.

"The idea for this book was mooted during the Perak Cartoon Fest 2019 (PECAF). Back then, we didn't have a database on cartoonists. So we worked to change that, researching and drawing up a list of cartoonists from Perak," says Nur Hanim Khairuddin, PORT general manager.

"This project was also delayed by the pandemic last year. We then appointed Mior Azhar and Abu Huzaifah from Sako+ collective to help meet up with some of the senior cartoonists (mostly based in KL), and to get their stories and career details," she adds.

This project to identify and document the pool of cartoonist talent in the state is the first of its kind in Perak. It is also a part of a broader plan to create a resource hub in Ipoh dedicated to pop culture, music and the arts. 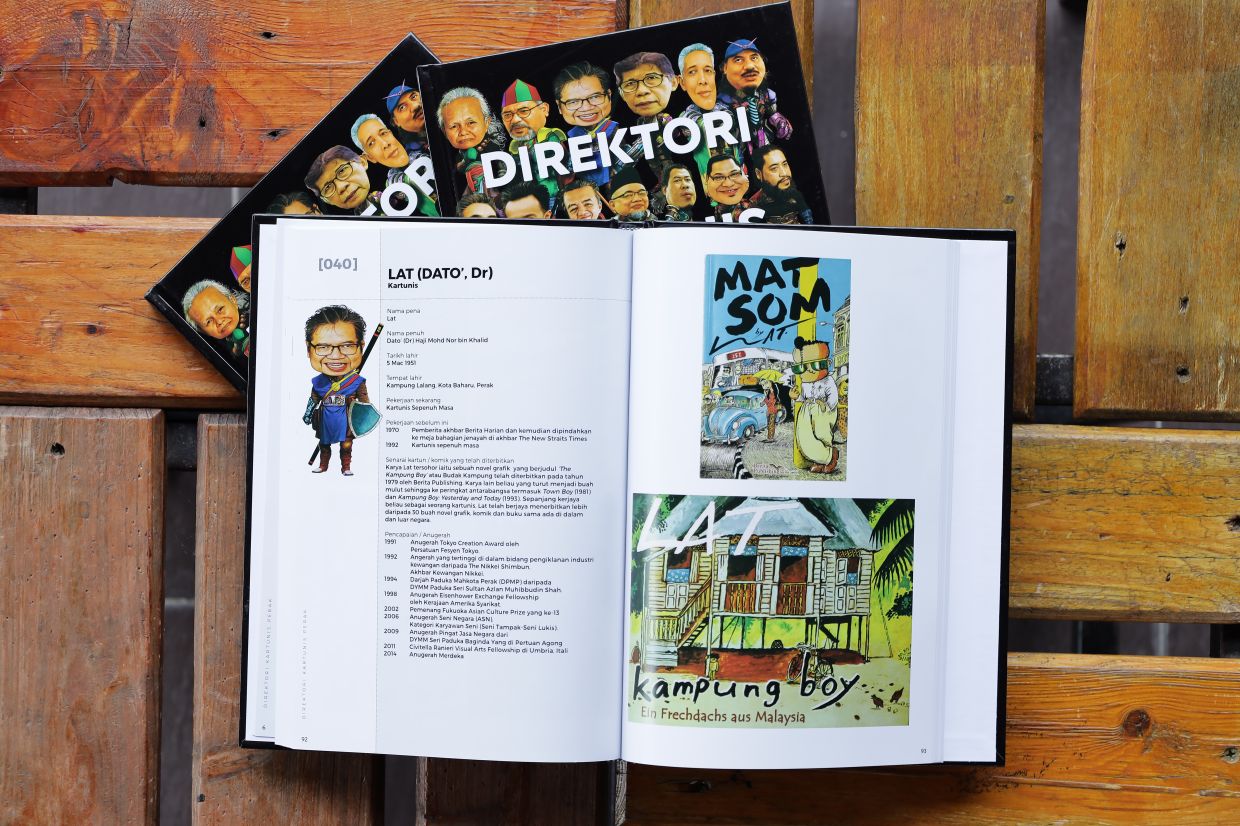 Each entry in the book contains an artist biography and a list of selected works. Photo: PORT

"The first step is always important... to locate the cartoonists. For the documentation part, we narrowed down the list to 65 cartoonists, but of course, the actual numbers are higher.

"Initially we targeted 100 (cartoonists), and we will continue documenting more artists from Perak. This mapping project will be expanded. It is important, considering the influence and vast careers that some of these cartoonists have," she explains.

There is no confirmation yet if the Perak Cartoon Fest will have an on-site event this year, but research activities and virtual forums/workshops relating to comic book culture are being finalised, reveals Hanim.

Despite the national lockdown, Hanim also adds that the groundwork for the Arkib Seni Kreatif Perak (Perak Creative Art Archive, a tentative project name) is slowly taking shape. It will include PORT's archival work on the cartoonists.

"We are now working on Datuk Lat's archive to prepare it for his soon-to-be-launched gallery (Rumah Lat Dan Galeri, near Ipoh)," says Hanim.

"With the pandemic restrictions, it's impossible to plan ahead. But on the sidelines, we will carry on with our work. We have a team of researchers, volunteers and academics interested in giving cartoonists and comic book culture in Malaysia a platform to exhibit, to tell their stories and to document the history behind the (cartoon) panels. A lot more can be done to give this community a voice in the national arts and culture narrative," she adds.