Relax, read and enjoy nature at this community library in Kuala Lumpur City folks can now relax and read books for free while enjoying the beauty of nature at the Malaysian Librarians Association (PPM) outpost in Kebun Bandar located in Sungai Bunus in Kuala Lumpur.

"In the past, the river was a place of activities or business. However, due to development, people started moving away from the river and some polluted the river.

"With the efforts of the Kuala Lumpur City Hall (DBKL) to beautify the River of Life (RoL) area, this is the time to breathe new life into the environment with beneficial activities that can encourage more people to come," said Sheikh Faisal, who launched the Kebun Bandar PPM and Little Free Library (LFL) in Kebun Bandar Sungai Bunus recently.

He added with the two ventures (Kebun Bandar PPM and LFL) underlined the objectives of the Local Agenda 21 Kuala Lumpur (LA21 KL) Neighbourhood Garden project in working with communities along the banks of the river in Kuala Lumpur and to develop the area as an agricultural and recreational site.

Among the facilities provided at the Kebun Bandar PPM are chairs and tables as well as a gazebo. The garden features plants such as roselle, lime, chilli, Brazilian spinach, galangal, okra, kesum leaves and cat whiskers plant.

LFL is a "dollhouse-sized library" programme started in 2009 by Todd Bol of Hudson, Wisconsin and Rick Brooks, a coach from the University of Wisconsin-Madison, United States of America to cultivate the reading habit.

"In Malaysia, the first LFL was set up at Nilai Impian in December 2014 by the chief librarian of Universiti Sains Islam Malaysia (USIM) Nor Azzah Momin. The movement in Malaysia also attracted the interest of many individuals and government and private organisations throughout the country. Kebun Bandar PPM will be recorded on the world map, ” he said.

LFL has a unique and simple concept: individuals can take a book, leave a book (contribution), no return date, no late return penalty, no library membership card is required, and is open 24 hours every day of the week.

"This initiative is meant to promote reading culture and to produce a knowledgeable and informed society, ” he said. - Bernama

Book lovers rejoice! The National Library in Kuala Lumpur to reopen on Dec 23

The National Library does not understand its customers 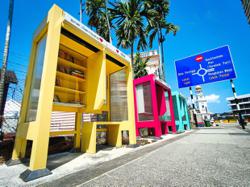