‘Most of the pieces depict a little girl who I relate to as myself, and she is either falling, finding or wandering in search of meaning or peace amidst the turmoil in her head,’ says Boudville about debut solo exhibition. Photo: Kimberley Boudville

Kimberley Boudville’s first solo exhibition is a poignant tribute to her father who died from cancer late last year. The collection of work featured in My Journey at Artemis Art in Kuala Lumpur revisits her difficult year.

But although it is tinged with sadness, ultimately, the story she tells is also one of hope and acceptance, and hints at her resolve in staying strong in the face of adversity.

Boudville, 21, shares that the loss of her father was something she found very hard to come to terms with.

“We had a very close father-daughter bond and we shared many similar interests in topics of science, technology, the universe, art and nature. It was a difficult time, the grief was very profound and the loss was very hard to accept as I was just starting out in life. I had dreams and plans of sharing life’s adventures with my dad and mum. So his untimely passing dealt a very hard blow to the both of us, ” says Boudville.

Art has always been her channel of expression when coping with deep emotional issues ever since she was a child.

This time, the process of pouring all her grief and emotions into this collection of works proved to be healing in a way that she never expected.

“I want to believe that this process has matured and emboldened me to be able to face whatever lies ahead. Being able to put all my thoughts and feelings of sadness and loss into my artworks helped me to accept and overcome the loss in a way that is hard to describe, ” she reflects.

But that is not to say that it was a walk in the park.

In her Stages Of Grief ink series, she captures the denial, anger, depression, isolation and self-bargaining that she went through, before acceptance and healing gradually became a possibility.

Not unlike going through the different stages of grief, putting this collection of work together for her debut solo show was also a process that had its ups and downs.

“There were many painful and difficult moments while I was executing some of the pieces of work in this collection. Sometimes the memories of my dad became overwhelming and I would be stuck in a moment of numbness and limbo, staring off into space and reminiscing of the time spent with him, ” she shares.

The most defining moment of this journey was when she completed the series of drawings Thank You For Watching Over Me and Enjoy The Journey. This was her way of telling her father to be happy wherever his journey takes him.

“This was when I finally accepted the loss of my dad and that he would never be coming back. I think I found peace at a point of time that I had least expected to. And in a very unconventional way, ” she says.

Boudville has a diploma in fine arts from a local art college, and is currently pursuing her bachelor’s degree in fine art practice at Nanyang Academy of Fine Arts in Singapore.

In finding solace during this difficult time, she also draws on conversations she used to have with her father on topics such as alternate universes.

“Dad had always believed in the existence of a parallel universe and we have had discussions and debates about this theory. He said that a person never really dies... they just go into another dimension or float around in the vast universe. I have used this concept in some of my works to depict those thoughts, especially so in the series Goodbye Daddy. Most of the pieces depict a little girl who I relate to as myself, and she is either falling, finding or wandering in search of meaning or peace amid the turmoil in her head, ” she says.

Boudville relates how her dad had always been a big fan of her work. He would keep snapshots of his drawings and sketches on his phone and proudly show it to his friends before she could even finish painting some of them.

“When I was a kid, I used to give him little pieces of notes and cards with sketches and drawings and he would be so thrilled to receive them. I think my dad would be very emotional about my first solo. I hope he would be proud of how far I have come and watch over me as I enter the next chapter of my life, ” she says.

Boudville muses that it has been said that a debut solo is the one most important event in an artist’s career, and she is proud to dedicate her first solo in memory of her late father.

“A fitting tribute for a man who has loved, encouraged and supported my dreams and ambition, ” she adds.

On a personal front, she has recently been involved with Kembara Kitchen, after encouragement from her mother. During the movement control order period, she helped deliver meals to frontliners and cancer-stricken children at the Ronald McDonald House (RMH) and hopes that there will be an opportunity in the future to spend time with them and teach them art.

Part of the sale proceeds from the artworks in Boudville’s solo exhibition will be channeled to the RMH. 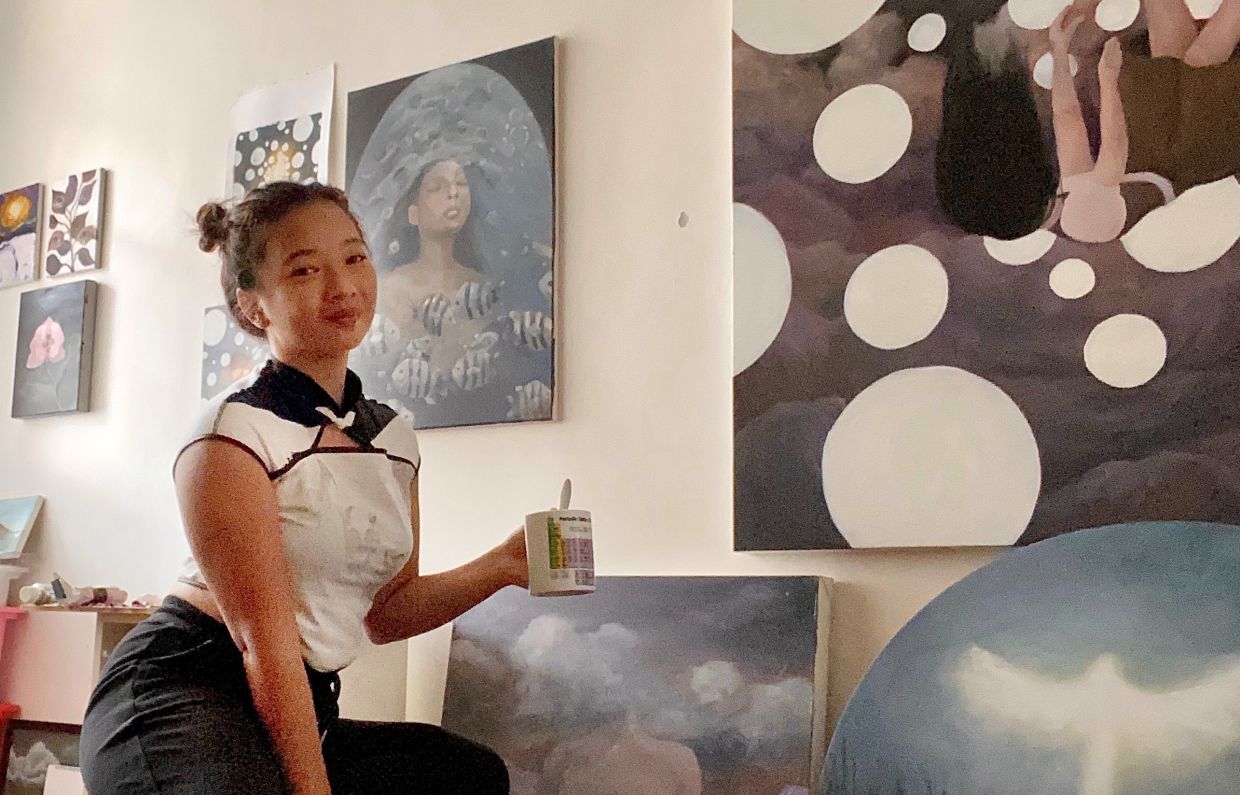 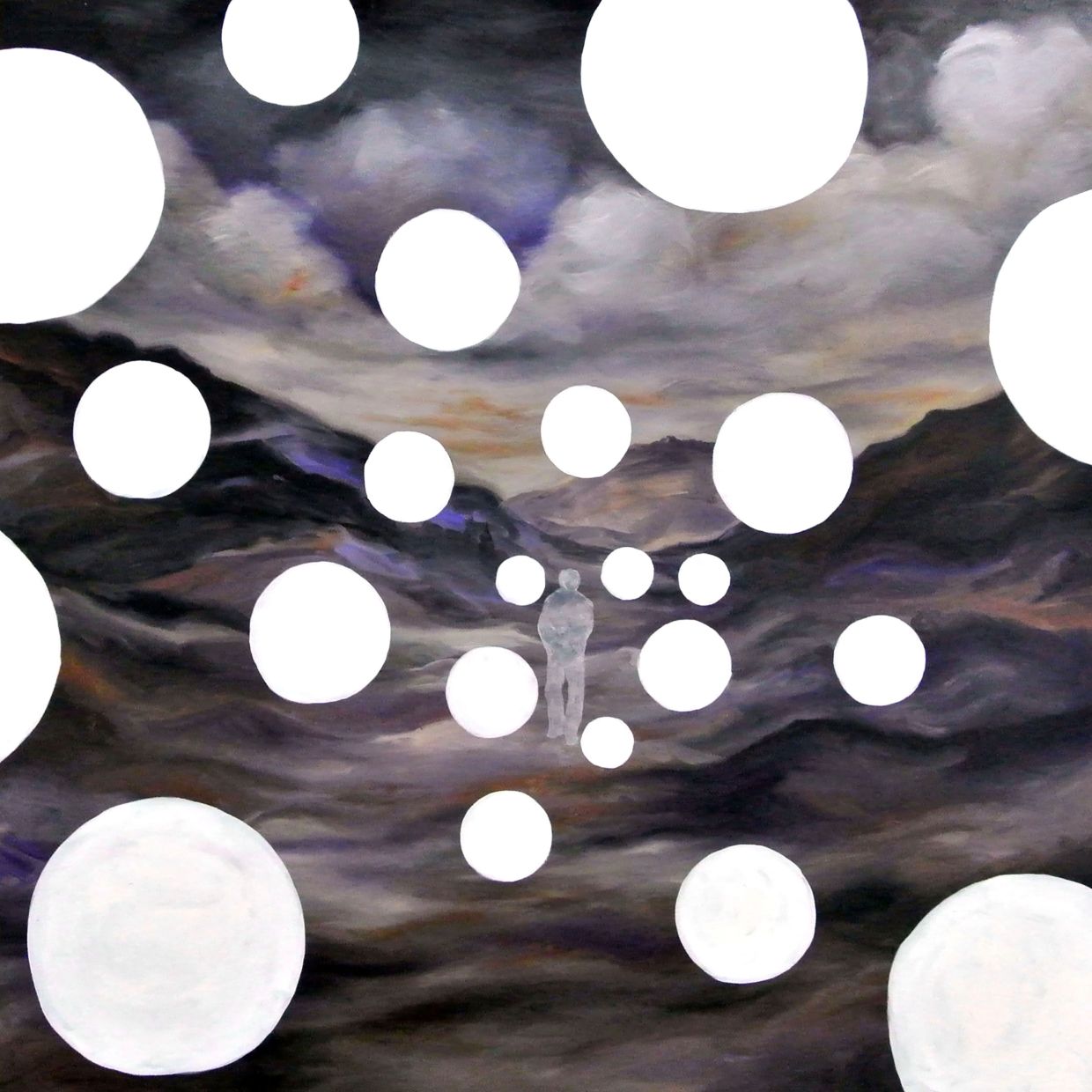 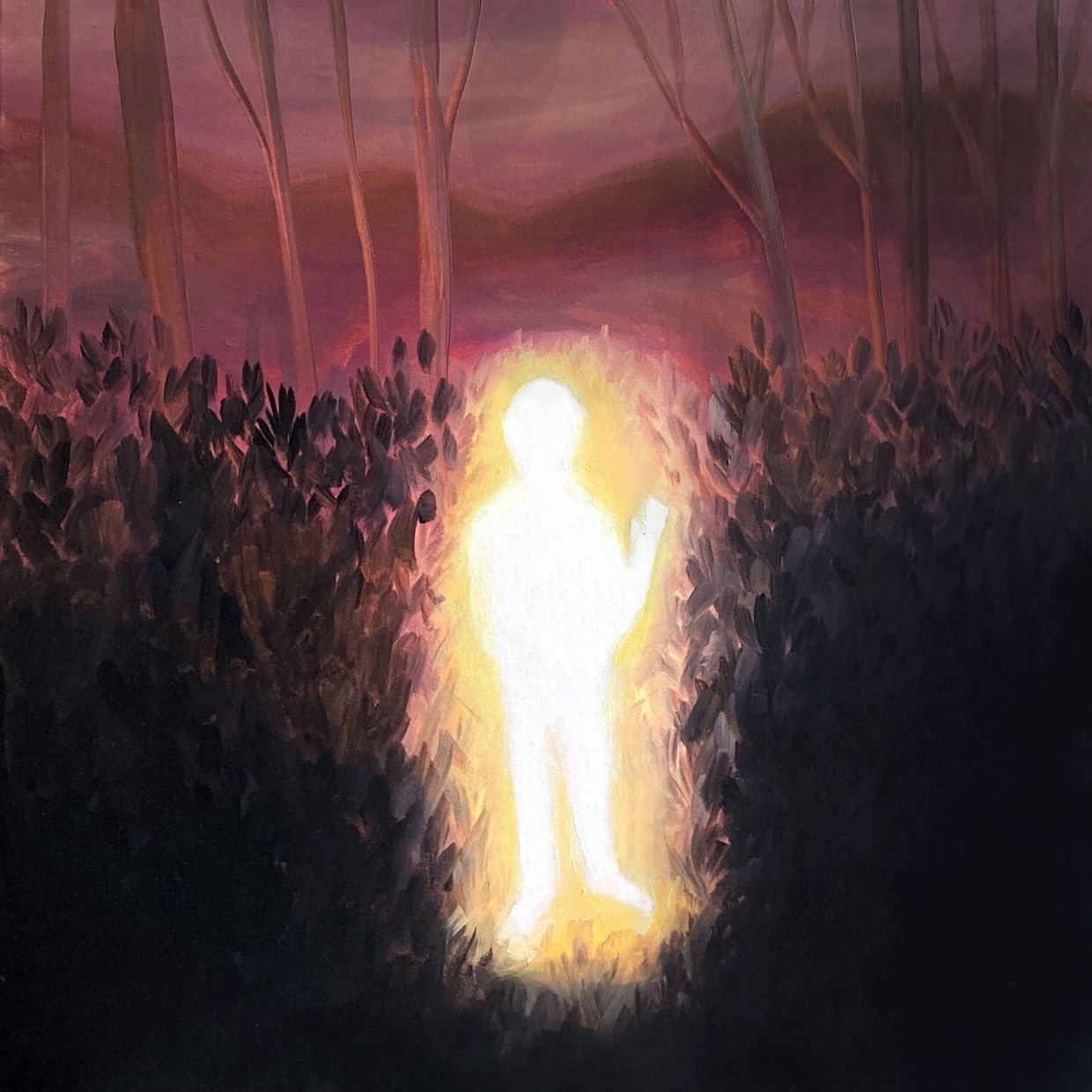 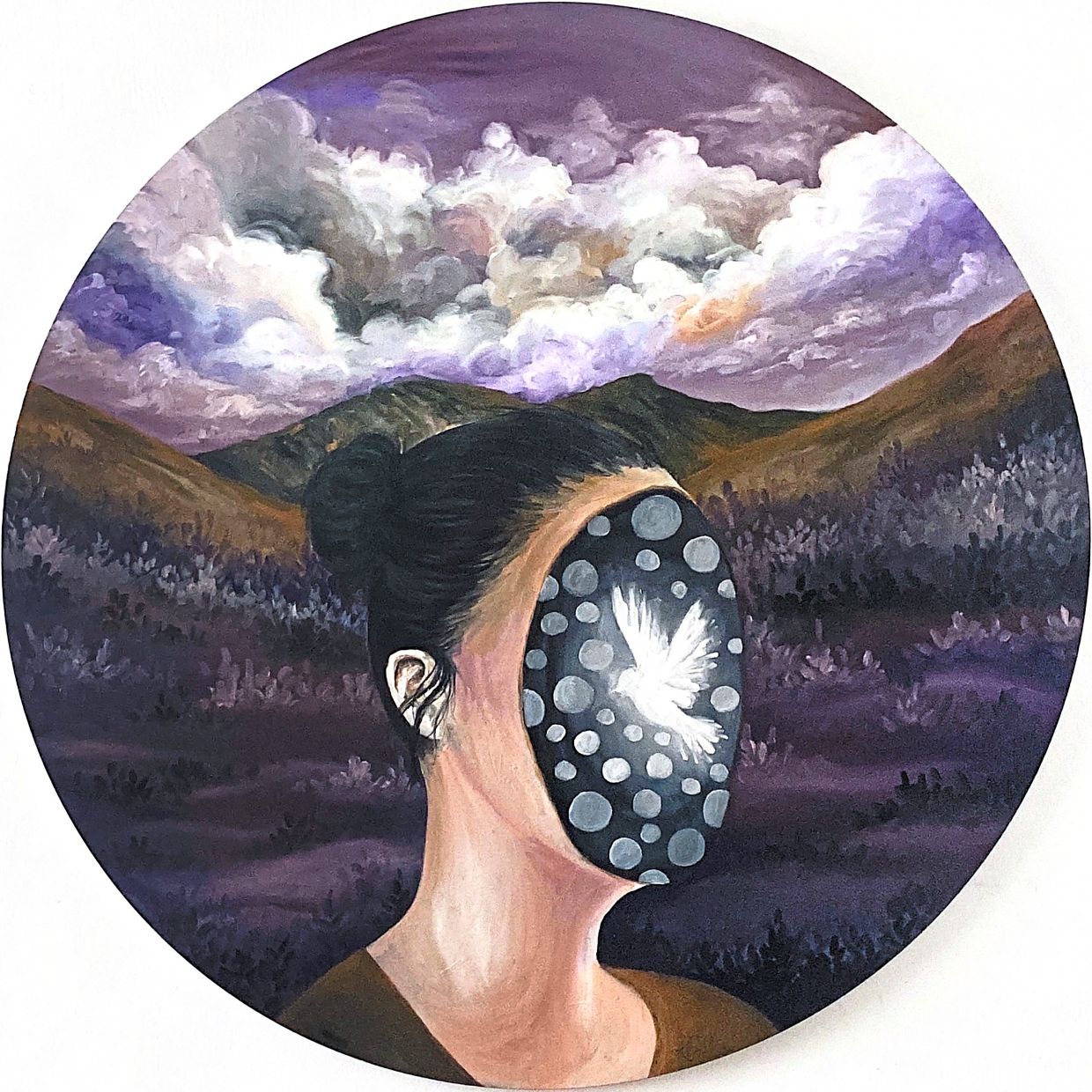 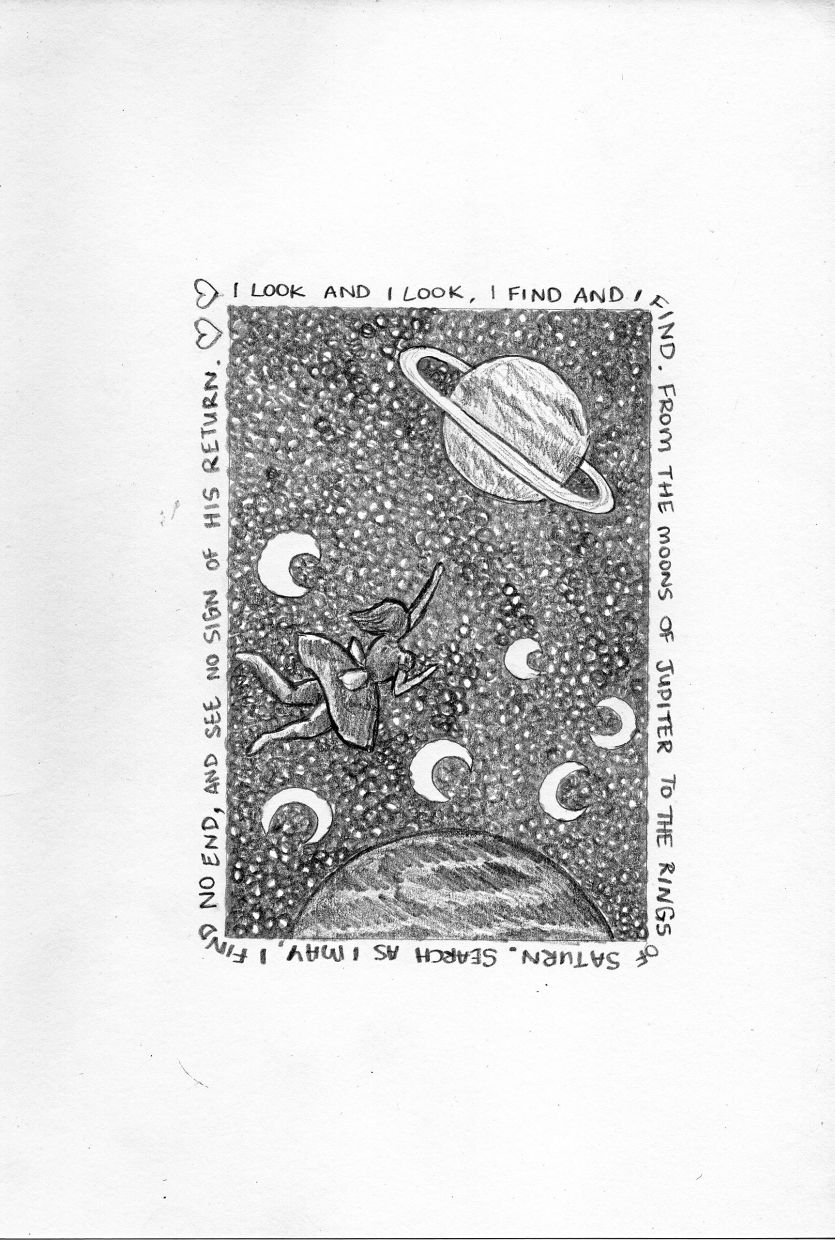 ‘Most of the pieces depict a little girl who I relate to as myself, and she is either falling, finding or wandering in search of meaning or peace amidst the turmoil in her head,’ says Boudville about debut solo exhibition. Photo: Kimberley Boudville 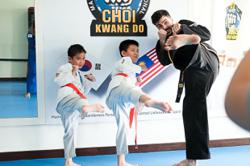