A woodcut banner (left) titled 'You Purchase Us As Labour, But We Are Human Beings' created by Taiwan's Print And Carve Department together with the migrant workers from Taiwan International Workers Association is seen on the balcony of the Zhongshan building in Kuala Lumpur. Photo: The Star/Muhamad Shahril Rosli

A series of woodcut posters which were hung up on street corners, draped on bridges and pinned unto traffic lights across Indonesian cities during the country’s general election last year has made its way to a group exhibition held at the Back Room KL gallery.

The DIY canvas posters were created by the artists from the Jogjakarta-based Taring Padi collective, which organised an outreach campaign named Terompet Rakyat in early 2019 to urge people to vote wisely in the Indonesian elections.

Through these Indonesian works – circling topics such as fake news, race, religion, corruption, human rights and environmental issues – viewers can grasp how art-based activism, especially through the medium of woodcut, is significant today.

The show, which is gallery-based and outdoors, includes 11 artists and six collectives hailing from Malaysia, Indonesia, East Timor, Hong Kong, Taiwan and Japan.

From A4 size paper to sizeable canvas banners, the social realism elements in each work are distinct. It is the unifying thread that binds these artists together despite their different backgrounds.

“I started to research self-organised artist collectives and the medium of woodcut about two to three years ago. I got in touch with these individual artists and collectives based in different parts of Asia through field trips, interviews and joining their workshops, ” says Krystie Ng, the show’s independent curator and one of the researchers behind the regional art zine entitled Mapping On The Development Of Woodblock Printing Collectives In Inter-Asian Context. Ng, curator/researcher of the 'Carving Reality' show, looks through the exhibits at the Back Room KL gallery. Behind her are some of Taring Padi's 'Terompet Rakyat' posters. Photo: The Star/Muhamad Shahril Rosli

“There are a few reasons for me to put up this exhibition. Firstly, printmaking is underrepresented here, and social realist woodcuts are not common in Malaysia, considering we do not have revolutions in our history like other Asian countries.

“This ‘alternative network’ connected via woodcuts also shows that people in different parts of Asia are actually facing the same issues. So by including prints from various places, we can see what we have in common, as well as the influences between these artists and collectives, ” she adds about this ongoing research project.

In many ways, Carving Reality is a very self-explanatory exhibit title. At this show, the visual language to communicate the importance of an issue - be it societal, political or economic systems - can be understood immediately whether you spoke Chinese or Bahasa Indonesia.

“I think most people see the exhibition as ‘self-explanatory’, not only the title, the prints are all very strong in visual, at the same time giving very direct messages to the audience. As you can see, many of the works selected in this exhibition are related to some ongoing social issues in different localities, corruption, logging, human rights, historical events, feminism, etc, ” says Ng.

If you look beyond the art processes, many of the artists and collectives here also take part in the social movements, or they take the chance to respond to the issues surrounding them. Is it possible to separate the printmaker from the activist, and vice versa?

“A lot of the members from these participating collectives are working as a journalist, social worker, anarchist who runs an infoshop, academic researcher, etc. So to me, these people are working on social issues not only when they create woodcut, but also in their day jobs as well as everyday life. For instance, the Rice Riot by A3BC is a note to celebrate women’s participation in fighting against the rise of rice prices in Japan, and Play The Non-Citizen Cards by Print And Carve Department is to raise awareness on non-citizens (mainly migrant workers and international students) living in Taiwanese society, ” elaborates Ng. 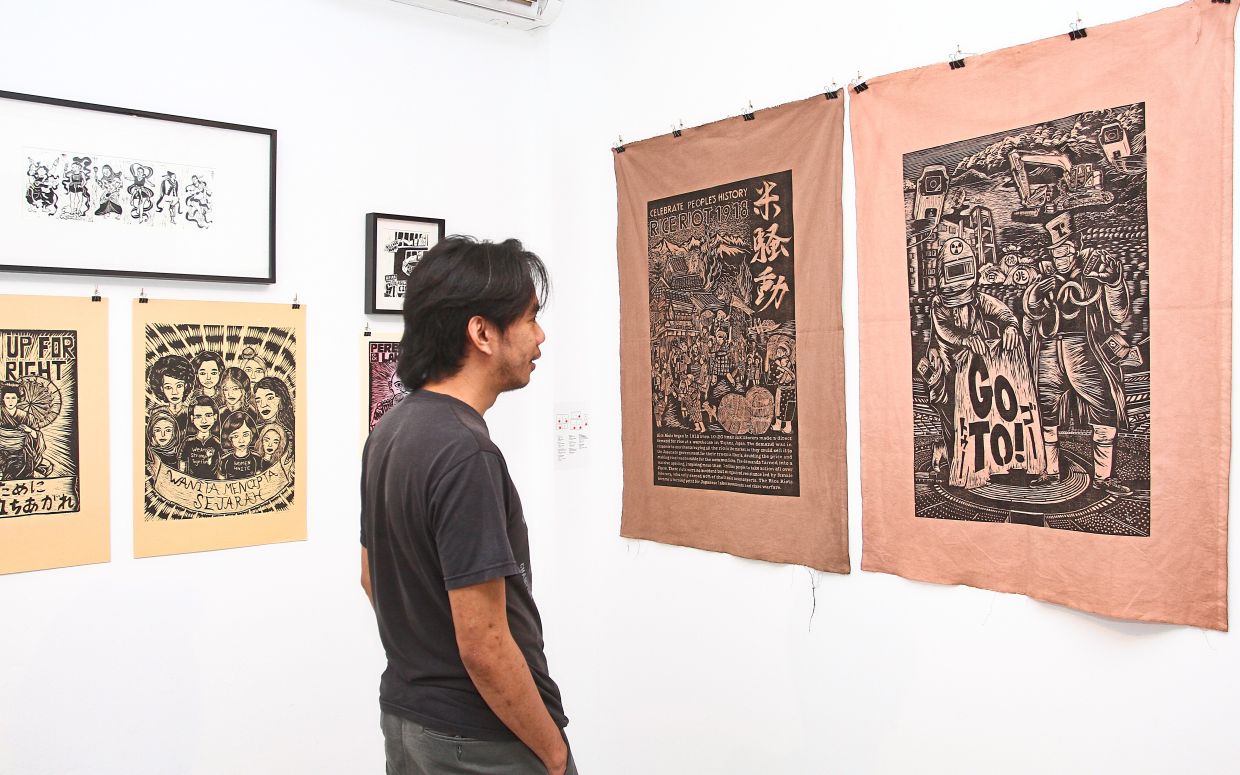 A visitor views woodcut prints from Tokyo-based collective A3BC at the 'Carving Reality' exhibition at the Back Room KL gallery. Photo: The Star/Muhamad Shahril Rosli

“Each print has a story behind it. For instance, Scream For Wuhan City (Print And Carve Department), Did I Miss Something? (HK’s Li Ning Fung) and Perut Tak Bisa 'Dilockdown (Bali’s Gilang Propagila) were are created in response to the pandemic.

“No One Is Illegal: Solidarity With All Detainees Of The World (HK’s Printhow) is to show solidarity to the detainees in Castle Peak Bay Immigration Centre (CIC) in Hong Kong. Some of the detainees went on a hunger-strike, protesting against inhuman detention. This case might not have caught our attention, but via woodcut the story is being told again, ” says Ng.

“As for Taring Padi and Pangrok Sulap, their works can easily catch the eye because of their size and of course, the visuals. Terompet Rakyat was created in response to the ongoing socio-political situation in Indonesia. In ParLIARment, the work cannot be more satirical to describe what has happened to our politicians over the past year. Both works are very recent. I think it is also interesting to observe how the situations they portrayed progress next.”

A common feature of these woodcuts is that they provide a medium for artists to engage directly with the masses, especially with precarious groups in the lower stratas of society, such as farmers, labourers, migrant workers, the homeless, and sexual minorities.

Most of the basic material used by the artists in this show are also tied to printmaking's long history, where resources - for some communities - might be limited.

“Based on my conversations with the practitioners, material such as woodcut, cloth and paper can be easily obtained. And they are very cheap as well. And to create woodcuts, the skill requirements are lower than say watercolour or oil painting. So it naturally becomes an ideal choice if you want the people to engage with, ” explains Ng.

“To be honest, not all of the exhibiting works were created by professional artists or full-time artists. A lot of them have no idea about contemporary art, they are not trained in fine arts and have not exhibited in a gallery. So they just worked with what they had access to.”

This exhibition is supported by the Cultural Economy Development Agency (Cendana).

Carving Reality is on at the Back Room KL, Zhongshan Building, off Jalan Kampung Attap in KL till Dec 6. Tuesday to Friday: by appointment only. Saturday and Sunday: noon to 6pm. Call 016-660 2585. Download the exhibit's publication here.