A woman walks by the closed English and American literature Shakespeare bookstore in Paris. Photo: AP

First, bookstores across literature-obsessed France were ordered to close in a new lockdown seeking to curb an alarming rise in coronavirus cases.

A few days later, bibliophiles were dealt a further blow as the government banned supermarkets, too, from selling books in a bid to parry claims of unfair competition.

"I think the decision to close the bookshelves in supermarkets is stupid. It robs people in lockdown of culture," said Sylvie Lagrange, an avid reader who visited her library in the southern suburbs of Paris to "stock up" two days before the start of a long month of lockdown due to last until end-November.

She was not alone: card carriers flocked to public libraries last week before they too were closed - some 8,000 books were taken out in a just a few hours on Thursday at the library in Villeneuve d'Ascq, just outside Lille along the border with Belgium.

"We lent out 8,000 per week" before the latest lockdown, said the library's director Helene Brochard.

France has some of the highest book readership figures in the world, studies show, and one of the densest networks of bookstores.

The SLF union of French bookstores says the country has some 3,300 outlets - one for every 20,300 people.

Unlike many of its neighbours such as Belgium that have issued their own stay-at-home orders, France decreed bookshops among "non-essential" businesses under the latest lockdown rules.

Also closed are hairdressers and barbers, toy stores, perfumeries, florists, cinemas and malls - even as many clothing stores, speciality food retailers, electronics specialists and others were allowed to remain open.

But it was access to books that mobilised protests in a country with some 16,000 public libraries as well as numerous prizes for authors and television programmes dedicated to literary musings. 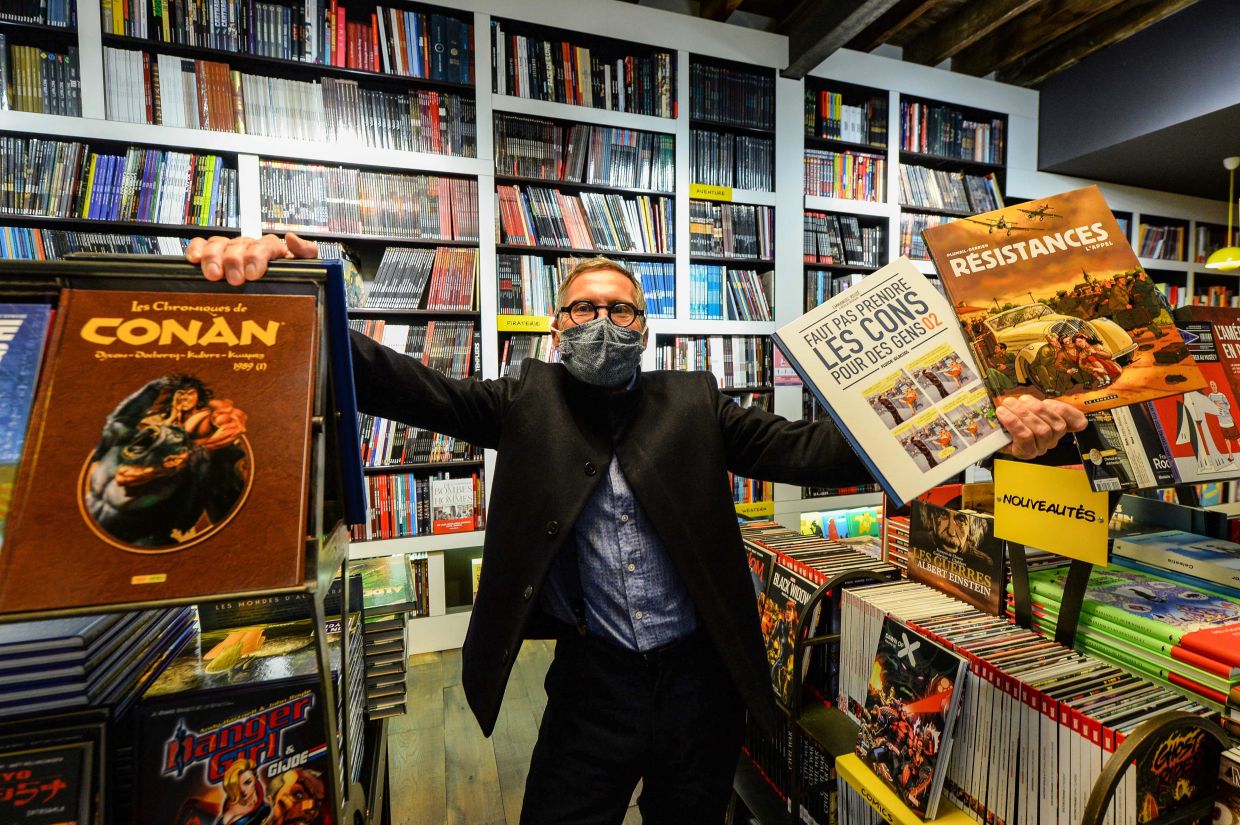 Samuel Chauveau, manager of the independent bookstore Bulle which specialises in comics, poses with books titled 'Do Not Take People For Idiots' and 'Resistances' in Le Mans, western France. Photo: AFP

"Politicians boast a great deal about the idea that France is a nation of readers and bookstores ... but just like that, we realise this was all hot air," said acclaimed author Sylvain Tesson of the government's decision.

Since the lockdown entered into force last Friday, anger has grown, with a petition to President Emmanuel Macron which had garnered more than 188,000 signatures by Wednesday.

There are also mutterings about flouting the ban, and growing calls to boycott Amazon, which now threatens to reap the lion's share of book purchases.

The announcement of literary prizes, including the prestigious Prix Goncourt, was postponed by organisers until bookstores reopen.

Under pressure, the government relented, but not in the way expected.

On Sunday, just days after the initial announcement, Prime Minister Jean Castex said that instead of allowing bookstores to reopen, the government would ban supermarkets, too, from selling books.

Culture Minister Roselyne Bachelot announced Monday that postage would be reduced for bookshops to mail orders to readers in a bid to prevent large e-commerce companies taking over the field.

But the measures did little to appease bookstore owners who already saw their turnover plummet by some 95% in France's first lockdown, from March to May this year.

Outrage spread even to the political class, with mayors launching a campaign for the reopening of bookstores and Anne Hidalgo of Paris accusing the government of making a "sacrifice" of culture and urging readers: "Don't buy on Amazon." 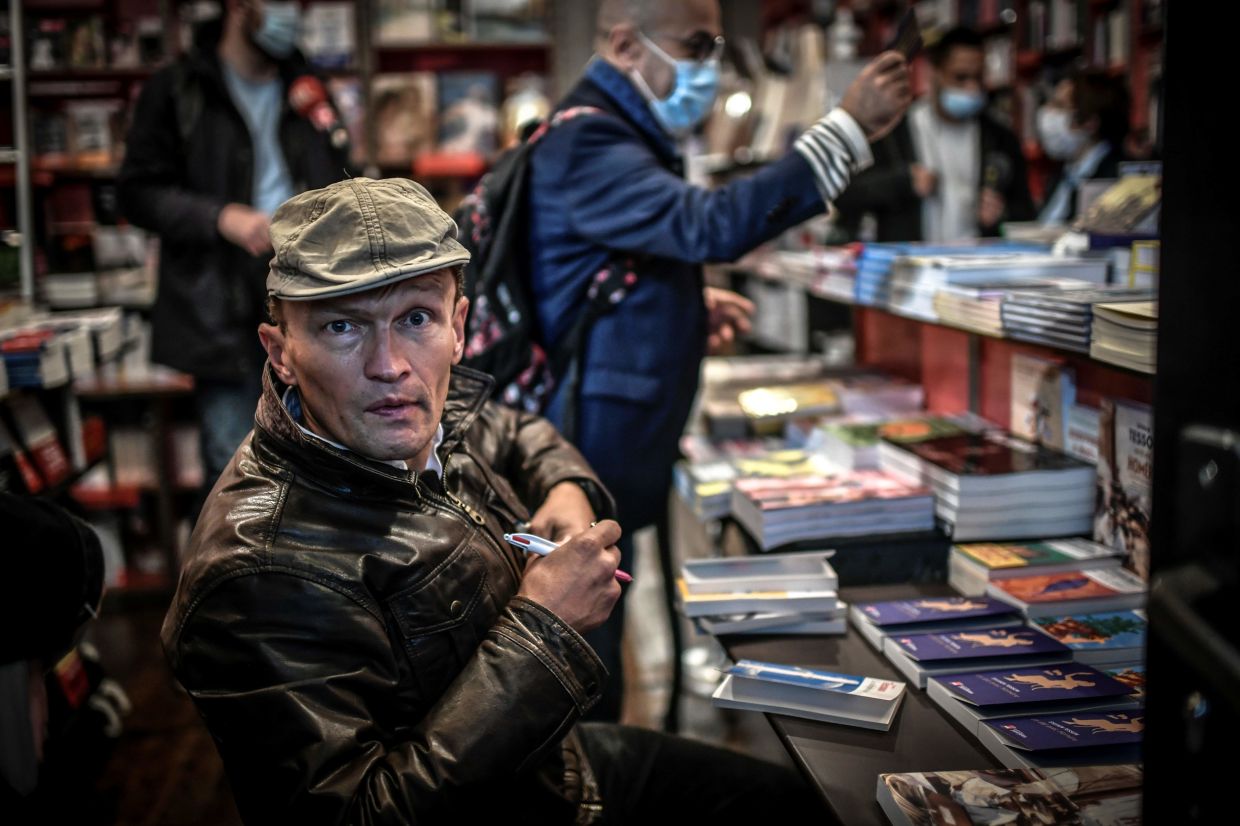 French writer Sylvain Tesson poses inside the Librairie des Abbesses bookstore as he signs one of his books during the launch of 'Rallumez les feux de nos librairies' (Turn back our bookstores' lights) event on Nov 2 in Paris. Photo: AFP

For its part, the SLF urged Macron in a statement to remember "that the book is a product unlike any other: it is a good that must be protected by the nation, under all circumstances."

"Bookstores play a unique role in ... transmitting culture and knowledge," it continued. "They are also one of the most effective ramparts against ignorance and intolerance."

Brochard said she was "flabbergasted" by the decision to also ban book sales at supermarkets, which remain open throughout the lockdown.

"It's incredible; it makes the book a totally forbidden product!" she said.

"Sure, there is a serious health situation and a need to protect the staff of bookstores and libraries. But the message being sent is catastrophic."

To keep up the pressure, French authors will switch on the lights of a bookstore of their choice at 3pm daily in a protest campaign launched by Tesson and Hidalgo. - AFP