It has been almost a decade since Louise Low’s last solo exhibition, Symphony And Oppression: Studio At Straits in Penang, in 2011.

Between that and her current exhibition Mass Against Mass, which opened last weekend at Petaling Jaya’s Suma Orientalis, she has been experimenting with different subject matters and unusual visual language.

Those who have seen her soft sculptures – where she wraps entire cars, chairs, trishaws and walkways with bras of all colours – would surely remember this. She has even fashioned a shark sculpture out of these brassieres.

“My intention was to explore the sensitivity and familiarity of the general public towards the object. I would like to expose this object to the audience, much like how superman wears his underwear outside, ” says Low.

“With such striking contradiction, I believe it will challenge the preconception of the general public towards women. It also questions the stereotype of women in their positions, and stimulates women themselves to rethink their roles in the society, ” she adds.

The 36-year-old has also taken this time to further develop her stunning mirror series, where she embeds mirror shards onto objects.

We see this in one of her works in Mass Against Mass, where human faces and mirror shards come together on a repurposed satellite dish. Louise Low's 'Condemned with Freedom' (acrylic and collage on board with rope and bearing, 2019). Photo: David Ong

With It’s Either What They Believe In Or What You Believe In, Yet Truth Lies In Neither One, Low would like the audience to ponder on how mass media, the fundamental channel of message dissemination, is a crucial factor in shaping our worldview.

“I would like the audience to approach the satellite dish, to talk or to shout towards it, feel the echo and watch how the human faces arrangement appears to be when integrated with the environmental reflection in the mirror shards.

“This is a reminder that our beliefs about all worldly affairs are based on learning. It is a wake-up call for us to own up to our outlook, if we can decide for ourselves what to see, what to hear and what to believe in, ” she elaborates.

Mass Against Mass revolves around the themes of society and freedom, its elusive nature and consequences that come with – or without – it. 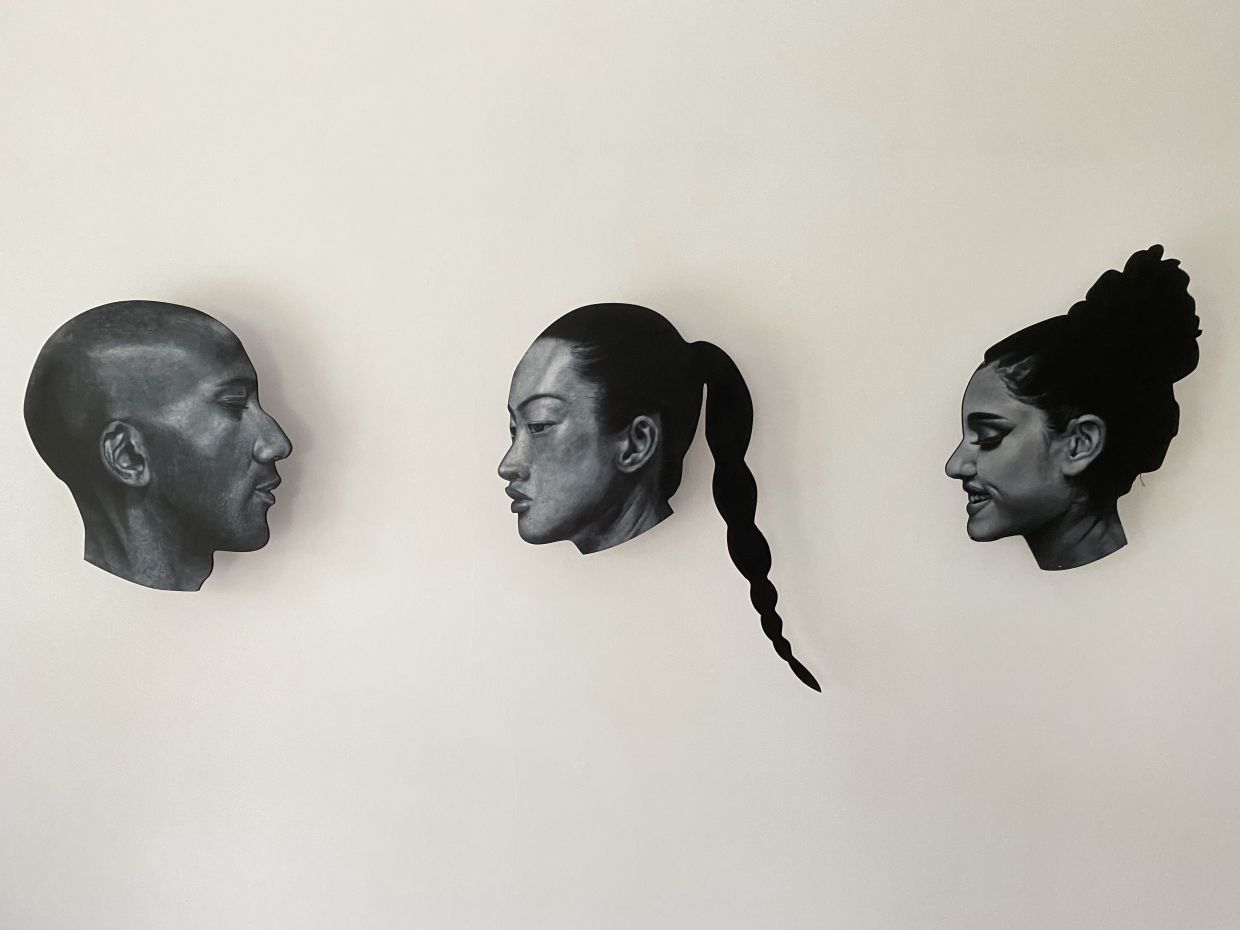 Louise Low's 'Yes, No And Perhaps, They Are All Answers' (acrylic and kinetic mechanism on board, 2019). Photo: David Ong

Low explains that at first glance, her works seem to portray that human beings are often exposed to situations where we have to make a choice. But she hopes to take it beyond that, to encourage the audience to dig deeper and uncover the layers of illusion and veiled truths behind reality.

“If we are ‘free’ to make a decision, are we free from the consequences of such decisions and actions? When we are ‘free’ to choose, are we liberalised to think out of the box – that is, to choose outside the options the society has projected to us? Must we walk down the paths others have, and must we conform?” she questions.

In her depiction of what decisions look like when they are made at the higher level of society, then impact individuals in a collective manner (like in the case of a policy or law), Low has packed tiny ceramic heads in 30 test tubes and hung them on the wall.

Somewhere In This World There Are Those Affected By What You Have Done is a commentary on how this is like a macro-scale social experiment.

“We should make decisions wisely and be responsible for our own course of actions. It is up to us to live life to its fullest with whatever we have. But do not believe in absolute freedom because it is non-existent, ” says Low. Close up of Louise Low's 'Somewhere in This World There Are Those Affected By What You Have Done' (ceramic in test tubes, metal holder on wood, 2020). Photo: David Ong

Mass Against Mass was conceptualised before the pandemic, the artist notes, but its contemplation on the correlation between individuals, society and freedom is just as relevant – if not more so – in our post-MCO, new norms world.

“I took my time to mature the ideas and now it feels just right to speak out about freedom. Just when all of us have experienced home confinement during MCO, nothing is sweeter than the taste of freedom.

In this exhibit, freedom remains an abstract concept as Low dissects its impact in the real world.

“To what extent should we as individuals give in when society rules over us? I also would like to question the existential freedom of mankind: just how unencumbered is man as a being among the herd?” she concludes.

Mass Against Mass is on at Suma Orientalis, 11, Lorong 11/4F Section 11, Petaling Jaya, Selangor till Oct 3. Opening hours: 11am to 7pm (Tuesday to Saturday).