“I had nothing to lose before, but now I have everything to fight for. I was quite aloof prior to becoming a parent but now, I shed a tear and get a lump in my throat over the silliest of things on TV or in movies, ” says Mohammad Yazid or Zid as he is popularly known.

Zid, 36, has two daughters – Zayra, who turns four next month, and Dalya, who is 16 months old – and he’s a hands-on dad. From changing diapers to feeding his girls to playing with them and putting them to bed, he does it all with his wife, Maisara Ainulsofia Abdul Rashid.

His wife, whom he calls Sara, is a self-taught seamstress who has put her dreams on hold to care for their small family while he pursues his career.

“Sara has been the most understanding person ... my work is sometimes very time consuming and I don’t think many people can put up with a partner who’s always ‘working’. It’s a blessing that I work from home as I can take short breaks to make myself useful around the house.

“Sara used to force me to play video games when I’m done with work because I don’t socialise or go out much. But that was before the children. Now, I only get to work after the children sleep. In the daytime, it’s anything goes, ” he shares. 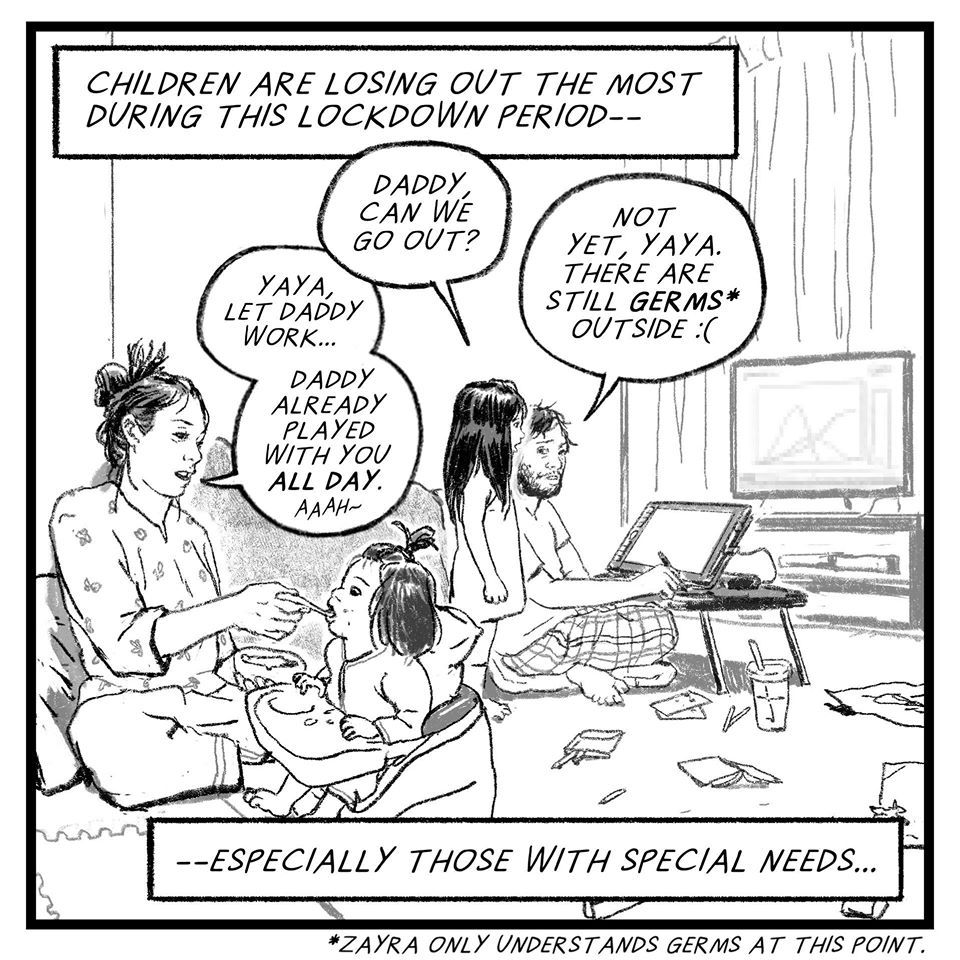 Zid details the long days of the same stay home routine during lockdown with his family. Photo: Zid

Zid started documenting his fatherhood journey in Diary Of A Work-From-Home Dad, single-page comic stories (on Facebook) about raising two girls while juggling work, about a year ago.

Becoming a father, he says, is both rewarding and exhausting, and Zid’s chronicles of fatherhood tell the story of the daily “challenges” of parenting.

The slice-of-life comics are both witty and moving, as the father of two openly shares the bittersweet experiences of being a stay-at-home dad.

Zid’s use of hyperbole to dramatise mishaps with his children are pretty spot on which makes his Diary Of A Work-From-Home Dad extremely relatable.

“I wanted to have something my children can read when they’re older and vicariously live through my experience in raising them, ” he explains.

The incident that became the catalyst for the comics was something completely humdrum: one night as the dad was applying powder on Dalya after her bath, the feisty little one struggled, sending the powder - puff and all - flying off the bed and onto the floor, leaving a snowy residue all over.

“I decided to immortalise this misadventure, ” he says.

He posted it and several other such stories on his social media feeds and pretty soon he had a following.

Zid, Sara and the two girls who changed their lives - Zayra (right) and Dalya. Photo: Zid

“Everything in the comic is 100% true and honest, although I do tend to exaggerate for comic effect... like how I leap, glowing eyes, and turn into Godzilla and so on, ” he adds.

Diary Of A Work-From-Home Dad is filled with such (mis)adventures that, thanks to Zid’s gift of storytelling - both through his art and words, tend to leave readers with a smile on their lips.

In Diary Of A Work-From-Home Dad #11:Fight Club, Zid writes: “For a first time father without any siblings growing up, I did my homework, reading help materials to prepare myself for parenthood. Turns out none of those ever mentioned about the cuts and bruises that (parenting) would entail. And I thought I had graduated to a ninja after Zayra. But every child is different. Dalya totally brought a different game. If my firstborn is a bludgeon, the second one is a cutter.”

Showing up for his kids

Zid hopes to be a father “who is present, who can provide a safe place for my children to confide in and freely seek advice from”, which is something he said he missed growing up as his parents were separated.

“I hope my children grow up to think, ’What Would Dad Do?’ when they are in situations that require judgement; and hopefully they’d make the right calls. I would have done my job then, ” he says.

“Fathers Day was always awkward for me growing up. It only became significant after I became a dad, ” he adds.

In February, Zid disclosed in Diary Of A Work-From-Home Dad and on his social media page that Dalya was diagnosed with Prader-Willi Syndrome (PWS), a rare genetic disorder that delays a child’s growth development. 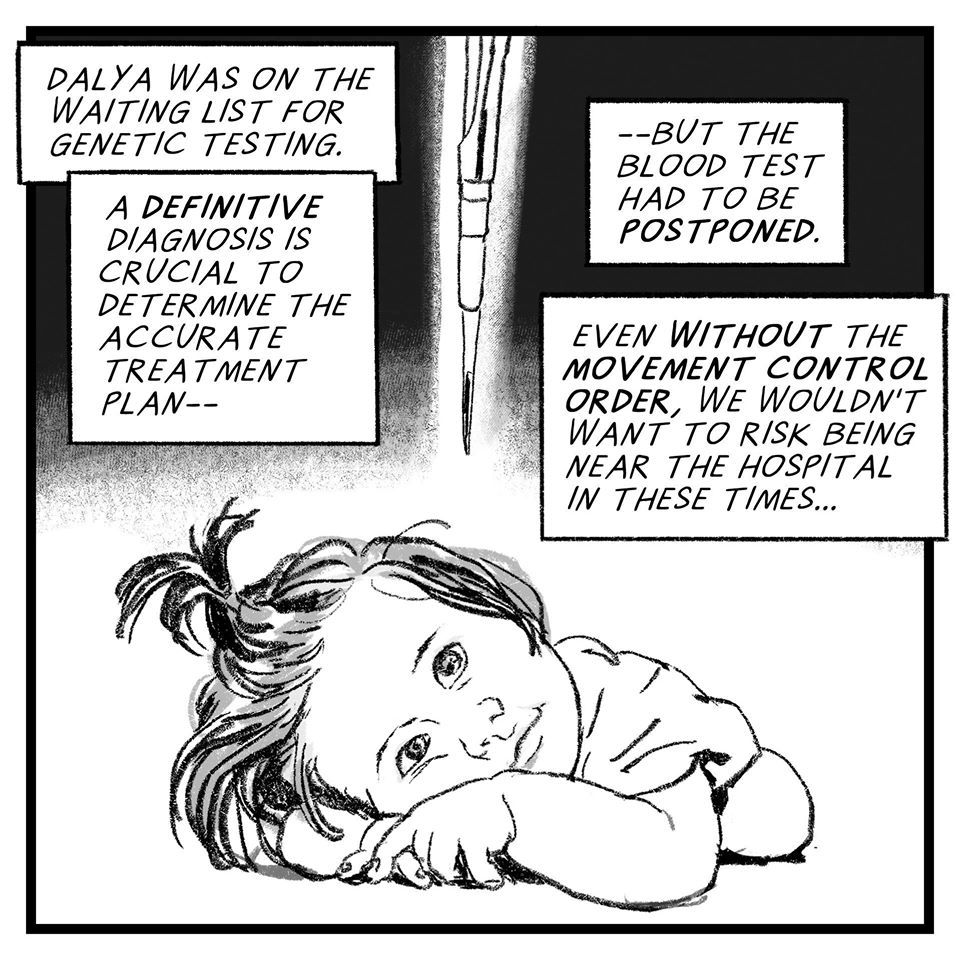 Zid decided to share Dalya's diagnosis in the comic and use it as a vehicle to spread awareness about PWS. Photo: Zid

“Dalya is my child and no condition (she may have) can make me love her less. We are all tested in different ways, sooner or later.

“It was at the back of our minds (that something was amiss with her) for a long while.

“At first we thought we didn’t do enough to encourage her development. In a strange way, we were relieved with the diagnosis as there was a solid reason for all the delays (in her development).

“I decided to share her diagnosis in the comic and use it as a vehicle to spread awareness about PWS. It could be somewhat of a support or coping reference for parents with PWS children. It helps to know you’re not going through a struggle alone,” says Zid. With a young family at home, Zid has made the necessary changes in life to be around to help his wife. Photo: Zid

There is another reasons he decided to embark on the the comic series.

“I get asked a lot by friends who want to quit working full time to be a stay at home parent like me, with the delusion of flexible working hours. They are dead wrong, but, in the eyes of everyone, we’re always free, ” he says.

A fan of comics from the time he was a young boy, Zid, who graduated with a degree in fine art from UiTM, reckons that he is “living my childhood dream” of drawing for a living.

A “work-for-hire” comic artist, Zid is currently working for an American comic book publisher, Legendary Comics, as the artist for the comic book adaptation of the Kong series from the Monsterverse franchise. His last work was the Skull Island: The Birth Of Kong series.

Although Zid draws for a living, working on the Diary Of a Work-From-Home Dad has been “the most fulfilling, emotionally”. 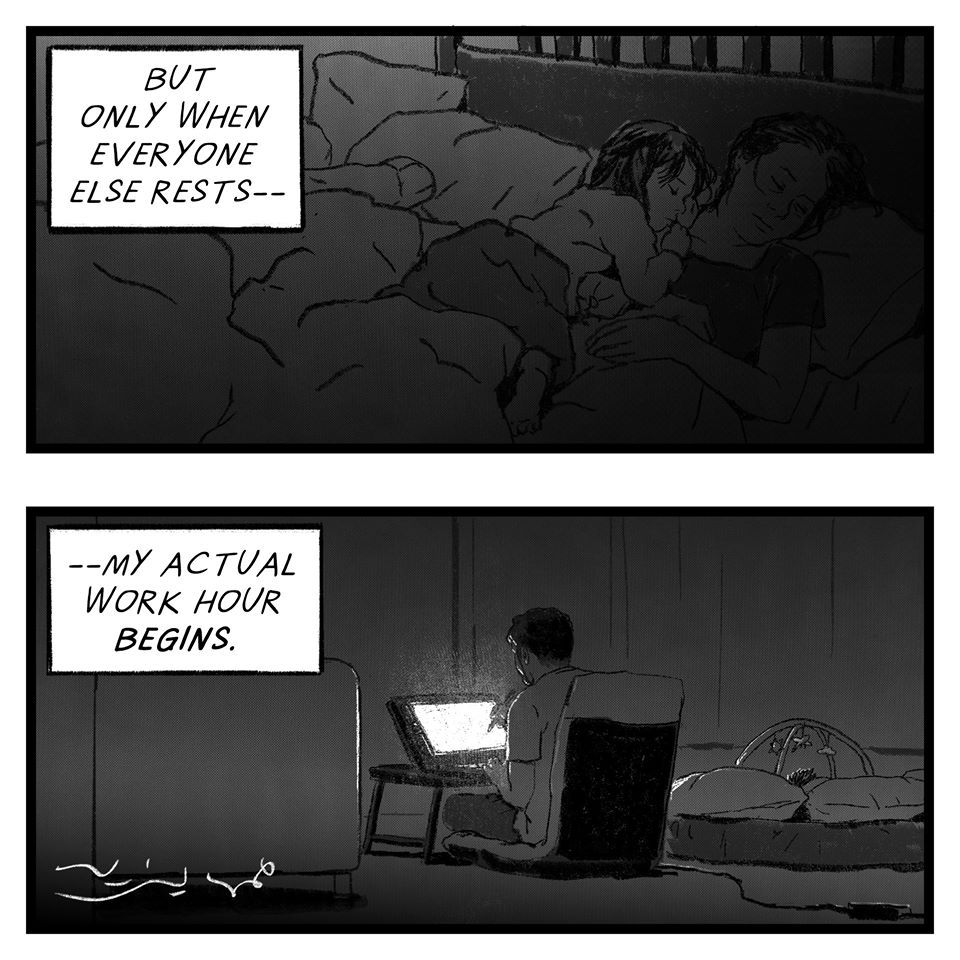 'I’m a work in progress. I’m still learning the ropes (of fatherhood),' says Zid, who uses the late nights to get his work done. Photo: Zid

“It was never about making a profit. I barely make anything out of it. As it was starting to get around, people urged me to come out with these sketches more consistently.

“So I set up a Patreon for it in the hopes that if I had financial support, I may be able to turn this passion project into my work, ” he says.

Patreon is a membership platform for artists to share their exclusive work and be paid for it through subscriptions from anyone who wants to follow their work.

Response has been positive so far, he says.

During the movement control order, Zid stopped charging for his work because he “felt there were others who needed more help that me”. Now that things are recovering, he has resumed his subscription services once again with new updates about his little family.

“While the fundamentals of being a father remains the same (always), I believe the approach may require a little bit more creativity and tact (now). Children learn quicker nowadays, with unfiltered information at their fingertips. Our responsibility to guide will be more challenging than what it used to be, ” he concludes.

Asian cultural groups try to save sacred swastika corrupted by Hitler
New art destinations to explore in the Asia Pacific region
Beyond football, Qatar is using cultural soft power to impress the world
Are there many women on your list of favourite artists?
New US musical brings high-energy world of K-pop to Broadway
Bondi Beach sees thousands stripping for cancer awareness photo shoot
Shine on: heritage campaigners save London's historic gas lamps
Horseman and hero: who is Argentina's 21st century gaucho?
Review: a portrait of an artist in Venice-winning documentary
US cartoonists honour 'Peanuts' creator in Saturday funny pages