Broadway has gone dark, but its longest running show is set to wow a global audience. Musical fans are in for a treat as legendary British theatre composer Andrew Lloyd Webber will stream his blockbuster production The Phantom Of The Opera on his special free content YouTube channel "The Shows Must Go On" on April 17 (7pm, BST).

In Malaysia, that means a bleary-eyed 2am kick-off on April 18. Perfect Phantom hour, mind you.

“Lord Andrew Lloyd Webber is calling all musical lovers! This Friday we’ll be bringing a musical theatre icon to the channel and releasing The Phantom Of The Opera for full and for free!" an announcement on Webber's YouTube channel read.

It's time for your "stay home" versions of The Music Of The Night and All I Ask of You with the show made available for 48 hours. You can tune in whenever you like over the weekend. Adapted from French author Gaston Leroux's 1910 Le Fantome de l' opéra novel, the 1986 musical by Webber has given us some of the most popular musical songs in Broadway history.

The version of The Phantom Of The Opera that will be uploaded is the 25th anniversary celebration show, which was performed in London in 2011. It features Iranian-Canadian actor Ramin Karimloo playing the Phantom and American actress Sierra Boggess playing Christine. Inspired by the original staging by Hal Prince and Gillian Lynne, this lavish, fully-staged production set in the sumptuous Victorian splendour of London's legendary Royal Albert Hall features a grand cast and orchestra of over 200, plus some very special guest appearances.

The Phantom Of The Opera played in Kuala Lumpur for the first time last June.

Webber's "The Shows Must Go On" series was launched on April 3. It also features a musical production picked by Webber every week, made available to keep the public entertained during the Covid-19 lockdown. Previous musicals shown were Joseph And the Amazing Technicolour Dreamcoat and Jesus Christ Superstar.

Webber has also been keeping in touch with fans on Twitter through isolation, taking requests for songs to play on the piano.

the phantom of the opera , the shows must go on , musical , theatre , online , sir andrew lloyd webber 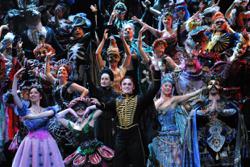