'I’m examining my emotions towards my culture by playing with historical imagery, injecting a sense of levity to a normally serious subject,’ says Sean Lean. Photo: UOB

Five years ago, visual artist Sean Lean explored the confluence of his Chinese heritage and “Western” upbringing in a colourful and insightful exhibition titled Motherland. That previous series was a keen study of identity and culture.

'Tiffany Blue Door (Heroine Of The Yangs, Mu Guiying)' (automotive paint on wooden door with steel frame, 2019). Photo: Wei Ling GalleryFor that solo show in Kuala Lumpur, this full-time artist produced 18 artworks, each depicting a recognisable Chinese character (from a dragon to the Goddess of Mercy).

Lean, who is based in Klang, Selangor, then deliberately removed elements which made these iconic images traditional and gave them a Western twist.

The 39-year-old visual and digital arts graduate from Limkokwing University College of Creative Technology is now back with a sequel exhibition called M2.

The exhibition is on at the newly renovated Wei-Ling Gallery in Brickfields, KL till Feb 29.

Lean is a regular at this gallery. His last solo exhibition called 3 (2018) was at Wei-Ling Contemporary. In fact, the artist had his debut solo in 2013 for his monochromatic Flesh: Blacks & Whites exhibition at the same gallery.

This time, Lean produced 14 artworks, diving deeper into his “obsession” with his own contradictory cultural past (growing up with a primarily Western outlook while very much tied to his Chinese roots).

“This was something I wanted to revisit. I thought it was unfinished business, that I barely scratched the surface last time around, ” says Lean in a recent interview, adding that these themes have been a passion since 2007.

“Sean has continued to grow and develop since he first started, taking his artistic journey to new levels through a witty and irreverent outlook on his identity and cultural background, questioning where he sits as a Malaysian in the context of his traditional Chinese upbringing, ” says Lim Wei Ling, gallery founder and director.

For M2, Lean decided to switch things around and experiment with the material.

Unlike the enamel and canvas pieces in Motherland, Lean opted instead to use hard steel as his canvas, stencils and automotive car paint.

“I like tension in my work. Things that don’t really fit perfectly or slightly out of place. I don’t really like things that are very settled, ” explains Lean.

“In this show, I wanted to do something that’s fun for myself and see what comes out of it.

“My previous body of work were quite serious and I wanted to take a break from that.”

However, the artist was surprised with the respect he felt towards the source materials.

“I expected myself to be less attached and be able to alter the images to a point where it breaks further from tradition. 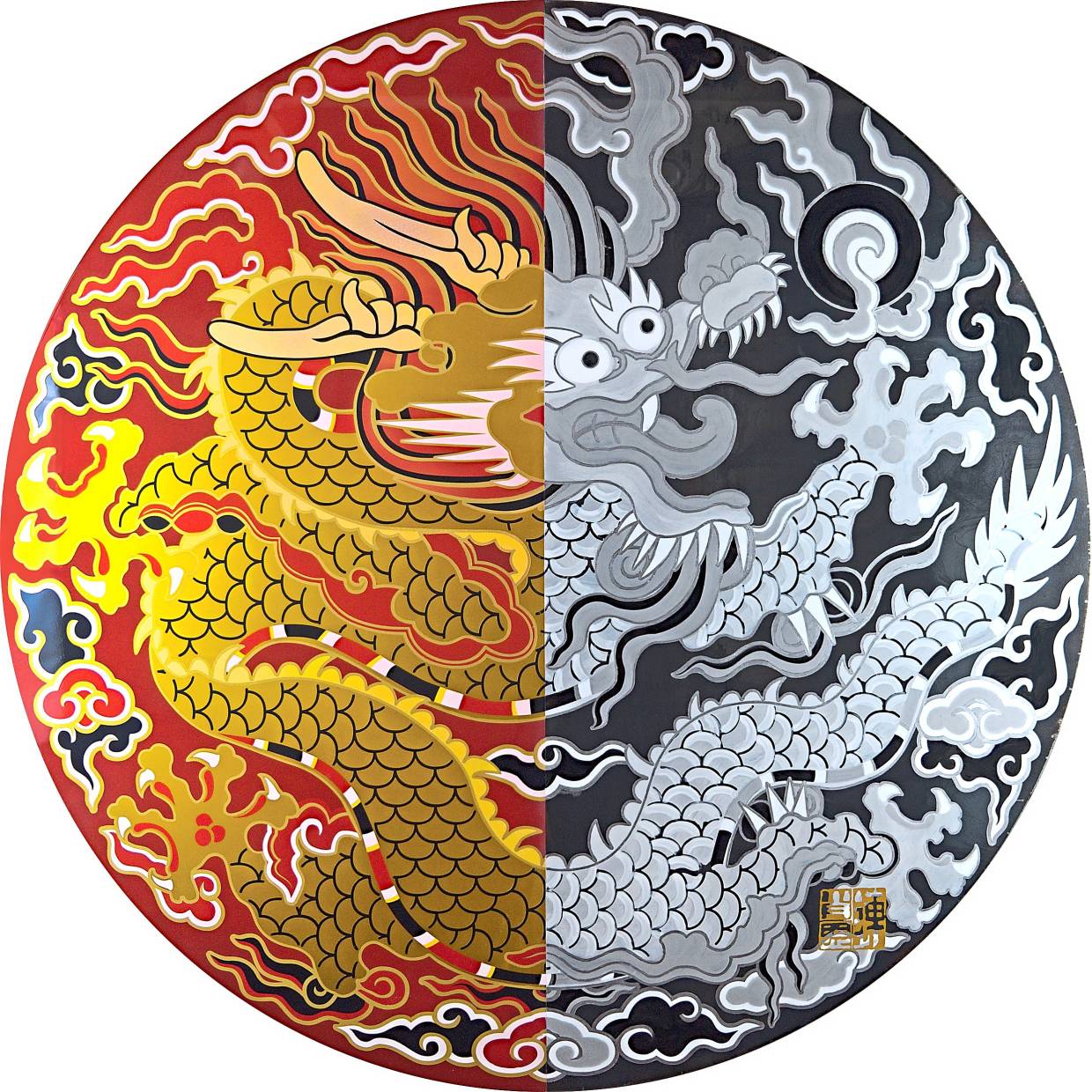 “But there was a sense of reverence to the source materials that I found surprising. I didn’t really think that I would be bothered by it but I was, ” he reveals.

Lean leaned on Chinese bedtime stories and a lifetime of disparate media that he consumed, from Romance Of The Three Kingdoms video game and TVB dramas to the Lord Of The Rings saga and American sitcoms.

And while these references were more specific in Motherland (remember the three Sanxing figures depicting a Roman goddesses?), M2 sees a much subtler approach, with Lean choosing to emphasise connections more with colour, technique and playfulness.

“Visually, the Western elements are not as apparent. At the core, the approach is about play, and not so much about having a final image before I start making the works. In that case, it’s less contrived and more organic.”

The works found throughout M2 brim with colourful vibrancy and cultural richness.

In his Crane series, Lean takes the image of a crane, a typical East Asian icon, and repeats them three times on steel. Each has a distinct change of colours. 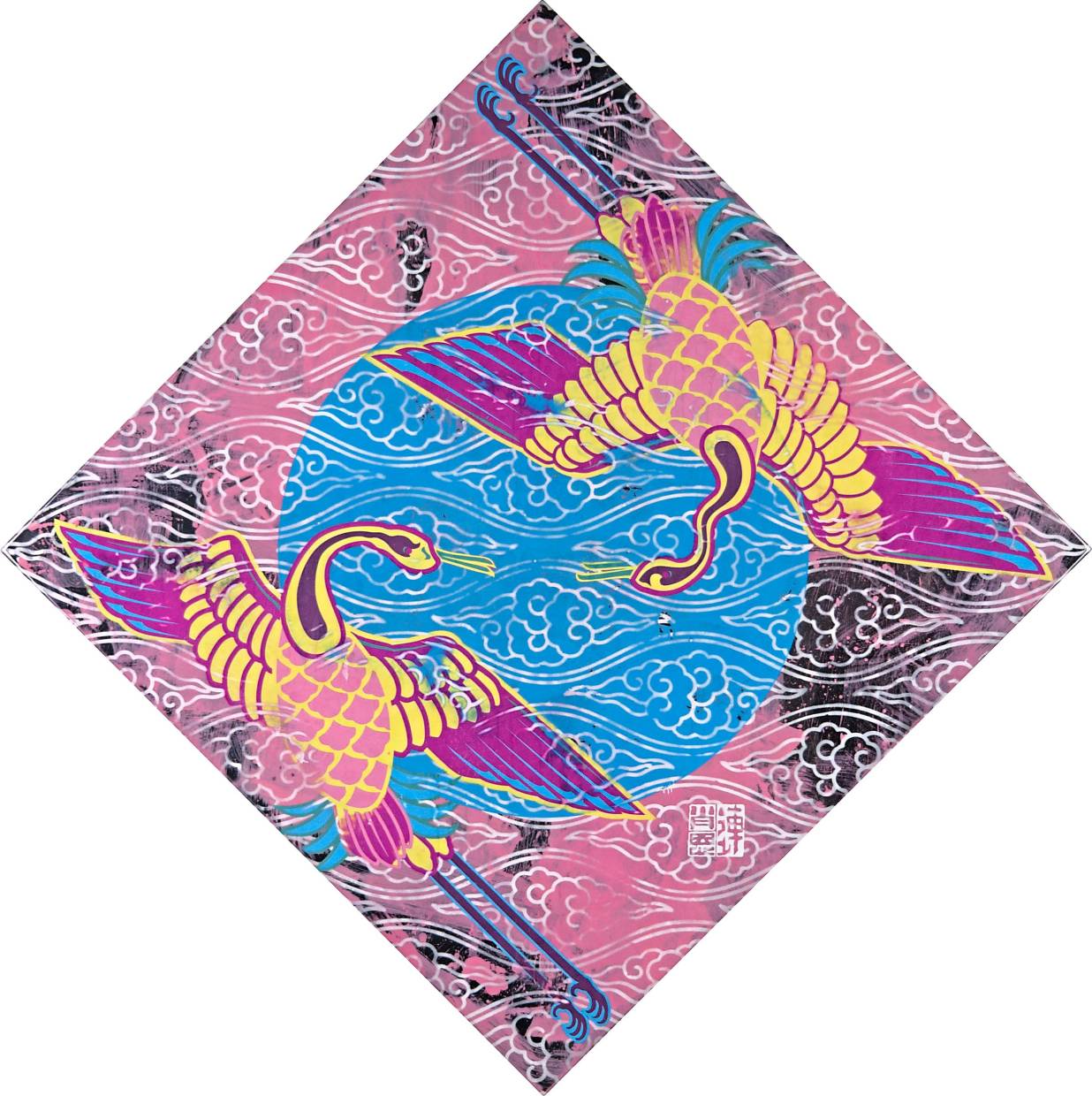 The first is in a more traditional palette (red, blue and white), the third in something more bold (bright pastel pink) while the second, middle piece sees the combination of both with the birth of a new colour scheme where they meet.

The symbolism is easy to follow here, drawing a clear line between that which is traditional to that which is deliberately different.

Another striking work is his piece Tiffany Blue Door (Heroine Of The Yangs, Mu Guiying). The 2m tall artwork features the image of a Chinese deity called Mu Guiying in bright colours, painted on a recycled door.

Interestingly, Mu Guiying is one of the guardians who would typically be placed on doors for protection.

But Lean subverts the classic image of the deity by depicting her as an opera singer.

Lean makes it clear that he wants to pursue these themes and blur more lines when it comes to identity and culture.

“I’m definitely going to continue in this path, ” he concludes. 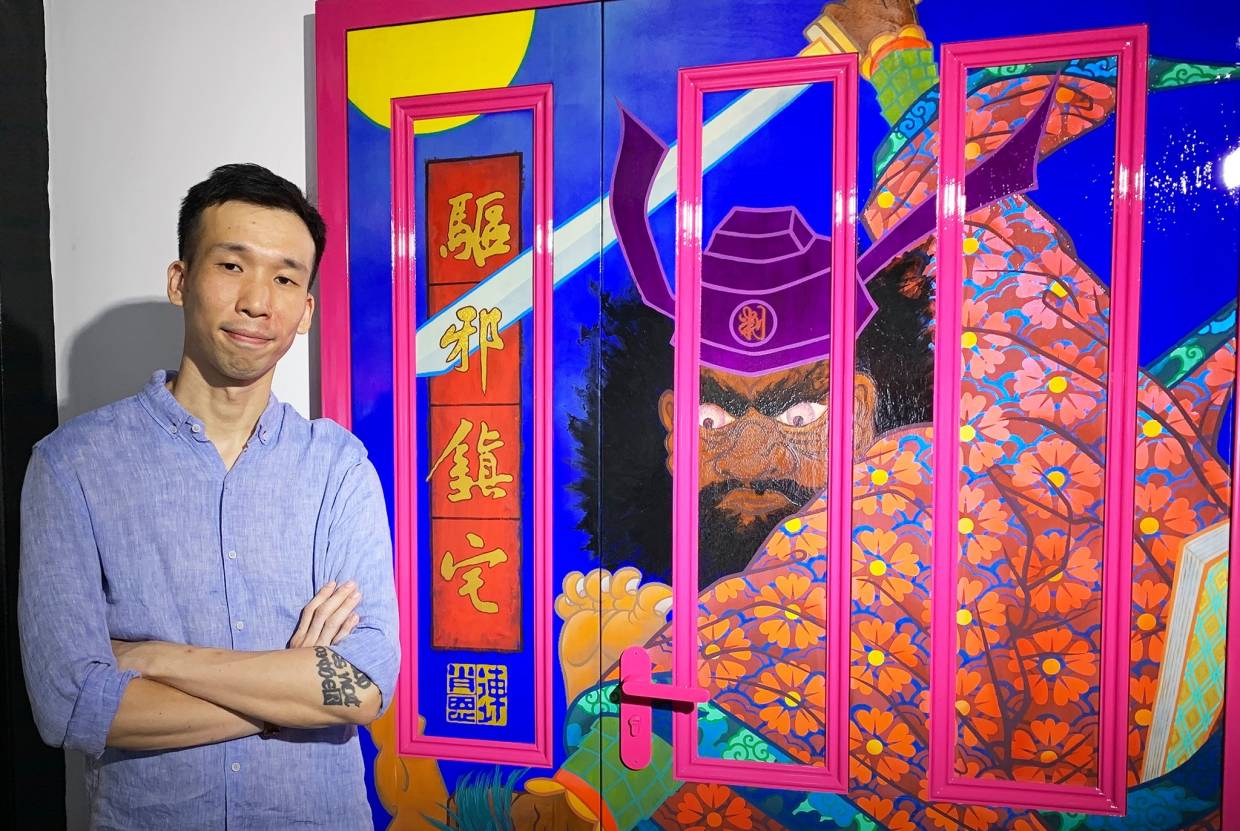 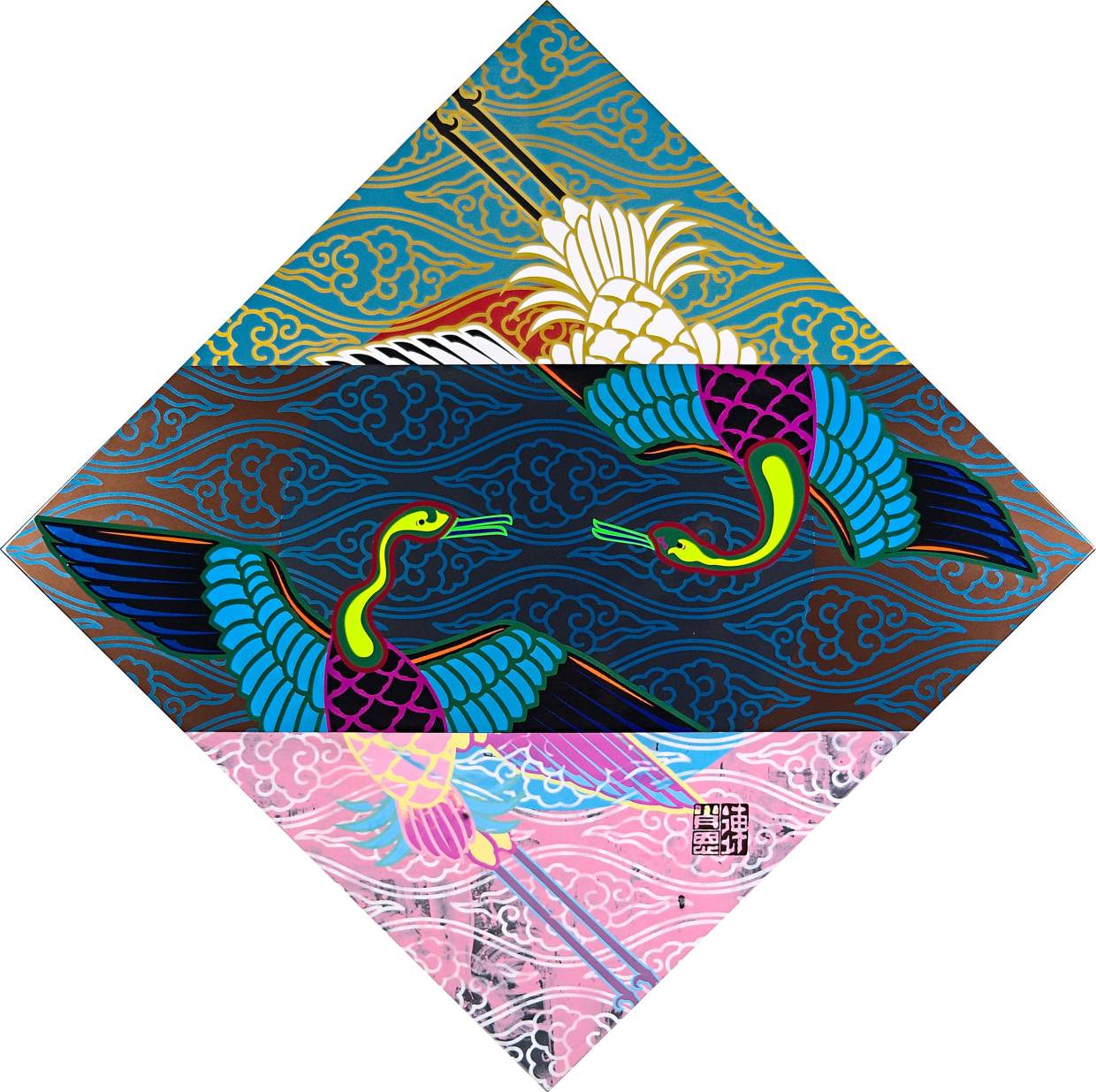 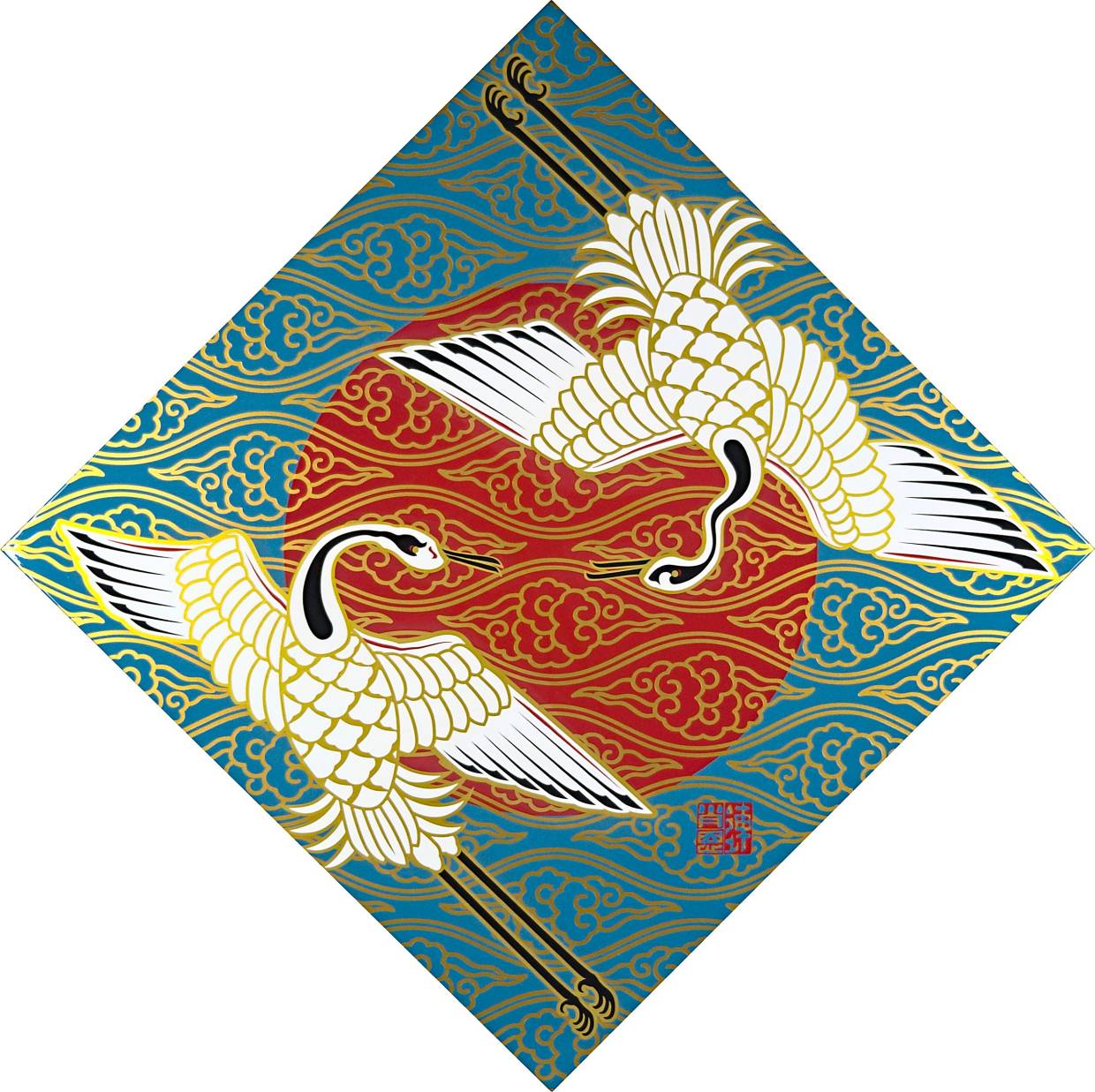 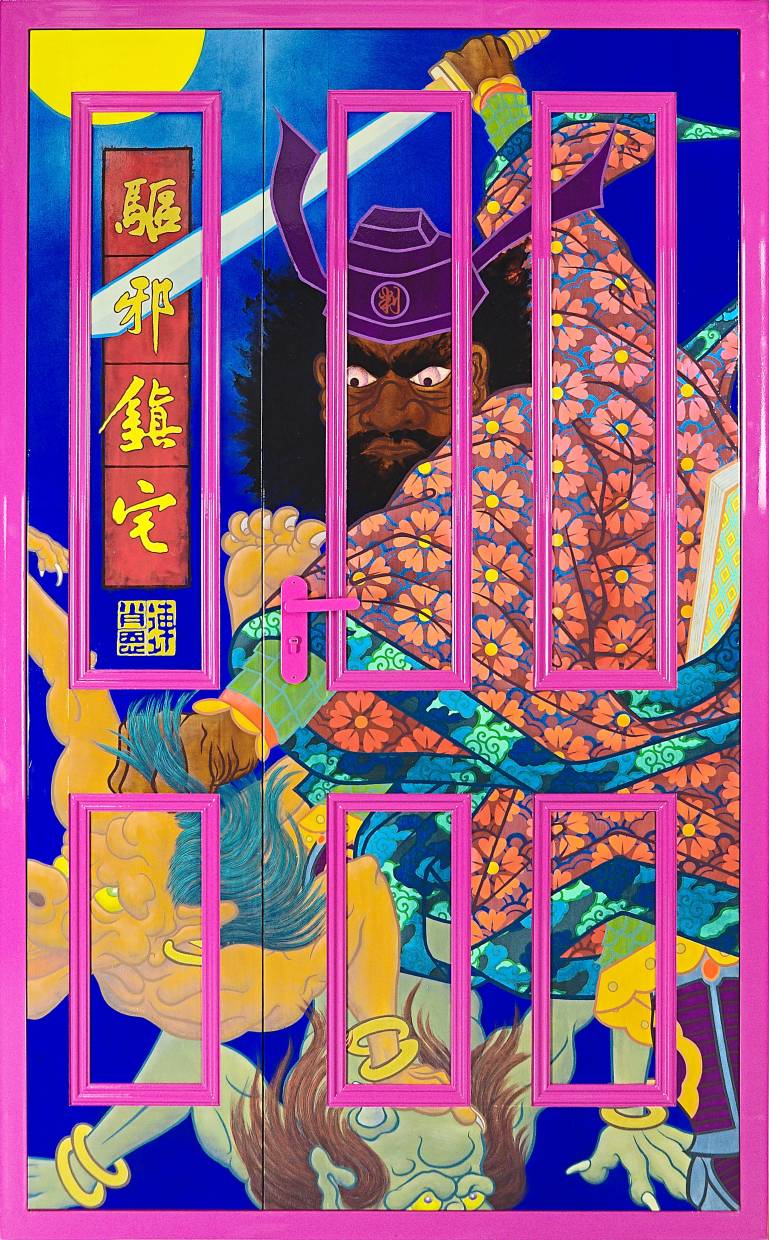 'I’m examining my emotions towards my culture by playing with historical imagery, injecting a sense of levity to a normally serious subject,’ says Sean Lean. Photo: UOB