Love is in the air with 'Sepet The Musical' 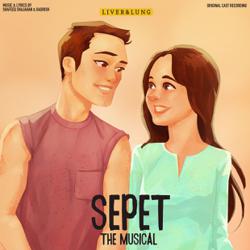 The late filmmaker Yasmin Ahmad’s legacy is undeniable and it lives on, especially when a new generation is now turning to her works for inspiration.

Theatre actress Badrika Bahadur was about seven when she first watched Sepet in 2005, a film she remembers fondly.

“I watched it with my mum. She encouraged me to watch it, saying it had a lot of values of Malaysian culture, and Yasmin Ahmad was showing them from a different point of view, and we should have the open-mindedness that she had,” says Badrika, who acted in theatre productions here such as Mahsuri & Other Peculiar Tales and Suessical The Broadway Musical.

“There are a lot of things in the movie that I didn’t get when I was watching it at that age. But now, watching it again, I’m like, ‘Oh, there are so many things in it that Malaysians, and people in general, are going through’. Issues brought up in the film still resonate,” she adds.

The role, she humbly mentions, comes with big shoes to fill.

“It’s a very sweet thought for me to find a balance of staying true to what Yasmin created with Orked ... the character that she is, and also what I can bring to the table,” Badrika shares with a smile.

Sepet The Musical is a production by Malaysian-British theatre company Liver and Lung Productions, whose previous musical works here include Mahsuri & Other Peculiar Tales and the Malaya Relived series.

In 2017, Liver and Lung Productions walked away with the Boh Cameronian Arts Award for Innovation in Musical Theatre award for Mahsuri & Other Peculiar Tales, a show featuring Malaysian folktales adapted in a cafe setting.

With Sepet The Musical, the Kuala Lumpur-based theatre company is set to expand its audience. The musical opens on Sept 19 and will be staged at GM Bukit Bintang Mall (GMBB) in KL.

Sepet tells of the love story between VCD (video compact disc – remember them?) seller Jason and student Orked. An innocent romance blooms between the two, which is unfortunately complicated later by racial and societal pressures.

For this musical production, Jason and Orked are played by young actors Joshua Gui and Badrika.

The show is directed and adapted by Shafeeq Shajahan, a playwright/director, who studied economics in London. He moved into the theatre scene while living in the English capital. He also founded Liver and Lung Productions with playwright/choreographer Hannah Shields in London in 2014.

This year, the theatre company has been been busy in KL with the Malaya Relived series, with three shows (The Fall Of Singapore, Merdeka and The Penang Riots) done and dusted.

Sepet The Musical offers a high-profile challenge for Shafeeq and his team. He composed the show’s music with Badrish Bahadur. Music direction is handled by Wai Leong and choreography by Shields.

The idea for the musical was conceived after GMBB, which hosted several of Liver and Lung Productions’ shows, wanted to do something to mark the 10th anniversary of Yasmin’s death. On July 25, 2009, Yasmin died of complications from a stroke. She was 51.

Sepet The Musical, most importantly, has been developed with the consent of Yasmin’s family and friends.

“It is important to me that Sepet The Musical is as authentic to Yasmin’s vision as possible. I have tried my best to pay homage to her gorgeous cinematic vision while using original music to reignite her timeless narrative for modern audiences,” says Shafeeq, 27.

The director realised the Sepet film, a cultural milestone in Malaysia’s cinematic history, would be a challenging stage project.

“Before I start a project, I always ask myself, am I the right person to tell the story? And I just felt like, after almost 15 years of Sepet, this narrative had to be told again. I thought very hard about it, and decided to go with it,” he adds.

With his experience in musical theatre, Shafeeq wisely decided to adapt the film with a straightforward approach.

“That was the most fitting option, given the subject matter.

“With musical theatre, it’s important to make sure the music fuels or enhances the narrative. And there are definitely moments in Sepet when you think, ‘okay, this would be a great place for that!’.

“Yasmin was a creative individual. She used music so powerfully in all her films and commercials,” explains Shafeeq.

In bringing the musical to life, the stage area of GMBB has been transformed to capture the Perak city of Ipoh as seen in the film. This includes a “CD shop” and a section made to look like a fast food restaurant from one of Sepet’s most famous scenes.

Adapting the musical’s script, Shafeeq mentions, had been a relatively smooth process.

“Yasmin laid down a very strong foundation. She captured the characters so well. The material is so timeless,” he says.

Sepet The Musical will feature 12 original songs, newly composed for the show by Shafeeq and Badrish.

“We took inspiration from the film itself, the soundtrack. We also looked at different aspects of Yasmin’s work, such as her commercials,” says Badrish, 18, who is Badrika’s brother.

Orked (Badrika) and Jason (Gui) enjoy a meal at a fast food joint made famous by the movie. Photo: Liver and Lung Production

During her years in the industry, Yasmin created a string of memorable TV commercials, some of which won her awards.

Badrish also mentions a musical highlight called The Song Lives On In Her Heart, which is about Jason telling Orked about his mother’s life with his father. The songs, arguably, will act as devices to help with the musical’s flow and backstory.

This stage production also only features the characters of Jason and Orked, played by Ng Choo Seong and Sharifah Amani in the film, respectively. All of the other characters from the film don’t appear.

“The movie had some iconic supporting characters who were all amazing. But I’m looking at Sepet The Musical as a journey. To me, it is very important to get the main characters right first,” says Shafeeq.

“I wanted to start with the two characters, and to focus on their love ... that’s what the story is about. I hope that in the future there will be a chance of expanding and incorporating more characters. I think this is just the beginning of Sepet The Musical.”

This posed a few challenges for the musical’s actors, who also had to narrate the story.

“The other characters are not there. So we’re breaking the fourth wall a lot to explain certain scenes. I’ve never done anything like this before, but it’s been a great,” says Gui, 29.

Gui, a regular in the local theatre scene (most recently seen in Pan Production’s Next To Normal) says Jason is an interesting character to play.

“He had many hidden depths. He’s also a hopeless romantic. He’s a poet in some ways, and read books, so he has a very different view of the world. He really breaks stereotypes,” says Gui.

Shafeeq aims to give this musical a laidback atmosphere. He wants people come to the show dressed up in their own “Jason and Orked” style: casual pasar malam look and baju kurung. Food and drinks will also be served.

“Yasmin was very brave. You can see it from everything she did. She always brought something that was quintessentially Malaysian to the forefront,” says Gui.

Today, when it seems that religious and racial fault lines are widening, it’s a good time as any to remember the glowing warmth that the Sepet movie offered all those years ago. The feelgood factor wasn’t manufactured, the film genuinely inspired the masses.

Shafeeq’s role now is to recreate some of that Yasmin Ahmad magic on stage.

“In Sepet, Yasmin tapped into issues of Malaysian identity and life that you didn’t hear much at the time. And it’s unbelievable that 14 years later, the themes that were brought up in Sepet need to be covered again. It’s sad to see that now, we seem more divided than ever,” says Shafeeq.

Sepet The Musical plays at GMBB in KL on these dates: Sept 19 to 22, Sept 26 to 29 and Oct 4 to 6. Showtimes are 8pm and tickets are RM70. More info: www.liverandlung.com/sepet. FB: Liver And Lung Productions.

Love is in the air with 'Sepet The Musical'