Sarkasi with his artworks View Of Life (right) and Light (background) at the National University of Singapore Museum. — ST

AT Serangoon MRT Station in Singapore, there is an eye-catching 18-panel print on glass filled with bold colours – a batik work churning with vibrancy and movement, almost as though it is reflecting the ebb and flow of the human tide.

Hundreds of people might glance at it every day, but not know that View Of Life was originally a piece of batik art by Sarkasi Said.

Appropriately enough, it is part of his Always Moving solo exhibition at the National University of Singapore Museum, which runs until Dec 31. This is the first time that the original View Of Life is being shown.

It is presented together with 10 other works, all of which are from the 1990s to the present.

Batik is an art form that Sarkasi, 77, has engaged in for much of his life. His grandmother was a batik dealer, but it was only when he saw Italian artist Ottavio Romano’s exhibition at Raffles Hotel in 1977 that he decided to focus on it as a medium.

Sarkasi recalls: “Batik must be from this region, so why was an Italian using it as a technique in his work? It should be me doing that.”

Sarkasi pictured in front of a piece called Light.

He began to eagerly learn all he could about it and he soon had an epiphany: “I realised that batik is actually not a product, it is a medium to express artwork using various techniques. It’s like print-making.”

On one level, his affinity for nature is rooted in his childhood. “I was lucky to be born in a kampung. I was surrounded by nature and always enjoyed being with it.”

At the same time, as a child whose parents split up when he was young, he also drew strength from the resilience of nature. “I went to gardens and small streams all the time, I slept in the Botanic Gardens, and it felt like I was part of nature. No matter what you do to nature, it grows and it develops.”

The nature-titled works on display at his solo show lean more towards abstraction than realism.

Curator Chang Yueh Siang says: “In the 1960s and 1970s, in capturing disappearing scenes due to urbanisation or responding to tourist demand, the kinds of work painted in those earlier years were a lot more represent-ational. We see over time a push for a more spontaneous self-expression that becomes much more abstract.”

As Sarkasi puts it, the move happened naturally. “When you start to paint, you paint an apple, a repetition of Mother Nature’s creation. But later on, it’s your feelings towards the apple. In abstraction, feelings express how and what you are.”

The monumental View Of Life was made for the Circle Line’s Art in Transit project and its starting point was nature as well.

Explaining, Sarkasi says that large swathes of Singapore were originally swampland. In his mind, just as a beautiful flower can bloom in a muddy area, tall buildings have sprouted along the Singapore and Kallang rivers. This development is thanks to “those who have always been looking for alternatives and were willing to venture (forth)”.

The work also reflects his personal view of life, to look on the bright side of things and be thankful even when life as an artist gets tough, which was especially true during his early days as one.

He sold his sketches by the roadside and when there were no sales, there was no income. To survive, he had to rope in his wife and four children to help sell nasi lemak and epok epok (a type of curry puff).

Sarkasi adds: “I could not afford to give them holidays, so I would bring them along for my demonstrations and classes. They started with washing brushes and slowly started to colour.”

His son, Ika Zahri, 50, is now a well-known batik artist as well.

While Sarkasi is open to working with him, he adds: “I would want him to develop himself and understand why he’s painting.

“He needs to find his own (way) so that it will be genuine.”

Having experienced first-hand the life of an artist, the only advice he has for his son is this: “If you want to be a full-time artist, there’s nothing that can stop you.” – The Straits Times/Asia News Network 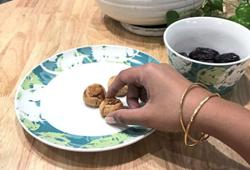