The ebi matcha sando is as tasty as it looks, delivering texural dimension and flavour in spades. — Photos: CC BY MEL

Over time, she deviated from the food path after developing a blossoming interest in floral design and calligraphy. A few years ago, she started a successful online floral business. But her love of food remained and Pong set aside some space in her floral studio, with the idea of one day opening a café.

When the Covid-19 pandemic struck, Pong’s floral business slowed down dramatically. And that’s when she and her husband Damien Lee decided the time was ripe to launch her dream cafe.

“Actually, I really love Japanese food a lot, so my initial thought was to do authentic Japanese food, but when we studied the Bukit Jalil area (in Kuala Lumpur), we found there were quite a lot of Japanese restaurants around here, so the first chef that we hired in December 2020 actually gave us the idea of doing Japanese fusion food,” says Pong. 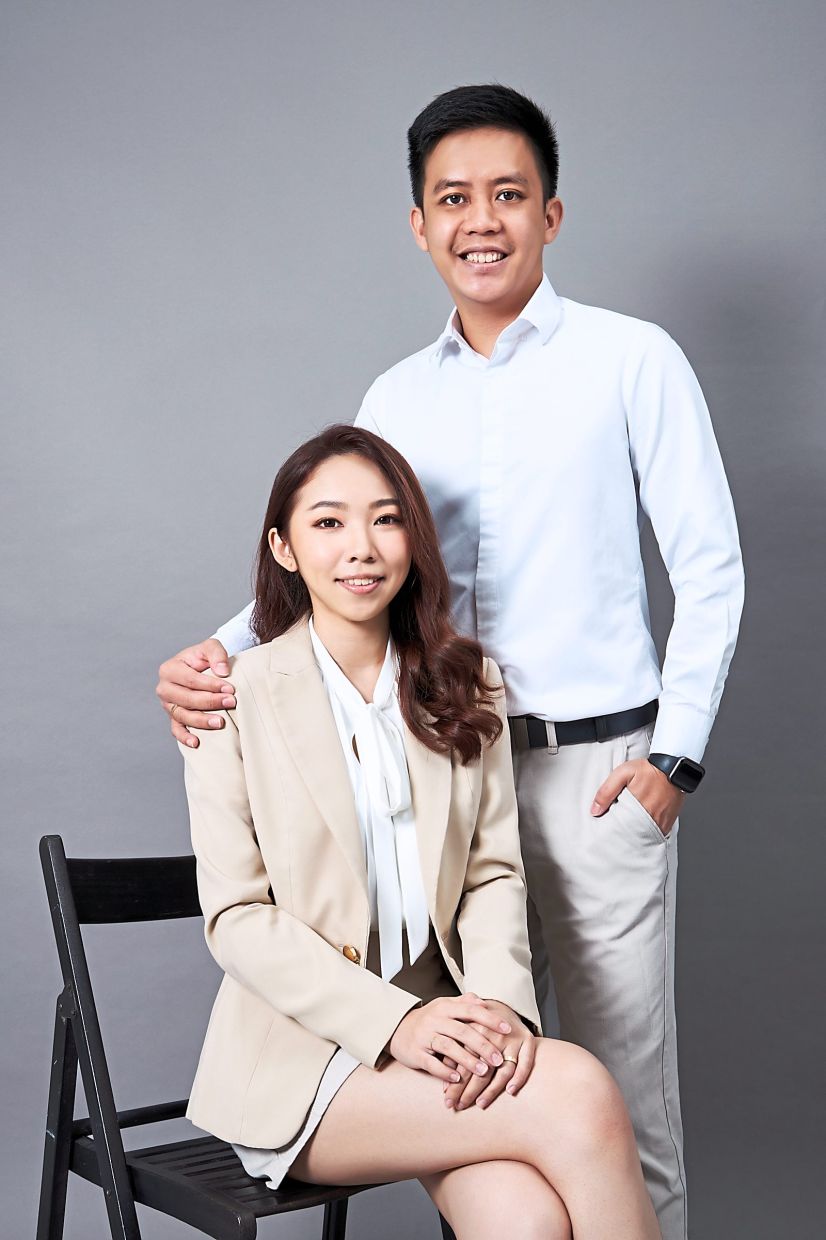 Pong (left) and Lee started CC by Mel early last year and went through numerous challenges before finding success with their brand of Japanese fusion food.

When the cafe – called CC by Mel – first opened in January 2021 in Bukit Jalil, the team was only able to accommodate deliveries, and had fewer than 10 items on the menu. For the first four months, they suffered tremendous losses because of the steep commissions they had to pay to delivery companies, as well as their own inexperience in the industry.

“At that time, our sales were not very high, we had not more than 20 orders a day for delivery and yet we were wasting money on premium ingredients like fresh salmon and tuna, because we were ordering either too much or too little.

“We didn’t know how to forecast the ingredients we had to purchase because we had no experience in the F&B industry. So unfortunately, we had a lot of wastage and that’s why we didn’t see any earnings from the business in the first few months,” says Pong.

But Pong and Lee persevered and their little cafe soon flourished. So much so that they decided to expand from their original little 30-seater space to a much, much larger spot that now accommodates double the number of people.

The food at CC by Mel is both interesting and aesthetically pleasing. To begin a meal here, look at trying the Trio Taco Box (RM68). This is one of the eatery’s signature meals and invokes the use of deep-fried nori (seaweed) fashioned into the shape of a taco shell. The contents placed inside the taco shell are then designed to mimic all the elements in sushi, albeit with a twist.

The taco box comes with three different nori tacos, so make sure to indulge on an empty stomach.

The gyu nori is made up of Angus striploin, pico de gallo, wasabi, avocado and Japanese rice. This is a meal that just screams “indulgence”. The meat is velvety soft and tender and this is accentuated by the other components in the meal, which offer flavour bombs in every mouthful. The tempura nori taco itself is a crispy and sturdy receptacle, which makes it surprisingly easy to hold in the hand, which in turns means eating the tacos isn’t messy or complicated at all. 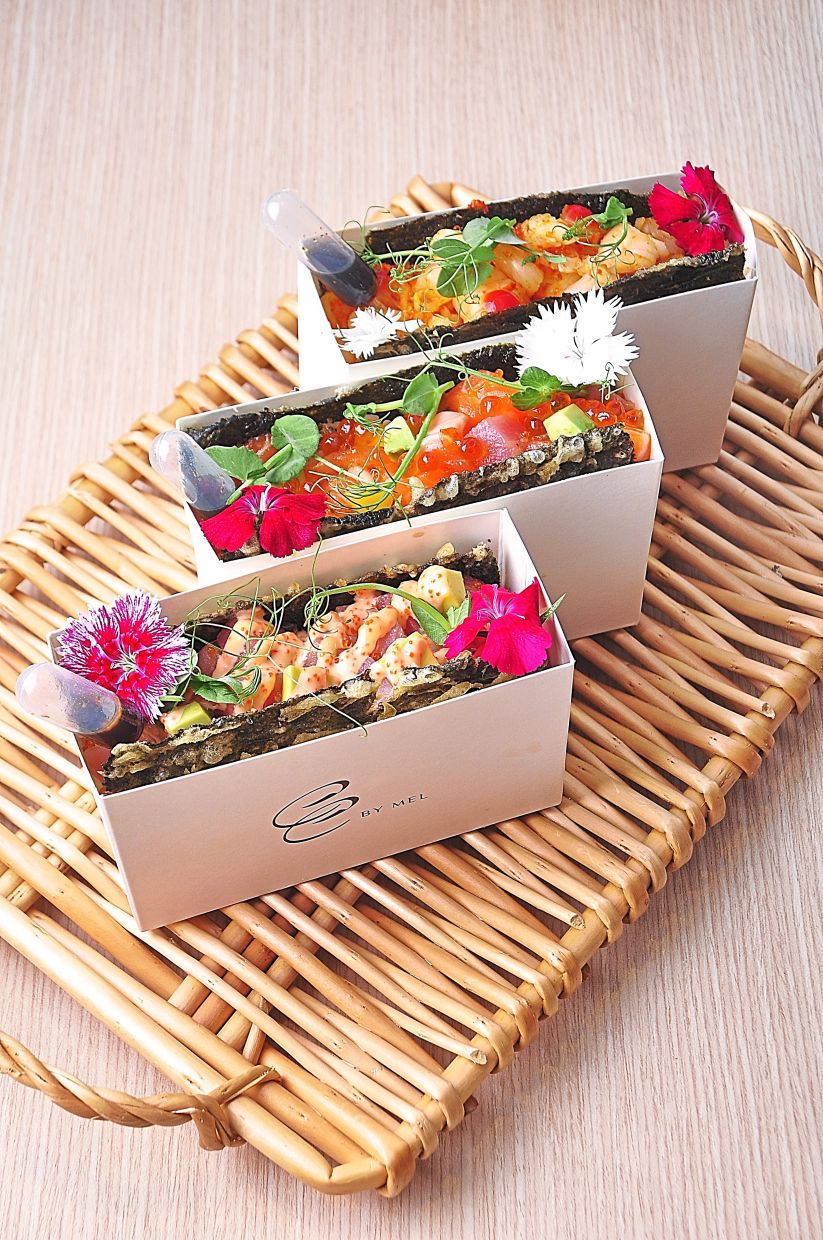 The Trio Taco Box offers three of the eatery’s signature nori tacos, which look gorgeous and taste delicious too.

The una nori meanwhile is made up of slices of unagi kabayaki (grilled eel), ikura (salmon roe), truffled eggs, avocado and tare (a soy-based sauce) mayo in what is a true coalescence of superhero elements. Think The Avengers, where every single team member is a superstar in their own right – this is exactly how the una nori develops flavour and team-builds its way to a memorable meal.

Up next, have a go at the tropica nori, which is essentially salmon sashimi, tuna sashimi, mango and avocado huddled together with Japanese sushi rice in a more classic take on sushi. In this installation, the seafood is fresh but somehow the overall effect is less impressive and less memorable than the other nori tacos in this triad.

On the pasta front, CC by Mel has a couple of interesting East-meets-West pasta options that are sure to tempt and tantalise, like the Truffle Puddle V 2.0 (RM48). According to Pong, this dish is a new-and-improved take on the original one, which was also popular, but ultimately proved far too cloying for many people. 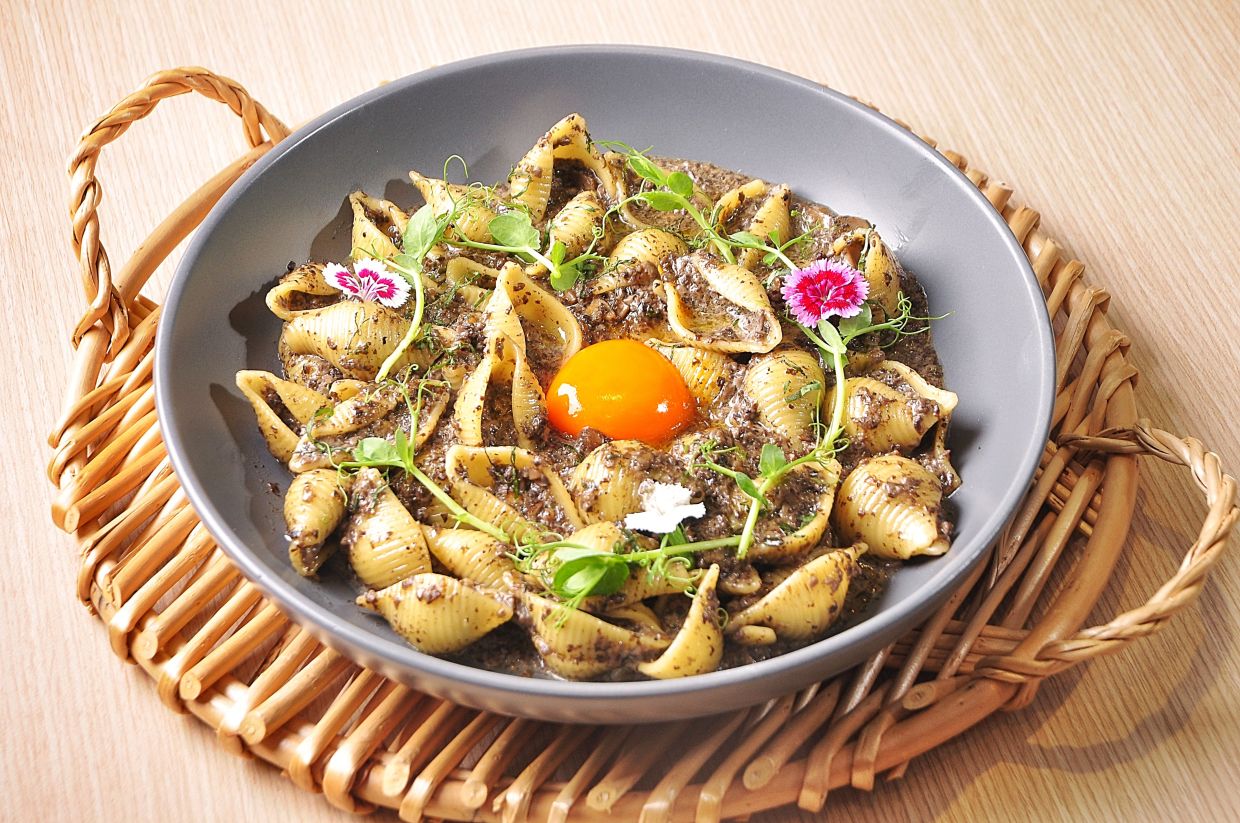 The truffle puddle has a lovely, woody mushroom base and is truly addictive.

“Customers tended not to finish the old version of this dish, which was rich and cream-based. So for the new version, we use different types of mushrooms to blend into a sauce and changed the pasta from pappardelle to a shell pasta. And even though the pasta grammage is the same, now we see that customers can finish the whole dish,” says Pong.

The pasta is delightful – just spear through the egg yolk atop and stir to enrobe the dish in golden goodness. The pasta itself is firm yet tender to the touch and couched in opulent truffle notes interspersed with the woodiness of the mushrooms in the mixture, which lends this vegetarian offering distinctly meaty overtures.

The Aka Ebi Capellini (RM45) features capellini pasta with Japanese prawns, sea urchin and fat ikura pearls in what proves to be a wonderful homage to the bounty of the sea. Here, aquatic flavours abound and the capellini acts as a mast that ably guides its ocean treasures to pleasurable shores.

Although the Angus Truffle Bikini (RM45) looks relatively simple, do not be fooled by its deceptive external appearance. Here, Angus beef slices are sandwiched between brown butter toast and topped with brie cheese and truffle aioli in a rich, opulent version of a classic beef sandwich. It is one of those offerings where all the components work extremely well together to deliver flavour and exhilaration in spades. The Angus truffle bikini is an upscale sandwich that will prove instantly satisfying.

For something to delight the senses and the eyes, feast on the colourful Ebi Matcha Sando (RM42), which is composed of matcha Hokkaido loaf stuffed with breaded prawn and egg, tamago and pickled purple cabbage in a wondrous match that provides both eye candy as well as dynamic flavour. The matcha is not too strong, which means you can truly enjoy all the components without any one ingredient overwhelming the other.

Wash down all the goodness of the food with the house-made Watermelon Sherbet (RM14), a vivid pink drink made up of watermelon juice, yoghurt, whipped cream and milk. This sweet, fruity treat is the perfect antidote to a hot, blistering day and will provide summer vibes and shots of escapism with each yummy slurp.

Having tasted success after working so hard, Pong says expansion plans are already afoot. She and Lee are now planning their second outlet in Mont Kiara, KL, while also simultaneously working on a totally different omakase restaurant, which they plan to open in Bukit Jalil.

“Both of these outlets are still in the designing stage, but we expect them to open in September or October this year. And eventually we want to expand to other states, but I think our team will require another two years’ experience before we can move forward with this plan,” concludes Pong.

Order from CC by Mel on ccbymel.com. 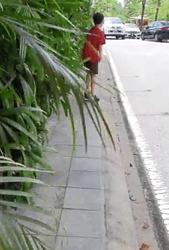