IF YOU grew up in Malaysia or other countries in South-East Asia, you would be very familiar with kaya.

The sweet and rich spread made from eggs, sugar and coconut milk is usually served with butter on toast for breakfast.

It is often used as a filling for buns, cakes, pastries and a myriad of other confectionery.

The origin of kaya is unclear but can be traced back to Melaka during the Portuguese occupation in the 15th century. It is possible that this delicacy was imitative of the Europeans’ curd-making practice that had become localised with coconut milk instead of dairy milk.

The word kaya means rich in Malay, but it could also have been derived from coalhada, the Portuguese word for curd, or rennet. If you have made lemon curd, you will recognise the similarities in its process.

The popularity of kaya then spread throughout this region, with each country staking a claim of its own version: Indonesia, seri kaya; Thailand, sangkhaya; and the Philippines, matamís sa báo.

Modern versions may incorporate other ingredients such as pandan, durian, pumpkin or salted egg into the kaya.

Many elders in my family had made kaya at some point, but I never learned to make it until I lived on my own in the US about 30 years ago.

I didn’t try to make kaya again until last year when I made kaya Swiss rolls for this column. I was unfamiliar with making it with fresh coconut milk. My first attempt was an utter failure that I had to resort to store-bought kaya for the cake.

This quick kaya recipe is the result of many attempts thereafter, with feedback from colleagues who were willing guinea pigs.

Traditional kaya requires that the custard be stirred in a double-boiler for four to eight hours to slowly develop the caramel. The quick kaya method calls for melting the sugar first before adding the coconut and eggs, which significantly shortens the time needed to achieve the deep caramel flavour.

Turning sugar into caramel is quite easy. Heat the sugar in a dry pot and it will start to melt immediately, or add water and allow the sugar to dissolve into a syrup and as the water evaporates, the sugar will turn into caramel.

I find this way easier to control the colour and viscosity of the caramel. You want it deep golden with the colour and consistency of honey. I would still recommend cooking the custard in a double-boiler and whisking it continuously to get that smooth velvety texture of good kaya.

Although the kaya will thicken in about 15 minutes, I prefer to cook for 30 minutes to produce a more translucent kaya. If you are making pandan kaya with fresh pandan juice, you will need to cook it longer to drive off the additional liquid. I find kaya that has been cooked longer also keeps a bit longer than the usual two weeks in the refrigerator.

Packed into glass jars, this luscious kaya makes a great gift idea for friends and neighbours as we celebrate Hari Raya Aidilfitri during the movement control order (MCO).

1) Stir in salt to coconut milk and keep in the refrigerator until needed.

2) To make the caramel, heat sugar and water in a saucepan until all the sugar has dissolved, then simmer without stirring until all the water has evaporated and sugar starts to turn golden.

3) When the caramel has reached the desired colour and viscosity, gently add in salted coconut milk, being careful to avoid the spurts as the cold liquid is introduced into the hot caramel. Add in eight shredded pandan leaves and bring to a slow simmer until all the caramel has combined with the coconut milk and becomes a thick syrup. Remove pandan leaves and allow syrup to cool completely.

4) Whisk eggs in a mixing bowl until yolks and whites have completely combined. Add eggs into the cooled syrup and strain the custard mixture through a wire mesh.

5) If you are making pandan kaya, divide the mixture into two separate bowls. Blend about 20 pandan leaves with half a cup of cold water and strain the juice through a muslin bag or cheesecloth. Add the pandan juice into one of the bowls of the custard mixture.

6) Pour the bowl of custard mixture into a double-boiler or bain-marie over medium heat and whisk continuously until the custard thickens, for about 30 minutes. The curd will be translucent and continue to thicken as it cools. Pour into jars and store up to two weeks in the refrigerator. 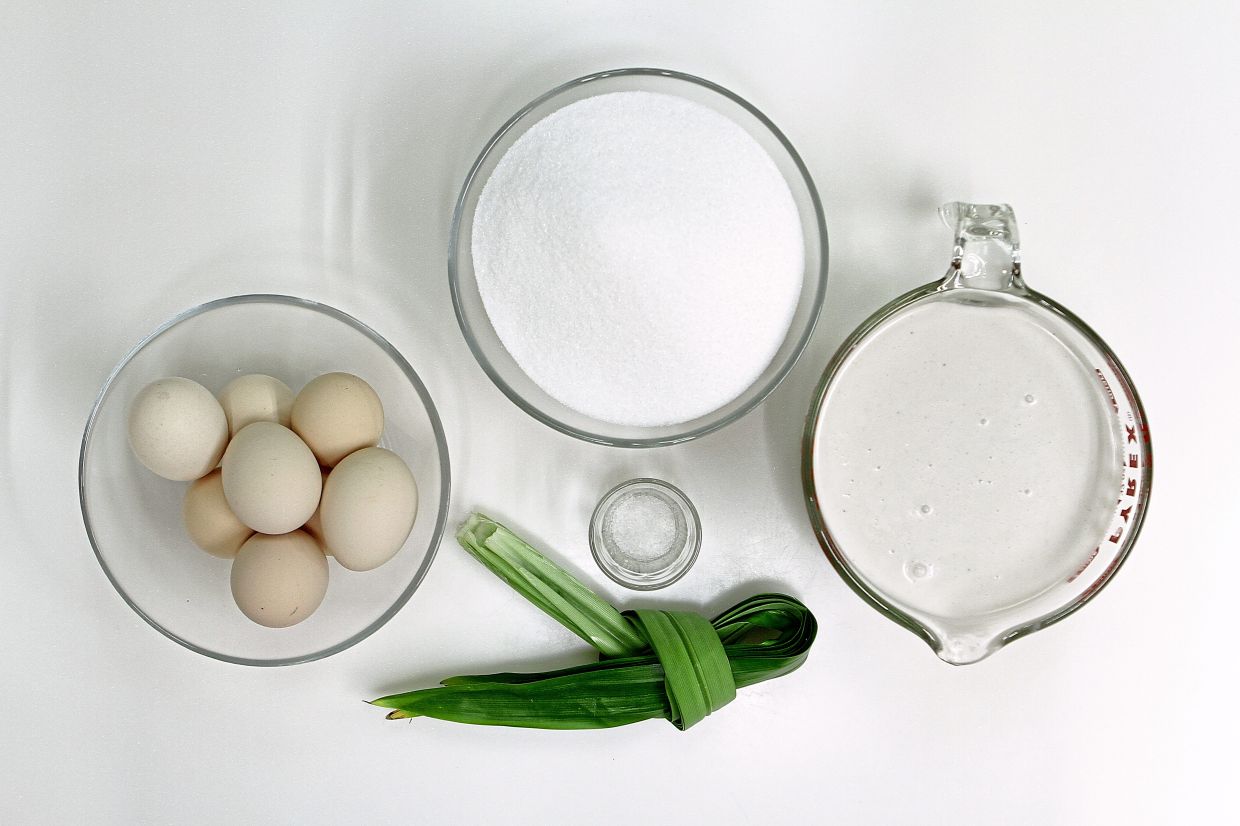 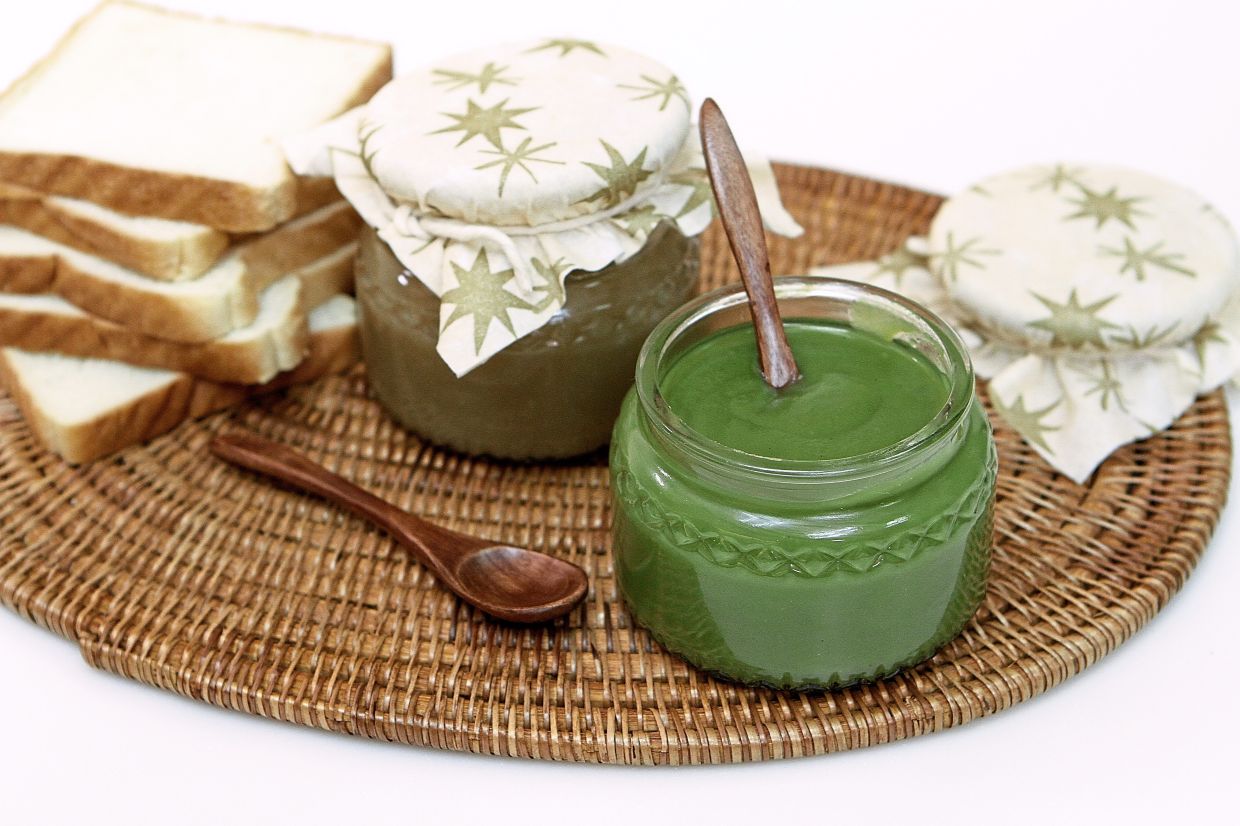 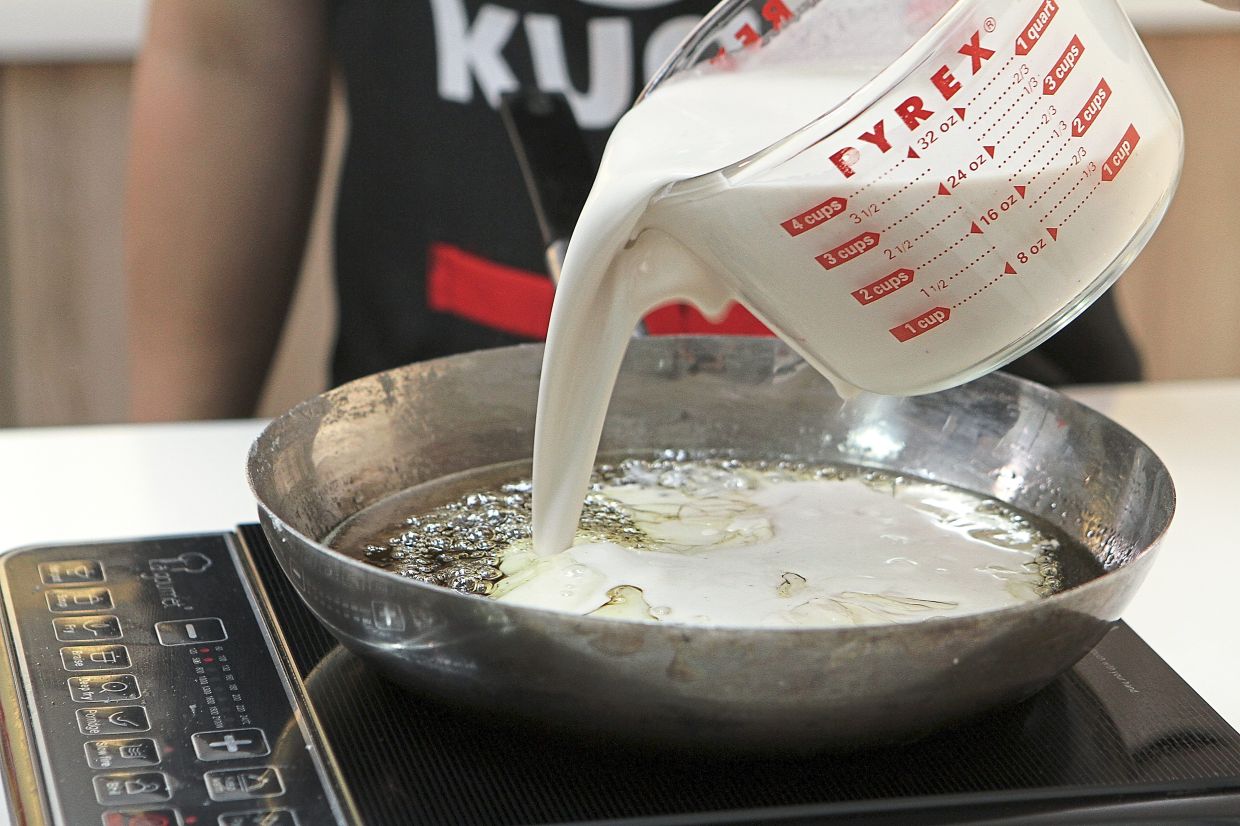 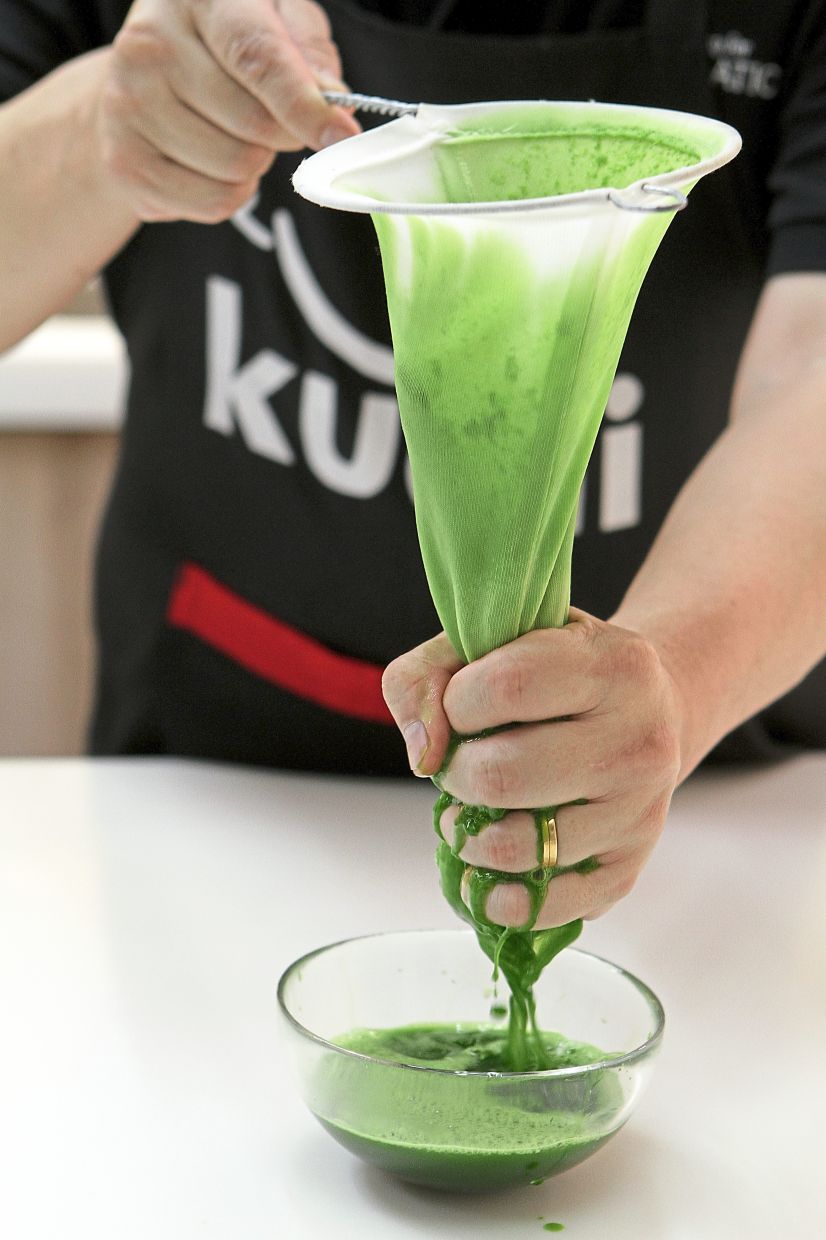 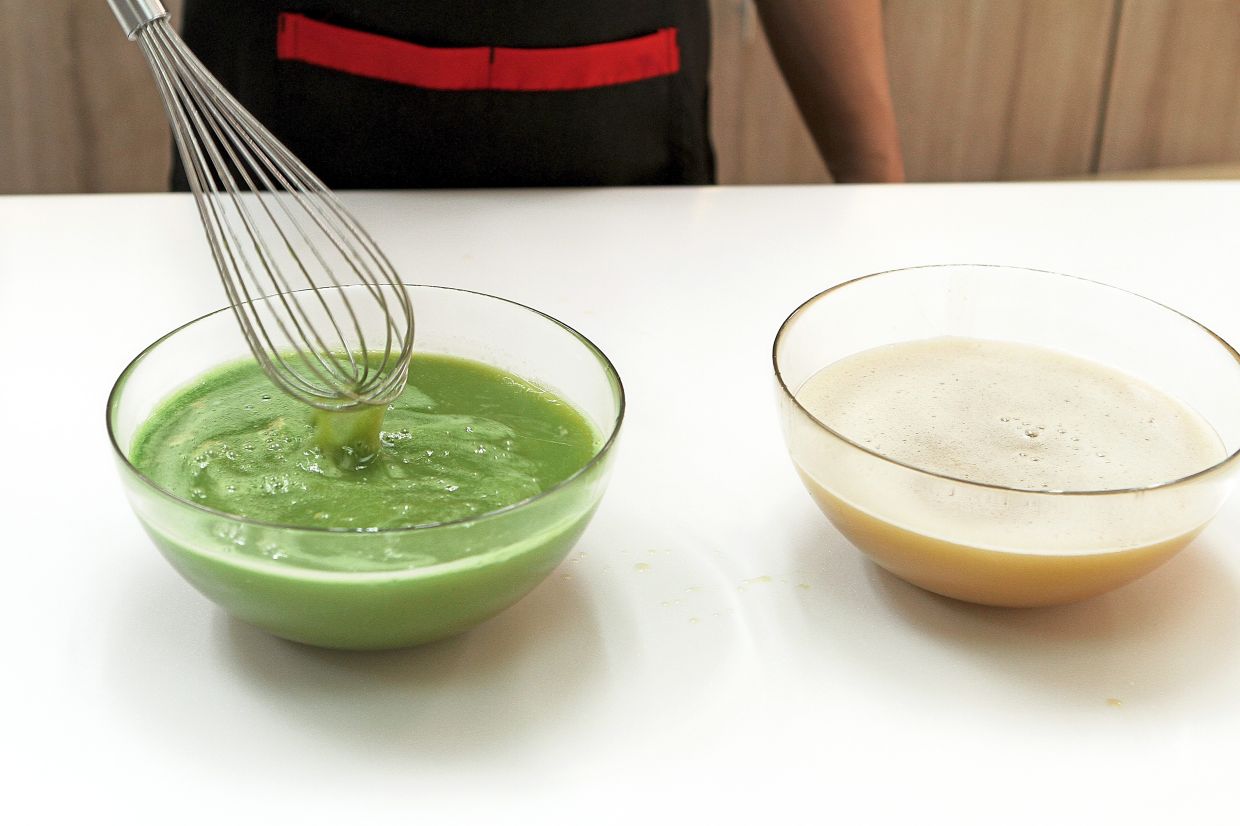 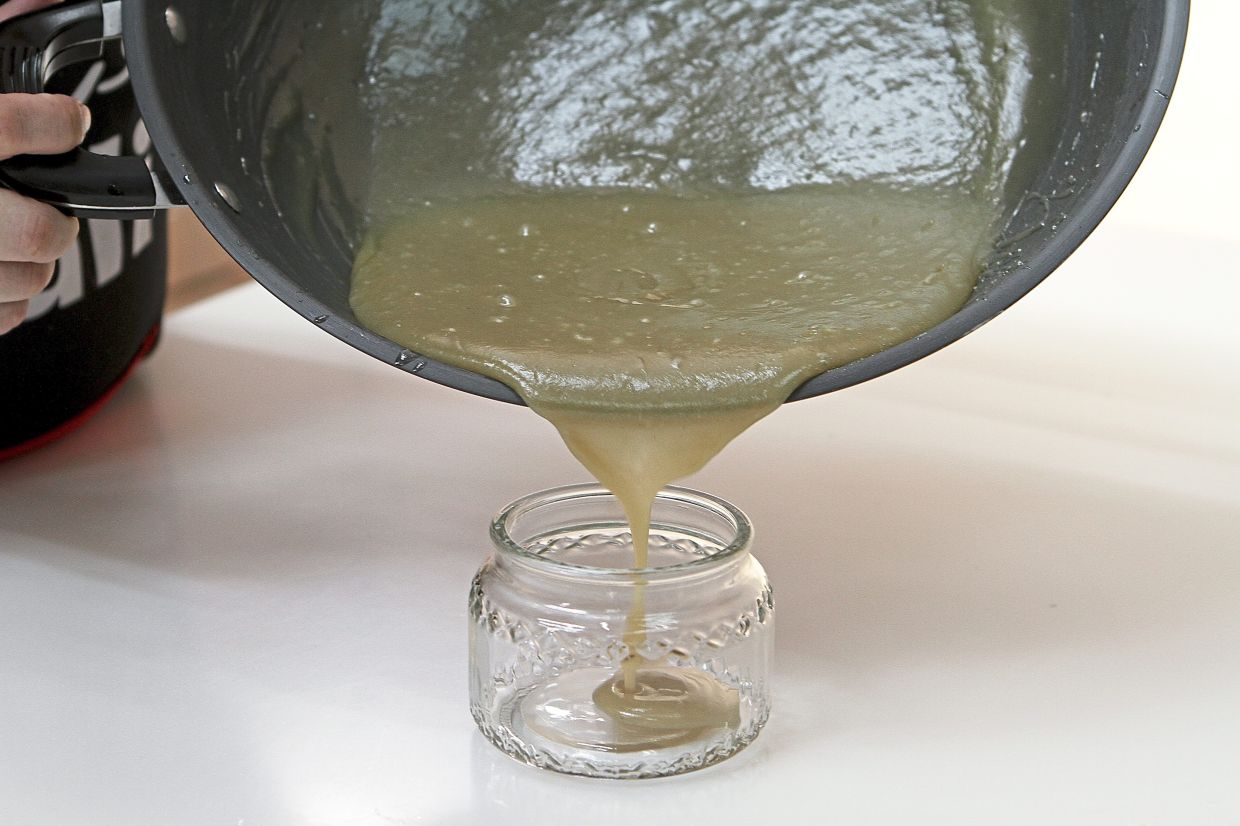 The ingredients for kaya are eggs, sugar and coconut milk flavoured with pandan leaves and salt.

Kaya is usually served with butter on toast for breakfast.

Add coconut milk when sugar has melted and turned a dark caramel colour.

Grind pandan leaves in the blender and strain its juice through a tea sock.

Simmer coconut milk with pandan leaves until caramel has dissolved, then strain through a sieve and cool completely.

Add pandan juice to one of the bowls of coconut caramel custard mixture.

Kaya stored in the chiller will thicken into a spreadable jam and can keep for about a week.