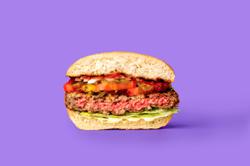 Tan didn't cook much before but has learnt how to make simple Chinese meals for her family during the movement control order period. — GRACE TAN

In the modern age, family meals can take all sorts of shapes and forms – whether it’s eating out, ordering food online or making home-cooked meals.

But throw a movement control order (MCO) into this equation and these seemingly expansive options are gradually narrowed down to one mainstay: home-cooked food.

These days, a legion of home cooks are finding ways to whip up daily meals for their broods, all while navigating the various stumbling blocks thrown their way – less stocked supermarkets, limited opportunities to shop and fussy eaters, among them.

For many home cooks, the MCO has thrown a spanner in the works of previously set-in-stone routines.

“Oh, it’s very challenging because I hate cooking! Before the MCO, I usually just did takeaways and only cooked once in a while but now I’m cooking for my family every day. I told my husband I cannot take much more of this – I am going to kaput!” exclaims Fathiyah Mohamed, 37, a school teacher and mum to three children, aged 10, seven and four.

For photographer Grace Tan, 41, the MCO has actually been a turning point for her, as she has had to learn how to cook simple meals for her husband and two children, aged seven and five.

“Before this, our lifestyle was such that twice a week, we would go over to my in-laws’ place and have dinner there. And I actually have an Indonesian helper who cooks for us too, but she went on holiday to Indonesia and is still stuck there.

“So with no one around, I have had to learn how to cook simple Chinese dishes through YouTube, although I do cheat and order food sometimes, ” says Tan, who didn’t learn from her mother who was a fabulous cook who won cooking competitions in the 1980s.

Odelia (standing) says she can’t always find the ingredients she wants but she is making do with what she has. — ODELIA ZARSADIAS

Even home cooks who enjoy cooking have found that being the main person responsible for providing nourishment for an entire family can be stressful to say the least. Like full-time mum-of-two Odelia Zarsadias, 36, who has been cooking non-stop for her family since the MCO started.

“Before this, I cooked quite often but we could also opt to eat out or order food online. Of course now it’s a bit difficult because you can’t really go out. So I have been cooking every day now – it’s crazy, you know? I’ve never in my entire life cooked for seven days straight before!”

“And now that the kids (aged seven and four) are at home all day, they have two snacks between meals and then they’re hungry again. To top it all off, the kids are fussy, especially my daughter and it’s not easy because I have to think of family meals that will be able to feed both the kids and the adults, so it can’t be so bland, ” says Odelia who has whipped up meals like wantan mee and fish and chips, among other things.

Yoga studio owner Suhana Ishak says her routine too has been completely upended as her sons, aged 10 and 7, used to eat lunch at school every day, so she only had to cook them dinner. But now she has to figure out all their daily meals, which means she’s had to shake up her cooking repertoire as well.

“I definitely spend more time in the kitchen and there’s a lot of cleaning up to do and also a lot of planning in the sense that I need to have enough food to last at least a week, if not more.

“And I’ve had to change how and what I cook, like before I used to just grill, roast or air-fry everything. But now I find that cooking rice and a few dishes is a good way to stretch the ingredients, ” says Suhana. Even home cooks with older children have been feeling the heat. Freelance graphic designer Goh Wei Lee, 49, says now that her teenage children, aged 16 and 19, and her husband are at home all day, she has been forced to make an abrupt transition from cooking relatively simple meals to more elaborate affairs.

“Before this, it was just me and my son at home, so my food was very simple. But now, because there are more of us, I need to prepare more food.

“Sometimes my children have cravings and demands because they are stuck at home all day, so I have to do some research on YouTube to find the recipes, ” says Goh, who has totally stopped ordering food from outside during this period.

Cooking every day for a large family is already a tall order, but there are other hurdles for home cooks to overcome during the MCO, such as not being able to find certainingredients in supermarkets.

Odelia, for example, says supplies are perpetually dwindling in her neighbourhood supermarket.

“I haven’t been able to find eggs and vegetables are very limited and even if it’s there, it’s already old. Also, there are not a lot of fruits either. The shelves are a bit empty, everything is a bit haywire, ” says Odelia who doesn’t really care if her dishes are missing a few ingredients as the pandemic is an unprecedented situation. Some home cooks also take the precaution of sanitising all the groceries that they purchase.

“It takes me over an hour to sanitise all the food that I buy, before I can even put it in the fridge. I never used to do this before, so I find it very time-consuming, ” says Goh.

Goh says however that having limited ingredients and few opportunities to go grocery shopping means that she has had to think outside the box in the kitchen and make do with what she has.

“A few days ago, my children wanted loh ma kai (steamed glutinous rice dish), so I made it for the first time using whatever I had in my fridge. I didn’t have a mould, so I just used some aluminium foil to mould it, ” she explains, laughing.

For newbie home cook Tan, her dilemmas are a little bit different.

“My husband does the grocery shopping but when I look at some of the vegetables that he’s bought, I think to myself, ‘Oh my God, what veggie is this? How do I cook it?’ So I normally look through YouTube or call my mother-in-law for advice or simply chop it up and cook it – not even knowing what it is, ” she says, laughing. Anusha's vegetable garden has come in handy during the MCO as she is able to utilise fresh vegetables like bitter gourd and kangkung in her family's daily meals. — ANUSHA NAIR

This entire episode has also forced some home cooks to become more resourceful.Anusha Nair, 37, a doctor and mum of three has always cooked daily meals for her family but now finds that she has to get her supply of fresh produce from alternate sources.

“I used to get our things from the wet markets before but some are closed and I think supermarket prices are at a premium. So now through Facebook groups, I have been able to source people who deliver market produce like vegetables and fish directly to our home because I don’t want to go out too often, ” she says.

Anusha has also started making bread for her family during this period, as well as utilising vegetables from her garden like bitter gourd, sayur manis and kangkung.

Because cooking every day for the family can be challenging, some home cooks have opted to enlist the help of their children in the kitchen.

“I definitely have to ask my children to help me out because I don’t like to cook. They help me with the prep work like cutting onions and there are some things they do on their own, like making doughnuts. And I force them to do the cleaning up as well, ” says Fathiyah, laughing. 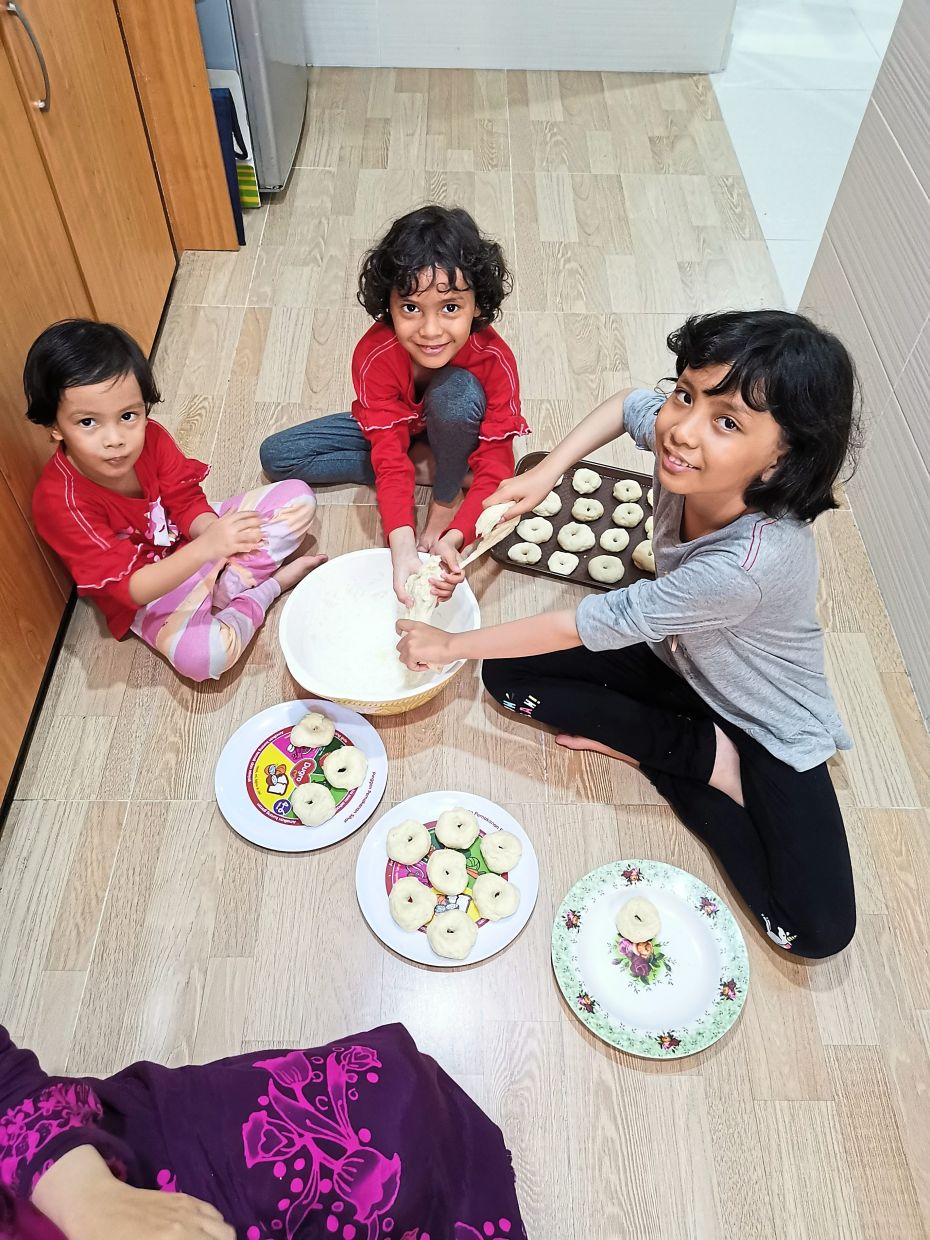 Other mothers have admitted that getting their children to assist in the kitchen can often result in more mess and chaos, which is why they have structured the means and methods that their children “help”.

“They do help with things like baking – they like to knead the dough for bread and make cookies, so these are things that keep them occupied. But when it comes to hardcore cooking, then no, they are not involved, because it’s a bit too annoying to have them around when I’m cooking and rushing meals, ” admits Anusha.

Incidentally, some of the home cooks confess that the MCO has even spurred their spouses to help out in the kitchen.

“Sometimes my husband looks at me and knows that I’m tired and he will just go into the kitchen and help me out. I’m quite surprised as it’s not something he will normally do, and this has only happened after 12 years of marriage!” exclaims Fathiyah.

Suhana’s children like watching her and helping her with simple tasks in the kitchen. — SUHANA ISHAK

Tan’s husband also helps her by doing the regular grocery shopping and occasionally taking over the kitchen himself.

“Sometimes he does the cooking, so I can relax. And other times, we make simple things together, like putting together a pizza, for instance, ” she says.

Others say their spouses may not be in the kitchen helping them, but they offer support in other ways.

“My husband knows how tiring it is doing the cooking, so he always helps me take care of the kids, so that I can get a break, ” says Odelia.

Ultimately though, all the home cooks are very happy that they are able to successfully feed their families during these difficult times.

“I always tell my kids that this is not the time to be fussy – we just need to be grateful for what we have. At the end of the day, I’m just happy that they are full, ” says Suhana. 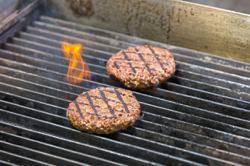