In her large, cavernous home in Ampang, Angie Tay is bustling about with purpose and determination. A charming, multi-talented woman with a smile at the ready for everyone, Tay is not known for sitting still and is constantly on the move, whether it’s to cut up a banana cake she’s just made or whip up some coffee.

The consummate hostess, she is also always eager to feed her guests. “Would you like to try some kombucha? I made it myself, ” she asks. And before you can even answer, she has hurried to the fridge to pour some of the promised kombucha into a glass as her family watches her fondly.

Tay’s enterprising spirit was probably gleaned from her parents. Her father reared ducks and chickens in their home and Tay says she grew up with meals fashioned out of the homegrown vegetables harvested from the family’s garden.

Tay has clearly inherited her parents’ green streak, as she too has a thriving vegetable garden, filled with pumpkin, ladies’ fingers, chillies, brinjal and all sorts of other vegetables and herbs. In fact, she rarely buys vegetables from the market now.

Interestingly, although Tay is now a talented farmer and home cook, she was nothing of the sort until she got married and set up home with her husband Yee Kong Fatt.

“When I was young, I didn’t know how to cook. When I got married in my twenties, my husband taught me how to cook rice and boil eggs, ” says Tay, laughing at the memory.

Since then, Tay has upped her cooking skills. She started by attending cooking classes, then began collecting cookbooks and recipes and has since become an incredibly accomplished home cook. 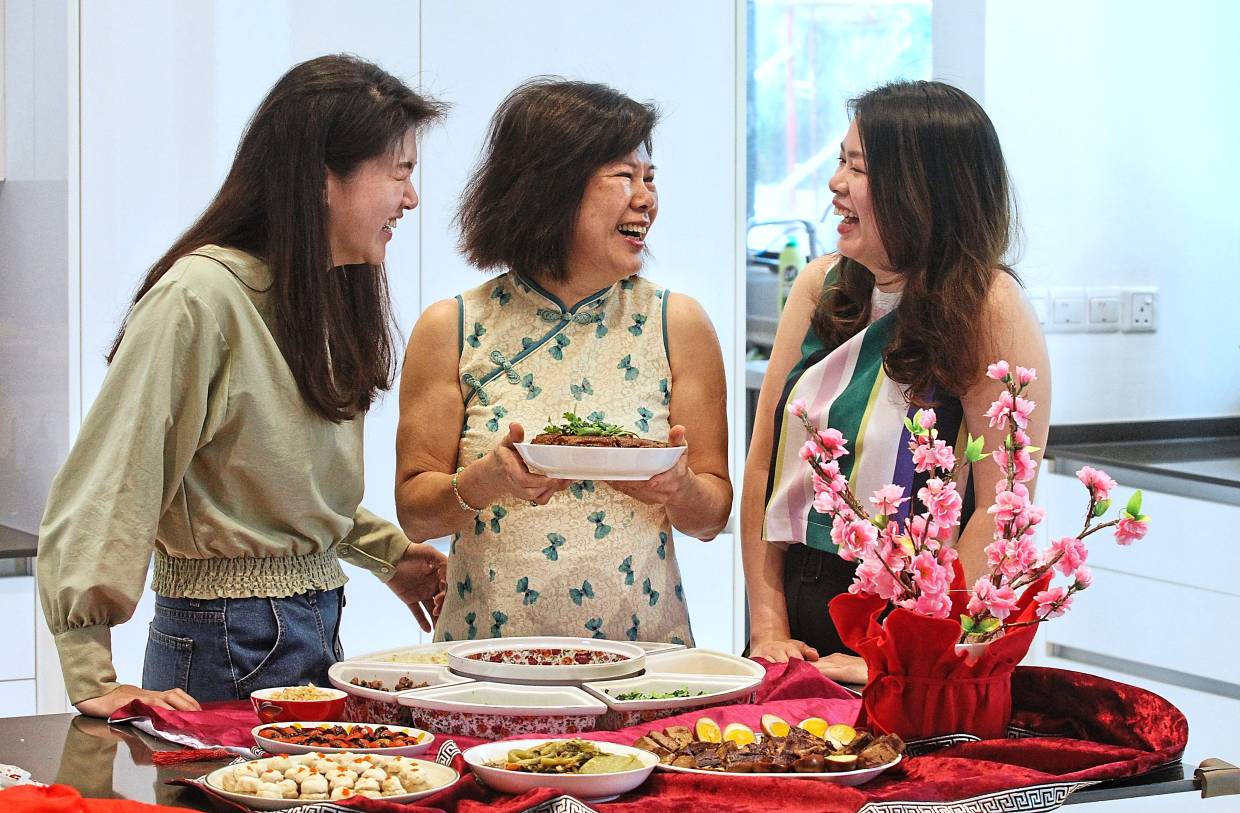 Tay (centre) says she has taught her daughters Sook Chuan (left) and Sook Fong how to cook all the family's heirloom recipes, so they typically help her prepare the CNY meals.

“She is always feeding us. She always tells us, ‘When you eat outside, don’t eat so much. But when you eat at home, eat as much as you want because my food is healthy and nutritious, ” says Tay’s youngest daughter Christine Yee Sook Chuan, laughing.

For Chinese New Year, Tay has taken on the mammoth task of feeding her large extended family (over 30 people) with the help of her daughters Sook Chuan and Sook Fong. On the second day of Chinese New Year, she also typically hosts a large Chinese New Year party, often inviting up to 200 people to her home.

“I have taught all my children these dishes, so whenever I cook, I ask them to come and help lah, ” she says.

Many of Tay’s recipes are Hakka staples and derived from the fact that her mother (who was Teochew) moved to Melaka where there was a large Hakka community and slowly learnt many of the community’s culinary staples.

Tay’s rui cha (also called lui cha or lei cha), for instance, is a wholesome Hakka dish made up of an assortment of fresh vegetables like long beans, corn and tofu as well as preserved vegetables like radish buoyed by a herbaceous homemade vivid green soup anchored with tea leaves, mint leaves and basil.

It is a delightful meal that sates and soothes in equal measure. It is also a recurring dish on Tay’s table come Chinese New Year (and throughout the year too).

“I learnt how to make this from my mother. She used to pound all the ingredients for the soup with a stick made out of guava wood until it was finely ground. She was very particular about that! My daughters and I used to help her do it, but now that I’m making it myself, I prefer to blend everything as it

saves so much time. Tay is an energetic hostess who typically cooks for up to 200 people every CNY.

“And it’s a vegetarian dish, so we normally eat it on the first day of CNY, when everyone has to be vegetarian, ” she says.

“Every year for CNY, we will definitely have this dish. My mother used to make either a roast duck or a braised duck but I only know how to do the braised duck. Every year, we only make it once, so sometimes the taste can change because I haven’t done it in so long!” says Tay.

After the reunion dinner, most Chinese families in Malaysia typically utilise all the leftover meat from various meals and cook this with mustard greens and tamarind on the second day of CNY, effectively creating a brand new dish, which is sometimes called assam mustard greens, kiam chai boey, chop suey and many other names – depending on the Chinese community that makes it.

Additionally, each family’s recipe is often unique – Tay’s version for instance, makes use of pork ribs and is a delicious, flavour-packed meal that lingers in the memory long after.“Everybody makes some version of this during Chinese New Year – it’s a good way to use up all the leftover meat. In my version, I always add baked beans – I find that it makes the base sauce tastier and creamier too, ” says Tay.

Ultimately, Tay says her Chinese New Year meals are a throwback to the days of her youth, which were rooted in tradition. And she feels that the only way to preserve this tradition is to continue making the food she grew up with.

“It’s good to recall the past when we’re celebrating the new year. So that’s why I always stick to these traditional dishes for Chinese New Year, ” says Tay. Wash and clean duck. Rub with salt and marinate for 30 minutes. Wash salt off and pat dry duck.

Heat the wok with some oil and fry shallots, garlic and ginger until fragrant.

Add duck to the wok and fry for a short while. Add the rest of the ingredients, except tofu and eggs and let reach a boiling point. Once boiled, reduce heat and leave to cook on low heat for 3 hours. Rotate duck a few times to ensure even braising.

At the 2-hour mark, add tofu and eggs to the wok. After 3 hours, remove duck from the wok. Cut duck into pieces.

Sieve the remaining ingredients in the wok, reserving only the sauce. Cook sauce over medium heat until it thickens. Pour sauce over duck and serve hot. In a pot, boil water and place all the ingredients for cooking first in the pot. Simmer for an hour on low heat. Discard pork bones and put in mustard greens, tomatoes and light soya sauce and simmer for 30 minutes.

Add baked beans and stir to mix in well. Cook for 5 minutes and remove from the heat. Serve hot. 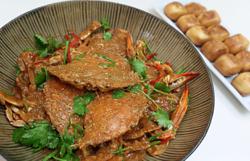 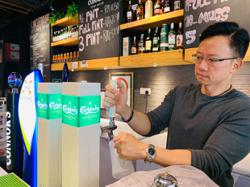 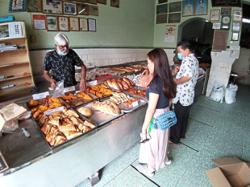