Inside Poison Apple. The collection of moving pictures, made possible with a photography technique that combines still images with short video clips of the same scene, are known to startle diners. — Photos: CHAN TAK KONG/The Star

REMEMBER the scene from Walt Disney’s Snow White and the Seven Dwarfs when the evil queen casts a spell on a red, juicy apple?

Now, let your imagination run loose by stepping into this witch’s lair with its bubbling cauldrons and magical potions.

That is how diners describe Poison Apple, a concept restaurant in Bandar Sunway where dishes are served shrouded in wisps of smoke with white fog spewing from tureens.

But behind the whimsy is a menu that thankfully, tastes nothing like the eye of toad or tongue of newt.

This East-meets-West savoury treat was created to go with beer, explained Caffeinees Group executive director June Chang, who ordered the brew to be served in seven little mugs, to put things in the mood.

For a heftier bite, there is the sourdough loaf, artfully shaped into a stone, complete with a paper sword sticking out from the middle representing King Arthur’s mythical steel.

We did not care much for the props but loved the fluffy crumb and baked mozzarella topping, especially the burnt, crisp parts.

Another cheese item here is the beef burger.

For the main courses, the Hakka-style fried rice served in a large beer mug gets our attention.

Topped with a layer of bright orange ebiko and deep-fried baby anchovies, buried within the rice are pan-fried scallops, easily located thanks to its transparent receptacle.

For want of drama, the lobster omelette fits the bill. Arriving in a claypot which has been heated on a stove for an hour and kept in an oven for warmth retention, the waitress flicked the lid open to pour in a “magic potion” over the 500g Canadian lobster.

The potion is actually a mixture of eggs, pepper, butter and lobster jus. The lid is then placed on for the “magic” to work. Heat from the pot cooks the egg to become a wobbly but silk-like jelly around the steamed lobster.

Szechuan pepper offers its potent touch to the menu.

The abundance of this fiery ingredient makes its presence felt in three dishes — spaghetti with either minced chicken or beef, smoked chicken and deep-fried crunchy chicken wings marinated with lemongrass, ginger and coffee powder.

At first bite, the tongue feels like it is on fire. On the second, third and subsequent intakes, the spiciness becomes addictive.

We were told that special attention is given to the smoked chicken.

Chang said together with her team, they tasted up to 34 different types of chicken before settling for a supplier which could keep the size of the free range birds to no more than one kg each.

Served on a wire mesh over lit cubes of benzoin, the dish arrives veiled in smoke under a glass lid.

The bird, we learn, is smoked for up to four hours with apple wood chips, then grilled under a salamander.

The menu also claims to serve unicorn’s leg! This is actually lamb shank in thick gravy spiced with (you guessed it...) more Szechuan pepper.

For an idea of its taste, think sup kambing but in more concentrated form.

To drink, there is Poison Apple Signature, a vodka cocktail with green apple syrup.

For a novel touch, diners get to conduct a chemistry experiment by combining calcium lactate with sodium alginate to create edible crystals.

The Snow White’s Potion comes in a glass vessel expelling white fog. This is another vodka cocktail with creme de cacao, enriched with coconut cream.

For something stronger, the set of seven vodka shots mixed with different types of syrups is recommended.

For the non-superstitious, the Witch’s Voodoo Cauldron is a cocktail of red wine with mixed berries, whipped cream and cocoa powder.

Served in a covered claypot, diners get to play a little game of chemistry again by pouring dry ice into the pot. Once the smoke runs out, the drink is ready. 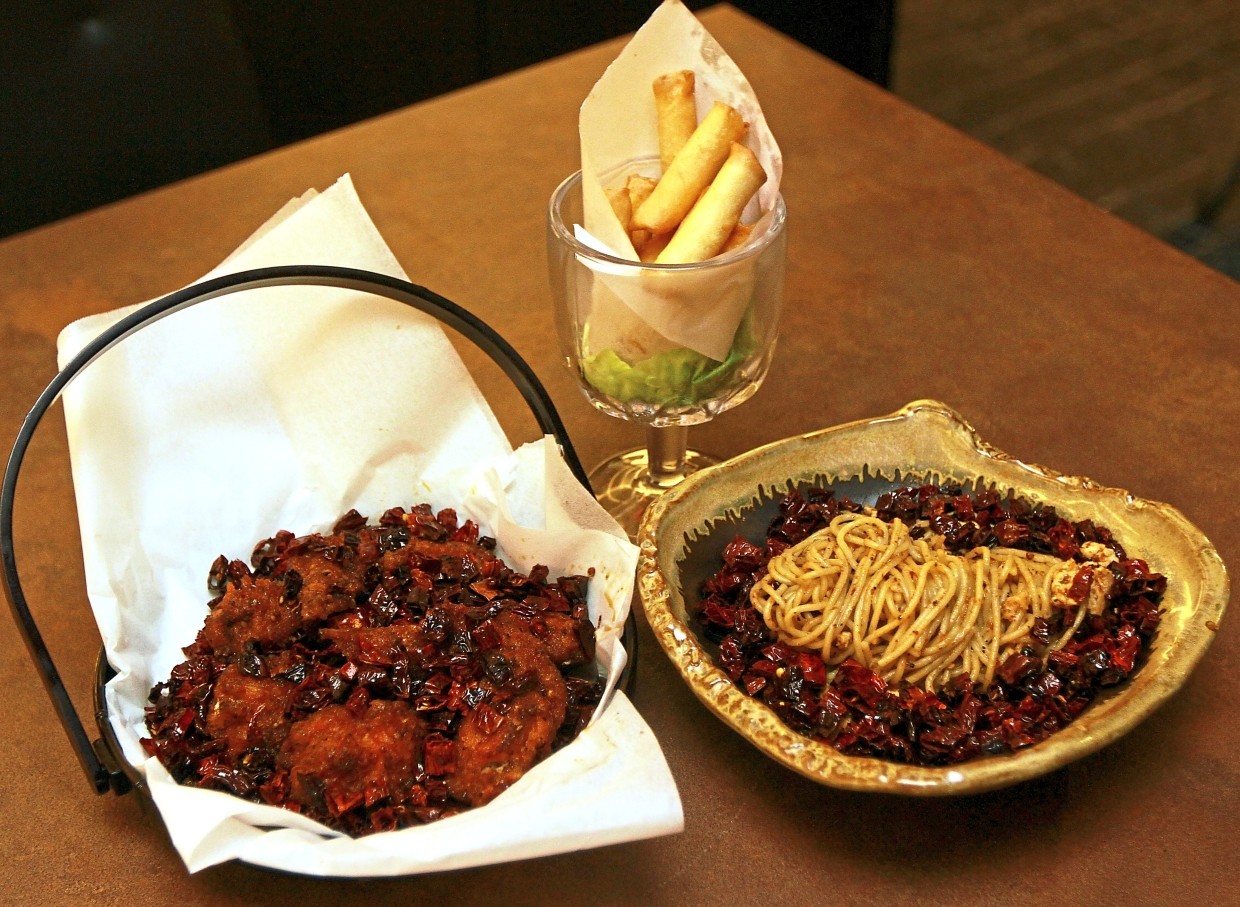 Inside Poison Apple. The collection of moving pictures, made possible with a photography technique that combines still images with short video clips of the same scene, are known to startle diners. — Photos: CHAN TAK KONG/The Star

Clockwise from left: Deep-fried, crunchy chicken wings marinated with lemongrass, ginger and coffee powder, popiah skin filled with mozzarella and spaghetti with either minced chicken or beef and lots of Szechuan pepper.

The lobster omelette at the Poison Apple.

Special attention is given to the smoked chicken, marinated in Szechuan pepper oil then smoked for four hours with apple wood chips.