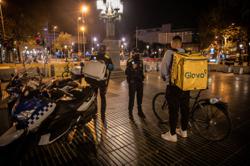 The cod fritters are little balls of delight that feature a crispy outer shield that yields to a tender interior filled with shredded cod fish. — Photos: SAM THAM/The Star

Ensconced on a second floor shoplot in The Hub is Little Pig. The eatery is small and cosy with a large open kitchen taking centre stage.

In the heart of this kitchen is Yong Yu Khim, the chef-owner of the establishment. Yong is a sweet personality with a shy, ready smile and a serious passion for cooking – he even has the words ‘Mise en place’ (which means the preparation required before cooking) tattooed on his arm!

Having spent nearly eight years learning his trade at renowned Singapore eateries like the two-Michelin starred Restaurant Andre (now shuttered), helmed by the eminent Andre Chiang and the now-defunct Guy Savoy (owned by the eponymous Guy Savoy who has a three-Michelin starred restaurant in Paris) as well as Spanish tapas joint FOC – Yong felt the time was ripe for him to strike out on his own. Yong trained at a number of top restaurants in Singapore before deciding to open his own eatery in Malaysia.

“I saw that Malaysia had a lack of Spanish tapas restaurants here in the Klang Valley, so I decided to come back and open a restaurant here. And I chose this spot in Petaling Jaya because most of the Spanish restaurants are located in central KL or Bangsar, so there are a lot of offerings there already, whereas we are one of very few Spanish eateries in PJ, ” says Yong.

At Little Pig, Yong has put together a menu that tips its hat to Spanish tapas but also alludes to his Asian roots.

“I kept some very traditional dishes, like small bites but of course I had to do some fusion with Chinese food, because Malaysia doesn’t have much Spanish cuisine, so there isn’t a lot of exposure to this kind of food. So I thought of bringing some Chinese and Japanese ingredients into the meals, ” says Yong. Yong’s take on potato bravas is both tasty and texturally satisfying.

Yong’s potato bravas (RM21) for instance, pivots from its origins in the sense that instead of deep-fried potato cubes, he has instead opted to stack thin slices of Spanish agria potatoes atop each other and deep-fry this layered concoction. The result is a thick potato plank that is crunchy on the outside but melds fluidly into a starchy-soft interior that is also delightfully light. The lightness is ingenious and evidently a result of the Yong’s carefully calibrated stacking methodology. The only thing missing here is a smidgen more salt.

Next up, make a move towards underwater channels with the Cod Fritters (RM15). Here, you’ll discover little deep-fried balls stuffed full of cod meat and elevated by a refreshing apple gel. Deep-fried food is one of life’s most sinful pleasures (Paula Deen would heartily concur) – and these cod fritters fulfill that hedonistic quality and then some. This is a meal that will separate your friends from your frenemies – because only a true friend would be able recognise both the glitter of greed in your eyes when you first bite into one of these plump little balls and simultaneously sense the invisible ‘Keep away’ sign signaling that this is a strictly no-sharing dish. Yong has also come up with some meals that feature Spanish ingredients built around Asian favourites. His signature dish of Crispy Pork Belly Eel Bao (RM34) for instance is made up of Spanish duroc pork belly and grilled eel sandwiched between a homemade bao that is topped with egg yolk gel. Everything in this meal makes total sense – the soft, doughy bao envelops melt-in-the-mouth pork belly that boasts hearty, meaty flavours. This richness is countenanced by the smoky umami notes of the eel which ties this dish together beautifully. It’s a clear winner, one that shines through like a shooting star on a cloudy night.

The Beef Cheek Bao (RM34) meanwhile is comprised of beef cheek braised in red wine and moulded together into a patty, with kimchi mayo to top it off. Although promising in theory, in reality, the meal is fairly pedestrian and doesn’t show the shine of brilliance that its other bao brother so deftly displays.

The Squid Ink Paella (RM40 for 2 pax) comes with a choice of either traditional paella or fideuo (short noodles) topped with clams, crispy pork belly and squid. The noodles work surprisingly well in this iteration and skillfully soak up all the squid ink, which in turn imbues each strand with rich aquatic flavours. The supporting cast of squid, clams and pork belly also deserve a round applause as each plays it part well and ultimately, add texture and dimension to the meal. The roasted cauliflower pays tribute to the cruciferous vegetable’s natural attributes while elevating it with additional elements.

If you’re after something from the vegetable persuasion, try the Roasted Cauliflower (RM26). The big hunk of cauliflower has been slow-roasted and is enhanced with pippara peppers and Manchego cheese with a homemade Romesco sauce rounding out this cast of characters. The cauliflower is sublime – perfectly roasted with a tender core that still boasts a firm bite.

Pay tribute to the restaurant’s name with a hunk of pork in the form of the Pork Jowl Iberica (RM50) which features pork jowl marinated with cumin, coriander, sesame seeds, pistachio, hazelnut and almond flakes served with a burnt apple puree and pickled apple. The grillled meat is revelatory – the richness of each fat-riddled slice is offset by the toasted spice crust layered atop which imbues it with richly-flavoured Asian nuances that take up a pleasurable permanent residence on the palate. The spice crust atop the pork jowl adds a lovely complexity to the overall meal.

End your meal on a sweet note with the astonishingly realistic Mini Burger & Fries (RM20). Designed to resemble the real deal, the dessert is made up of elements like white chocolate, Valrhona chocolate mousse, passion fruit, strawberries and mint leaves. It’s a fun, irreverent dessert that ticks all the right boxes on both the looks and taste front and is likely to quickly become an Instagram star.

Although Yong is clearly enjoying stamping his own mark at Little Pig – like many young chefs – he feels that one restaurant simply isn’t enough to flex his creative muscles, which is why he says that moving forward, he is hoping to open another outlet focusing on modern Chinese food. The mini burger and fries captures the shapes and shades of the classic meal, all while providing sweet decadence.

“Yeah, it will probably be like a Chinese tapas place, featuring contemporary Chinese dishes. There are a few restaurants doing this, but my approach will also focus on the environment and the vibe. It’s going to be a more funky, fun place for hipsters, ” he says with conviction. Little Pig Lot B1-06, The Hub SS2

Open Wednesday to Monday: noon to 3pm; 6pm to 10pm Interested in cooking? Download Kuali app to get more recipes at your fingertips.