FOR fans of modern European fare, Skillet At 163 is more of a familiar face than a fresh one.

But coming off a two-month long renovation, the four-year-old restaurant has emerged with a completely new outlook, complemented by updated fittings and furniture, a new glass encased outdoor eating area and a menu that is striving hard to focus on regional European cuisine.

The restaurant is helmed by seasoned chef Raymond Tham who worked in Europe for 10 years and had a stint as a chocolatier before coming back to Kuala Lumpur.

“We still do seasonal produce and menus inspired by the seasons but we are now drawing inspiration from different parts of the region. Previously, we didn’t do so much of that, ” says Tham. 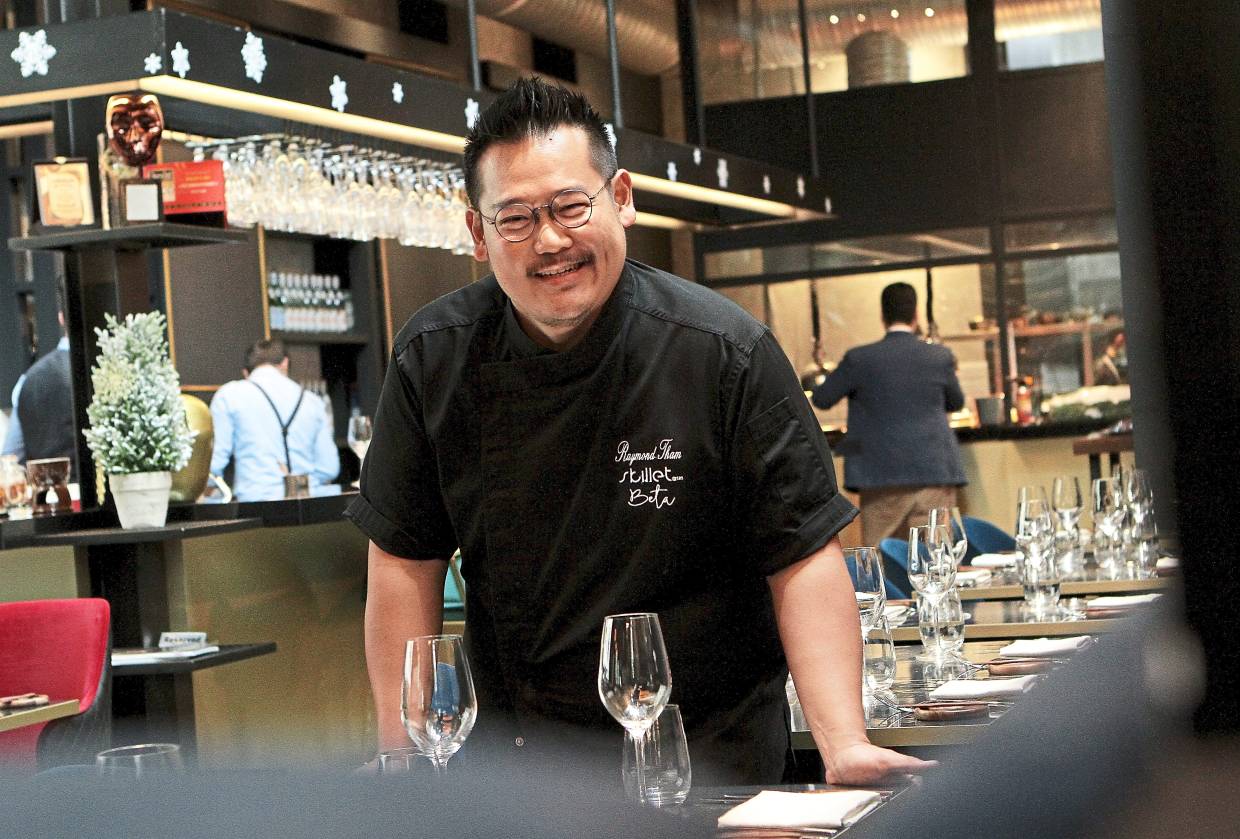 Tham is the man behind the creative creations at Skillet.

Tham and his team spent months working on the new autumn/winter menu, including researching, replicating and tweaking dishes that Tham had never tried before.

“I haven’t been to all of Europe, especially eastern Europe, so I needed to study what they do and try and cook it the classic way then only try and do it our way and give it a modern twist, ” says Tham. The duck prosciutto is made up of home-cured 150-day-old Bidor duck.

If you’re opting for the three-course menu, treats to look out for include the appetiser of duck prosciutto, which is essentially Bidor duck that has been home-cured for 150 days and complemented with endive, walnut croquant, 25-year-old aged balsamic vinegar from Giuseppe Giusti in Modena, Italy (that dates back to 1605) and orange marmalade.

The home-cured duck marks Tham’s first attempt at curing his own poultry and boy, is it good! The duck has a rich, almost smoky quality to it while the balsamic vinegar provides a potent astringency that melds well in this amalgamation. 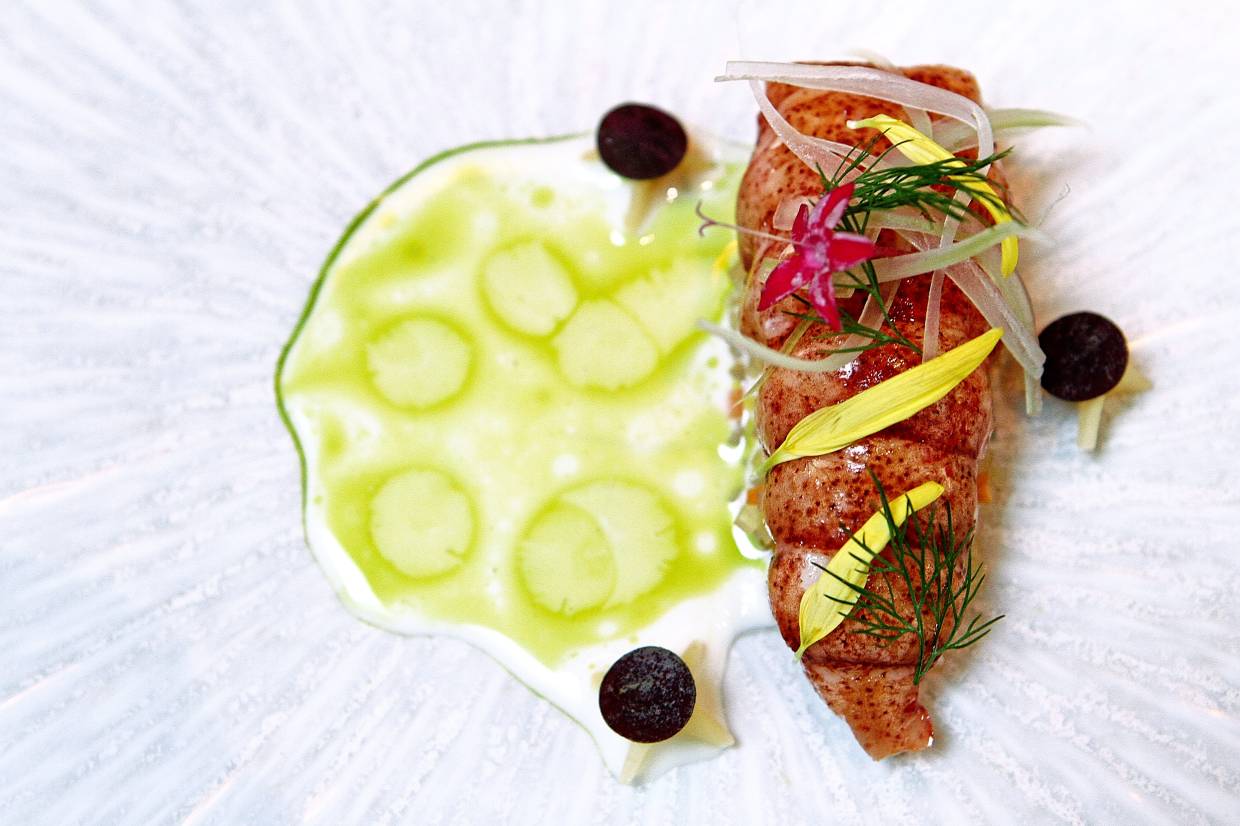 The star of this dish is the lobster, which is plump and packed with flavour.

The lobster (which requires a RM55 top-up) is made up of butter poached lobster with celery, rutabaga, apple and seaweed oil. Although it may sound fairly simple, nothing at Skillet ever is, as Tham is devoted to his art and works hard to extract flavours from various components.

“The inspiration for this dish comes from the Nordic region, so there is a small little dumpling made from rutabaga and then there is mascarpone cheese, poached Canadian lobster and underneath that is pickled apple and celery, and a fish broth embellished with fermented apple. And to increase the umami flavour, we make our own seaweed oil, ” explains Tham carefully.

The work that has gone into this carefully constructed meal is evident from the get-go – each bite offers firm, plump mouthfuls of perfectly cooked lobster juxtaposed against a backdrop of invigorating apple notes and lightly nuanced umami brushstrokes coalescing in the mouth. 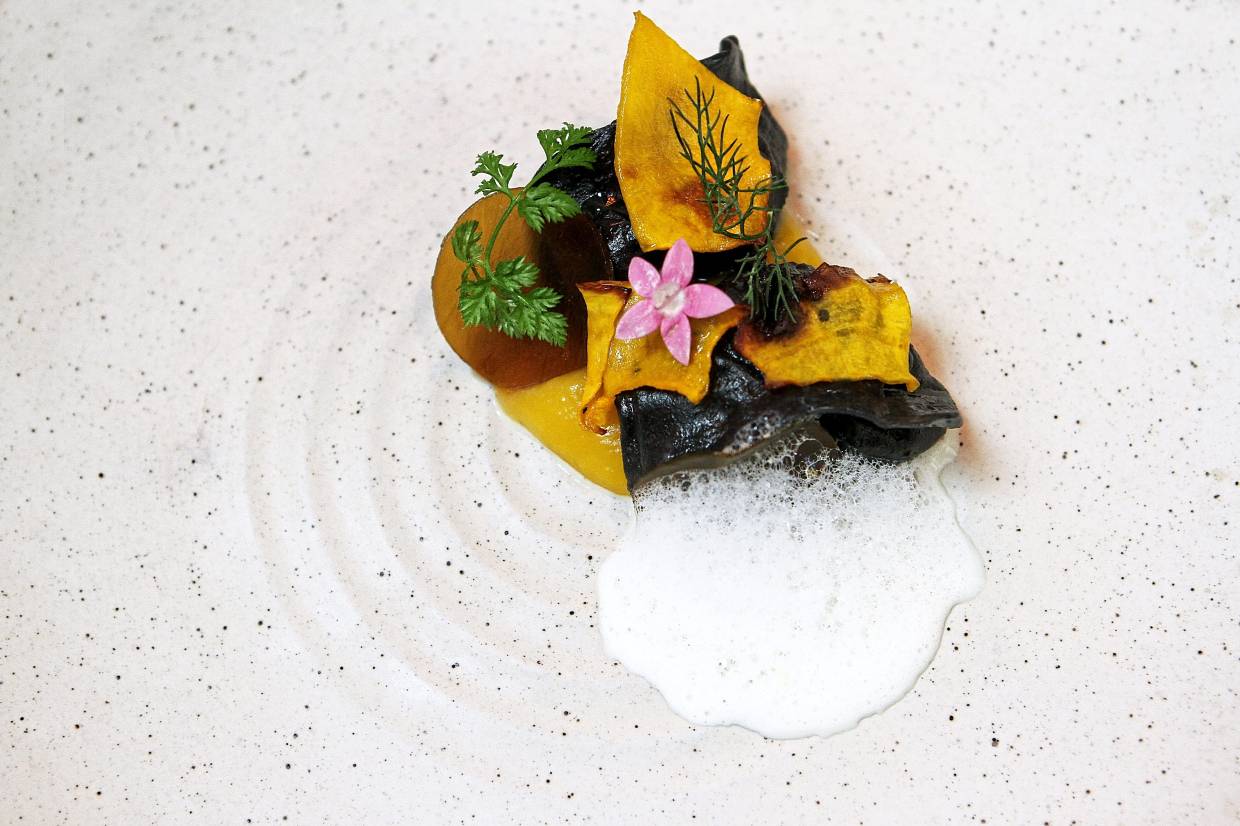 The pierogi is a take on the eastern European dumpling so popular in countries like Poland.

The pierogi with pumpkin and brown butter is another stand-out. Inspired by the eastern European dumplings so popular in countries like Poland, this version is stuffed with mushrooms and mock meat.

On the side is a pumpkin puree and roasted pumpkin as well as pickled seaweed. Interestingly, the foam next to this entire concoction is made from cheese rind soaked in milk.

The dumpling is a comforting little ball – the mock meat does a good job of replicating the meat component, while the pumpkin puree and roast pumpkin offer lots of sweet, vegetal touches. The brown butter in this concoction serves to accentuate the overall dish with rich, sensual flavours. 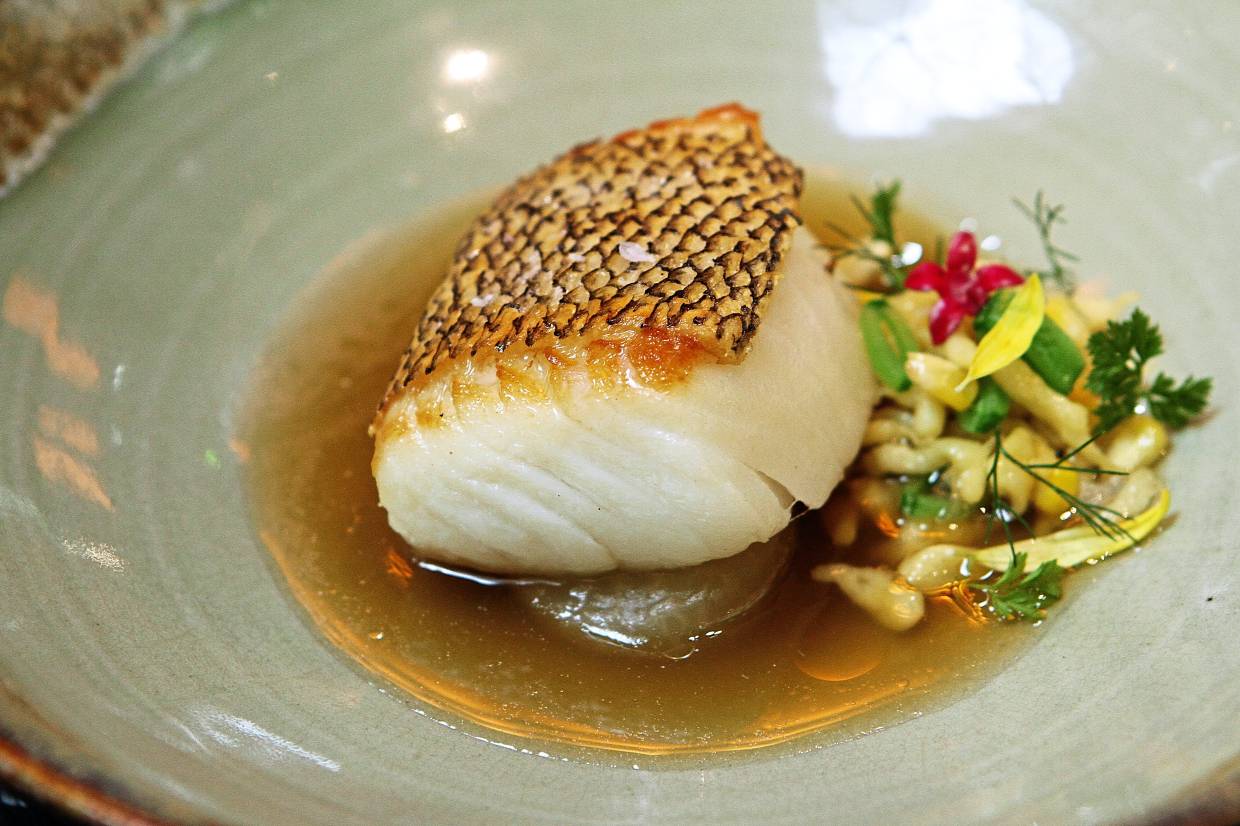 The cod fish dish is light and very, very rewarding on the taste front.

From the main courses on offer, you could opt to try the cod fish (RM70++ top-up required). The pan-seared fish is replete with side kicks in the form of homemade German egg noodles (called spatzle), braised white radish and an umami broth, fashioned out of fish bones cooked into a soup then frozen and finally filtered (the liquid slowly drips down) over two days to extract a clear liquid.

The result is perfectly cooked fish with delightfully crisp skin and meat that flakes easily at the slightest provocation. The broth meanwhile is a thing of beauty – light, with an almost unadorned quality to it that is reminiscent of the best sort of homemade soups.

Diners with carnivorous leanings could also opt for the venison pithivier with mushroom duxelles and betel leaf (daun kaduk), which is complemented by chargrilled Brussel sprouts and cranberries that have been fermenting since 2015 (another one of Tham’s many inventive streaks).

The pithivier (essential a puff pastry parcel) is brought to the table whole and cut to reveal the marvellous pink venison inside. After this, a jus is poured over the entire concoction.

The pastry here is excellent, suitably flaky with an inner core that is malleable. The venison on the other hand, is pretty good but perhaps a tad drier than you might like it to be. 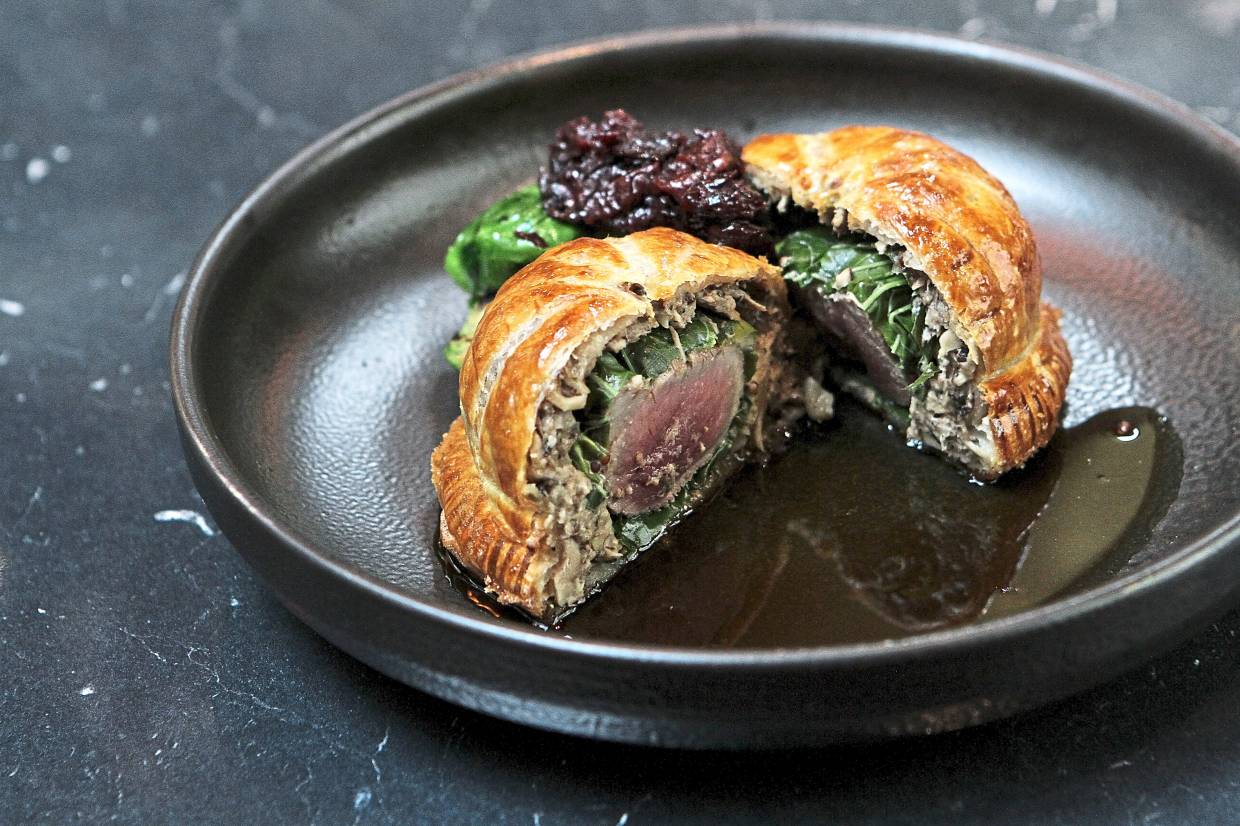 The venison pithivier features delightful pastry but the venison itself is a tad dry.

An element of theatrics is on display here, as liquid nitrogen is poured over the dessert, which in turn causes the contents of the chocolate orb to split open, revealing the butternut squash popcorn and a pool of melted chocolate. The highlight of this seductive dessert is definitely the chocolate, which is smooth and chocolate-y with delicious bitter undertones.

Moving forward, Tham says he is looking at steering Skillet forward to new heights, something he hopes to do by sticking to his guns and not following the crowd.

“If you believe in something, just stick with that. I don’t follow trends because it’s not something I want to do, ” he says.