Szechuan cuisine with a Japanese touch

Ensconced in a converted bungalow along a quiet road just off Kuala Lumpur’s busy Jalan Yap Kwan Seng stretch is The 19th Suzuki Hanten, a charming little eatery, if ever there was one.

The walls are plastered with images of early 20th century Chinese women, while mod-ish lanterns hang from the ceiling and striking red booths add to the distinctly Oriental feel.

The restaurant is owned by Doka Sdn Bhd, whose main dealings are in sake and Japanese rice. The company has two other eateries under its belt. Takemura trained under celebrated Iron Chef Chen Kenichi in Japan and is now making his mark in Kuala Lumpur.

Perhaps what makes the restaurant so distinct from any of its competitors is that while it specialises primarily in Szechuan cuisine, the master chef cooking up these Chinese meals – Shotaro Takemura – Japanese.

Takemura spent 15 years working under the auspices of the renowned Chen Kenichi in Japan. Kenichi’s father, the late Chen Kenmin opened the acclaimed Shishen Hanten restaurant in 1958 in Yokohama, Japan and is widely considered to be the progenitor of Szechuan cuisine there.

Kenichi himself is something of a superstar in Japan, as he was the longest-serving celebrity chef on the popular Iron Chef television show in the country.

“Chef Kenichi taught me to cook with love, so that’s how I cook all my food – with a lot of love, ” says Takemura, in describing his sensei’s approach to food. A thick, luscious vinegar-laced sauce coats every conceivable surface of the chicken, giving way to a delightful meal.

At the 19th Suzuki Hanten, Takemura has crafted a menu that pays homage to his Szechuan training while also endearing itself to the Malaysian market. Before the restaurant opened, he spent months adjusting and modifying his recipes and doing tasting upon tasting to get feedback from local consumers.

“I have adjusted flavours based on Malaysian customers’ needs but I still have to keep my standards high, so attaining this balance has been difficult, ” admits Takemura.

To attract a larger demographic of customers, the restaurant is pork-free although some dishes may incorporate alcohol in them.

Do note also that most of the “spicy” meals here are not really spicy, or at least nothing like the mala (tongue-numbing) Szechuan cuisine you might have experienced elsewhere. Meals are also distinctly less oily than traditional Szechuan iterations.

“He made it less Szechuan – if you have been to Szechuan, you know how spicy it is – it’s hard to eat, so he adjusted it a bit. The spiciness here is the same as in Japan, because Japanese people don’t like things too oily or with too strong flavours, ” says Yukiko Ushiyama, who does the restaurant’s business development and design.

Start your meal here with an appetiser in the form of the cold sliced jellyfish (RM15) with pomegranate and vinegar. The jellyfish is as cold as advertised with an appealingly wobbly texture. The vinegar in the mixture is potent but in a very pleasant way, adding a sour-ish element that serves to invigorate the senses. 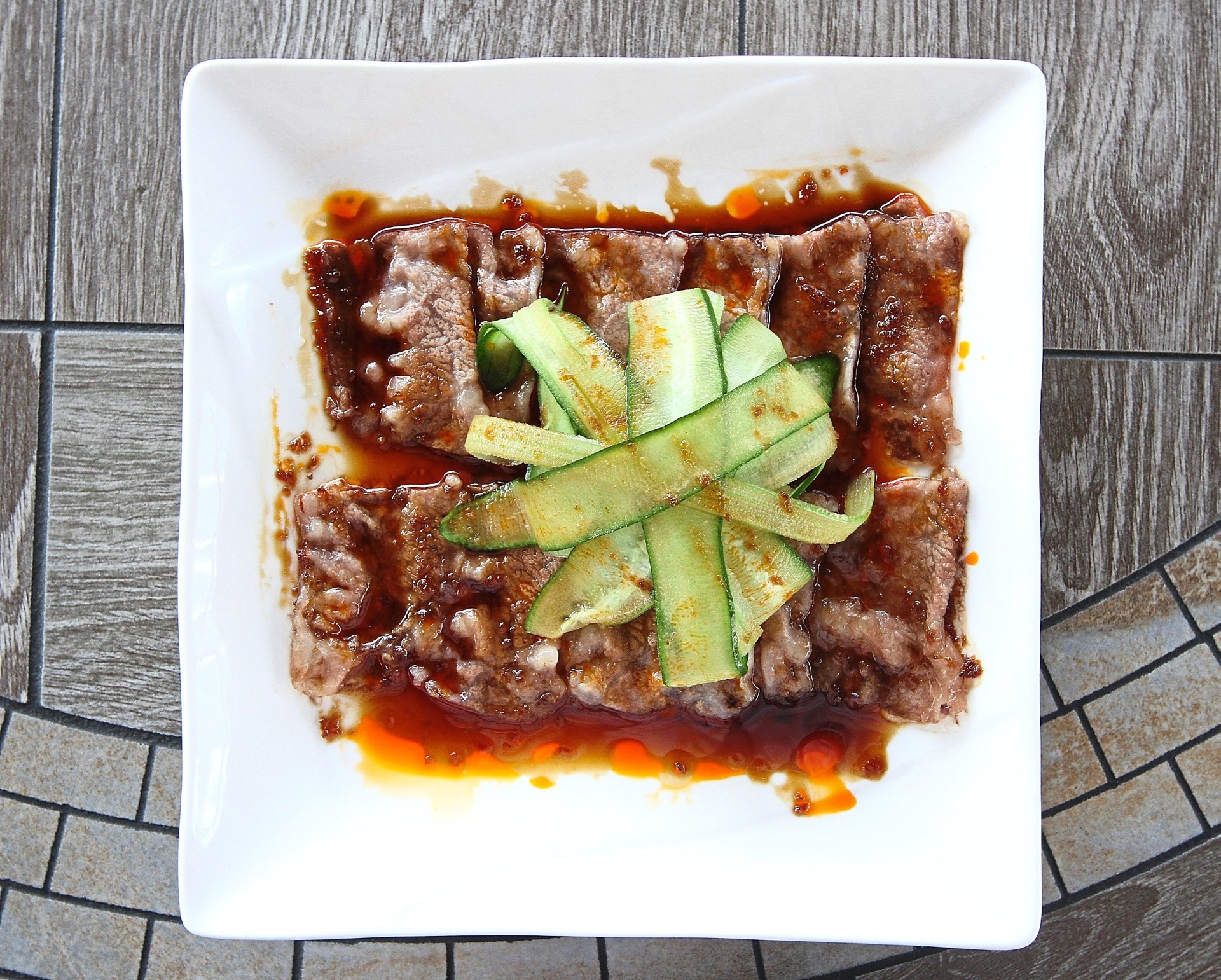 Up next, sample the grilled beef with spicy garlic (RM45). The beef here is silken soft and has a phenomenal melt-in-the-mouth quality, in the sense that it quite literally dissolves in the mouth. The spicy garlic lurking in the background adds dimension to the meat and overall, you’ll find yourself hard-pressed to find the willpower to stop eating more of this.

The cold steamed chicken (RM25) is available in three flavour options, of which the special spicy flavour really stands out. The chicken is incredibly tender and malleable and coated in a sauce that has both hints of fire as well as a very vivacious quality to it.

Then there is the stir-fried chicken with spicy black vinegar (RM35) which makes use of white vinegar, black vinegar and balsamic vinegar which is cooked down until it has thickened. The end result is nothing short of divine – the chicken is plump and juicy and slathered in a sauce that has a rich, decadent quality with a sour-ish vein running through its core. It’s the sort of meal you’re likely to fall in love with upon first bite.

The stir-fried wagyu with green pepper (RM69) meanwhile is an unpretentious, pared-down offering that features strips of wagyu beef interspersed with Japanese green pepper in what proves to be a simple pairing with lots of flavour on offer.

Up next, have a go at the stir-fried prawn with Chinese black beans (RM36). While all the components in this amalgamation are quite good, there is nothing very memorable about the dish, certainly nothing that will compel you to make a repeat order. After a lot of modification and adjustment, Takemura was able to come up with a version of mapo tofu that he was satisfied with.

The mapo tofu (RM31) is Takemura’s pride and joy, as he tweaked and twisted it, eliminating the pork that typically accompanies the dish in favour of beef (ironically the original recipe for mapo tofu calls for beef) and revising the recipe until he was satisfied with the end result. The tofu here is really very good, although probably nothing like the mapo tofu you might have tried elsewhere – this version is light and very balanced, the tofu is velvety soft and the sauce that coats it is a fiery red. It is incredibly easy to eat and has very nourishing properties.

Ultimately, a meal at the 19th Suzuki Hanten is likely to be completely alien to any other Szechuan experience you might have had elsewhere. The meals are lighter and significantly less spicy, but flavour has not been compromised in pursuit of this new gastronomic discovery.

“I think what is very different from other restaurants and what our Malaysian customers have said is that it is a modernised version of Szechuan cuisine, which everyone will slowly accept, ” says restaurant manager Jonathan Yong.