In the spotlight: Ng says the popularity of bean-to-bar brands has also increased interest in chocolate-making.

ALMOST everyone would have grown up with some happy moments that involve chocolates.

The sweet indulgence has long been known to bring cheer and comfort to people.

However, not as many are bothered with the origins of this sweet treat that most of us continue to enjoy today.

In recent years, artisanal chocolate brands have appeared in specialty boutiques, online stores and pop-up shops, each trying to tell a meaningful story of their source material and brand that would hopefully win them more customers.

This has led to a renewed interest in cacao and its many unique characteristics and applications that have yet to be fully explored. 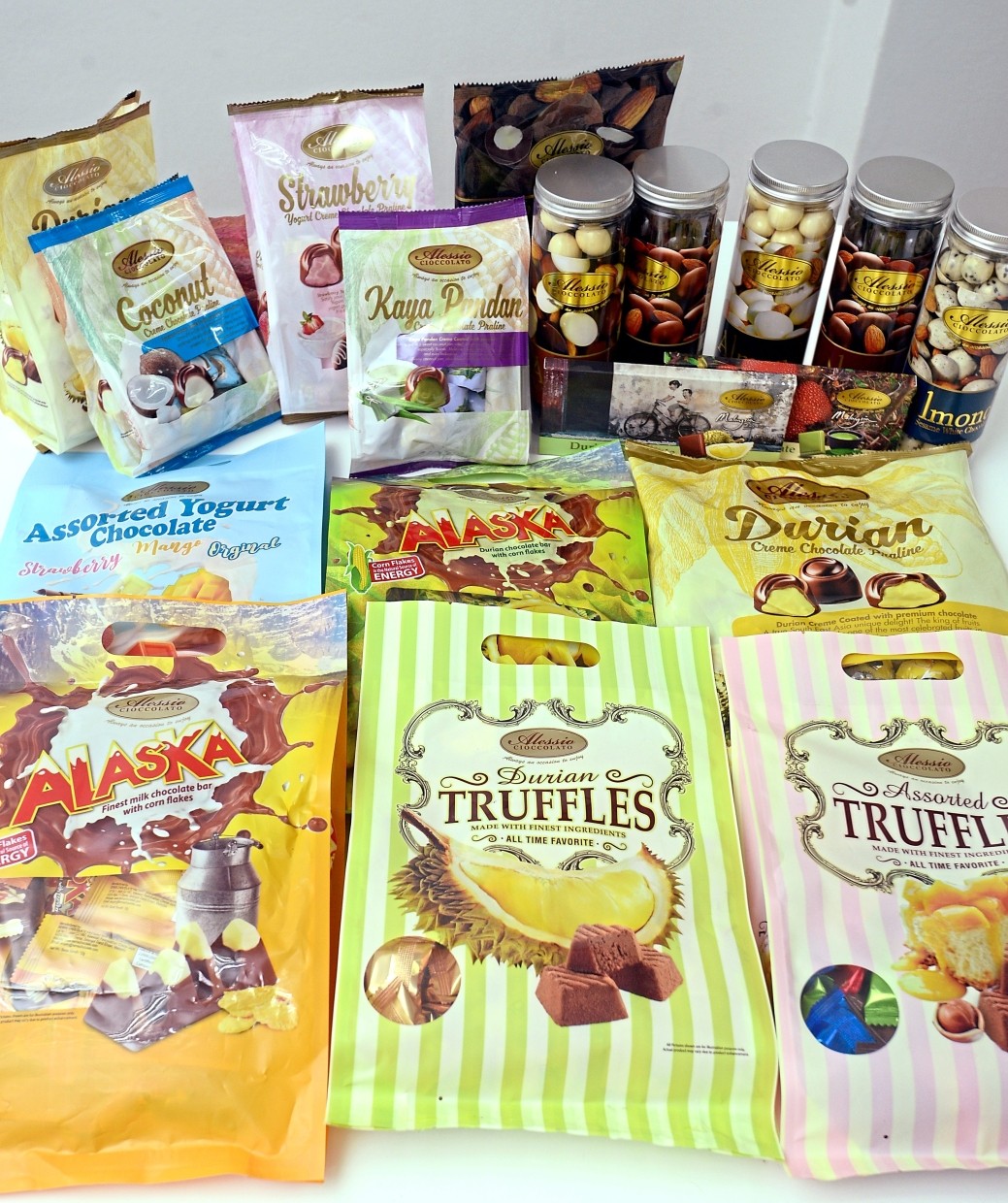 Varied offering: Benns produces a variety of products to meet the needs of different market segments.

Local chocolate maker Benns Chocolate & Candy Manufacturer Sdn Bhd is riding on this wave, joining the troop of artisanal brands hoping to educate the market on a healthier and more sustainable option of chocolates.

Executive director Wilfred Ng says the company is moving beyond the conventional mass market for chocolates and candies to build a new high-end local chocolate brand.

The company, founded by Ng’s father, has been around for a few decades.

But about two and a half years ago, Ng embarked on a new project to take Benns to a new level with high-end cocoa products that aim to promote the unique taste of Asian cocoa.

The manufacturer positioned itself as a single origin bean-to-bar cacao product brand, ensuring that it controls the entire process of its chocolate products from sourcing of the beans right up to retail.

Its branding strategy revolves around promoting the farms and farmers from whom they source their materials, as well as the history of the places where the estates are located. 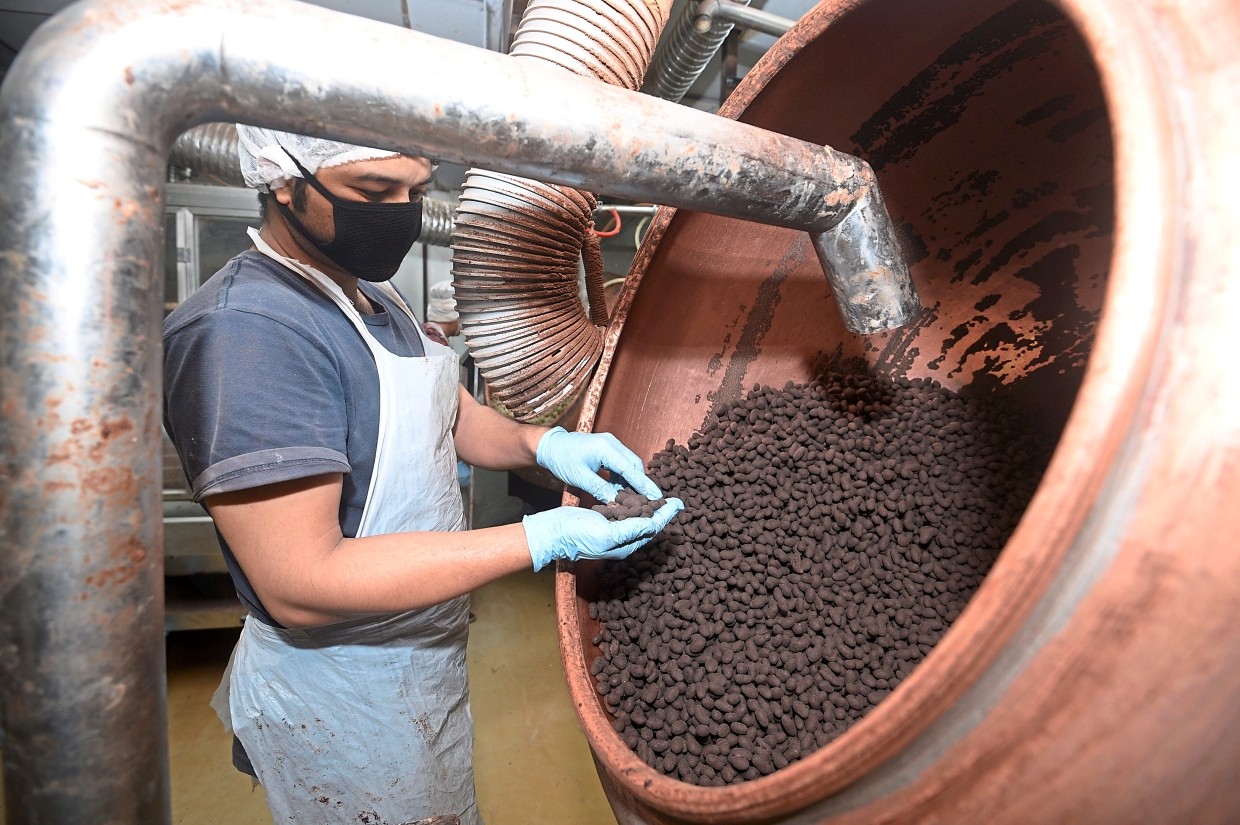 Increasing output: Benns's new facility will have the capacity to produce up to 500kg of high quality chocolate per day.

Benns’s model enables them to cut out the middleman by working directly with farmers who are often underpaid.

Its beans are sourced within Asia, particularly from cacao growing countries such as Vietnam, the Philippines, India and Malaysia.

Benns also produces cacao nibs and cacao teas. Ng explains that cacao tea, drunk since ancient Mayan times in South America, is said to be the purest form of cacao consumption and has the potential to be a unique product line for the company.

Cacao beans from Asia are largely underappreciated, says Ng. On the other hand, the high-end chocolate market is dominated by European and American brands.

A vast majority of cacao beans produced are currently sold to major manufacturers which produces commercial chocolates, leaving a large gap in the production of high-end chocolates from good quality Asian beans, he adds. 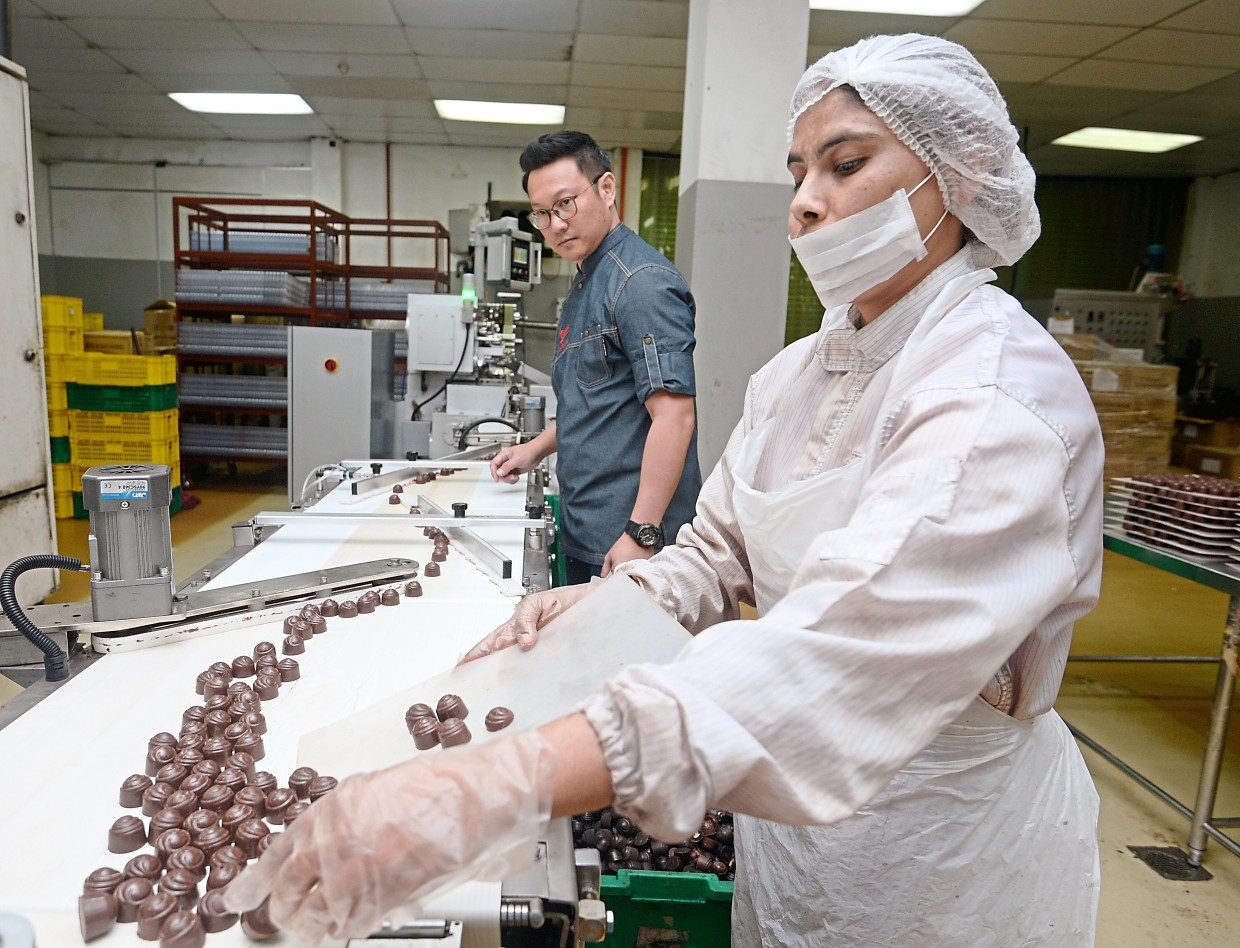 Sharing experiences: The company hopes to showcase more on its chocolate production processes to the public.

Benns’s products are currently retailed under the Benns brand and stocked at upmarket retail and supermarkets in Malaysia and Singapore. They are also available at its online store.

With recognition for artisanal brands growing, Benns is currently constructing a new manufacturing facility next to its existing plant that will be dedicated to its Benns range of products.

The current manufacturing plant produces around 100 tonnes of chocolate per month, including for third-party brands.

The new facility will have the capacity to produce up to 500kg of high quality chocolate per day, with areas designed to showcase to the public the entire history of chocolate production as well as the processes involved in making bean-to-bar chocolates.

Just like craft beer or speciality coffee, artisanal chocolates are crafted from unique tasting and high-quality cocoa beans from Latin American, Africa and Asia. The market for these products is growing in tandem with better standards of living and changing consumer trends, says Ng.

Consumers are increasingly developing an affinity for a more diverse taste in chocolate. As such, profiles such as bitterness, richness and complexity have become hallmark characteristics for certain global chocolate brands.

On the other hand, brands that cater more to the Asian palate, including Japanese consumers, tend to gravitate towards chocolates that are milky, caramel-infused and soft-textured.

These, says Ng, are few and far between, which gives Benns room to grow in this segment. “Everyone wants to eat chocolates, but many are reluctant to indulge in it because they think it is unhealthy and fattening, ” he says.

The company has three main product lines, comprising Alessio, which caters to the mass market, Gulliver, its mid-market range, and Benns.

The Alessio range currently contributes more than 70% of the group’s total revenue.

Cacao, which originates from South America, are raw seeds which can be cold pressed and eaten as a form of chocolate. However, most cacao seeds are roasted and ground to make cocoa powder, from which chocolate products are made.

Each cacao producing region has its own distinctive flavour profile.

For example, according to Benns’s website, most of its cacao sourced in South-East Asia have a fruity note.

Looking to increase the awareness and appreciation for cocoa from Asia, Ng says Benns is looking at foreign strategic partnerships to bring its chocolates out.

“Because the technology of chocolate making is now more accessible, we are now able to make use of our own cacao beans to make our own chocolate brands, ” he adds.

The Asian market for chocolate confectionery has grown by a compounded annual rate of 5% in five years, as regional economies and populations expand, according to Euromonitor International.

Malaysia has more than 50 chocolate manufacturers and confectioneries and 194 local chocolate producers, with export value of about RM1.1bil last year from RM868mil in 2017, Ng says. 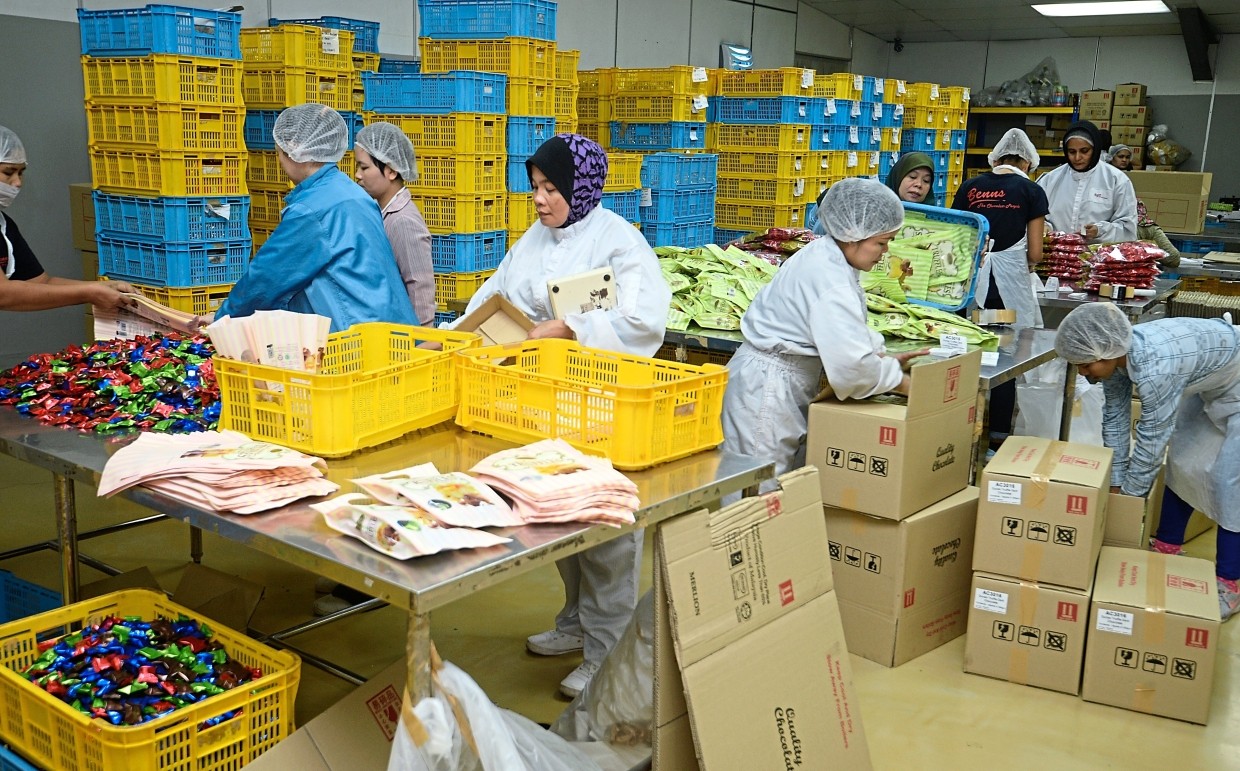 Still a hub: Malaysia has been the choice location for chocolate producers to set up their manufacturing hub.

By 2020, Asia is expected to be the world’s largest market for cocoa powder, used in products including cookies, chocolate drinks and ice cream, he adds.

Additionally, the popularity of bean-to-bar brands has also increased interest in chocolate-making.

It is no coincidence that leading global chocolate and cocoa product players such as Nestle, Barry Callebaut, Mondelez and Hershey’s have made Malaysia their hub for manufacturing operations.

One of the main differentiation factors that sets Benns apart in the market is its commitment to help improve the livelihoods of cocoa-growing communities by equipping them with the know-how of proper farming techniques so that they are better able to manage their farms and their livelihoods in a professional and sustainable manner.

“We pay high premiums of around US$7 to US$8 per kg to the farmers for their beans, much higher than the current market rate of around US$3 per kg, ” shares Ng.

The quest by Benns to promote Asian origin chocolate has been in the making for almost 50 years, when senior Ng became one of the first few non-Europeans to start a chocolate confectionery business in 1973 in Singapore. He moved the operation to Malaysia in the early 1980s, leading to the birth of Benns over the next decade.

Ng’s father, who started the company in 1999, remains the controlling shareholder of the firm and still plays an advisory role at the age of 85.

Now the second-generation Ng is writing a new chapter that focuses on elevating the experience of chocolate-making in Benns’ ongoing chocolate journey.

It aims to continue building its brand name besides capturing the new markets with the revival in demand from consumers, especially in Asia who are driving the growth in the chocolate industry. It is looking at mature markets to sell its high-end chocolates to including Japan, Europe and North America to promote Asian origin cacao-based products.

“The cocoa value chain can be significant in providing a clearer picture of the current operation of the cocoa industry in Malaysia and help identify the opportunity for upgrading as we become the major producer of chocolate products, ” he says.

Apart from its own chocolate products and contract manufacturing for other brands, Ng says Benns is also looking at expanding its cocoa-based products to cover chocolate powders and cacao butter as the raw materials for soap and beauty products.

“Most high end cosmetics use cacao butter as one of the main ingredients, and this is one of the areas we are planning to explore, ” he says.

Can cocoa regain its shine?