Lesson learned: Wan Mohd made some expensive mistakes in his early days before he refocused and found his footing.

WHEN businesses become so secure in their success that they fail to innovate, the consequences can be fatal – think former industry leaders like Nokia and Kodak.

It was also a lesson that Wan Mohd Azizul Solehin learned on the day he tried to sell cooking spices at Kelantan’s most popular market.

His family business Pasir Pekan Haji Halim Catering was one of Kelantan’s top two caterers, renowned for its signature gulai. In 2012, the family decided to expand their range by selling the spice blends used in their dishes.

That morning, armed with 200 sachets of spice blends, Wan Mohd walked into Pasar Siti Khadijah confident that his products would sell like hot cakes.

He was in for a shock. He sold less than ten sachets the whole day; customers preferred the cheaper products sold by other traders at the market.

Worse still, the name “Haji Halim” elicited blank stares from most passers-by. The few who did recognise the name exclaimed, “Oh yes, my parents and grandparents used to hire them as caterers for weddings. Masih ada ke? (Is the company still around?)”

“At that moment, it hit me that we’d been in our comfort zone for too long. Our competitors were overtaking us and we didn’t even realise it, ” says Wan Mohd.

Thus began Wan Mohd’s mission to transform Haji Halim from a business that catered exclusively to the local market into a brand with national – and possibly international – reach through new channels. Wan Mohd was initially driven by the desire to honour his late mother Ruhani and her efforts in growing the company, but this gradually evolved into a wider call to put his home state on the culinary map.

Pasir Pekan Haji Halim Catering started in 1980 as a humble caterer in Pasir Pekan, a small town between Kota Bharu and Tumpat. While the recipe formulations are credited to founder Haji Halim, the catering business truly flourished under his daughter Ruhani.

After taking over the reins as a teenager, she grew the business into a successful enterprise that could feed four families.

As Ruhani’s only child, Wan Mohd was naturally asked if he would like to join the family business someday. The young boy had his heart set on electronics and Ruhani didn’t push the issue. Wan Mohd’s exposure as an engineer in a multinational corporation took him places and exposed him to other business concepts, one of which was to diversify the business to ensure sustainable growth.

This was how the idea of selling its spice blends under the Rempah Haji Halim brand came about.

Although the trial run at Pasar Siti Khadijah didn’t work out, Wan Mohd was undeterred. He took their products out of Kota Bahru and stocked them in sundry shops and neighbourhood markets at nearby towns like Pasir Mas and Tumpat.

To familiarise people with Rempah Haji Halim, he put up buntings and distributed brochures with recipes.

“Each brochure cost me 20 sen but as a new player, I knew I needed maximum marketing support to penetrate the market, ” he shares.

Just when things seemed to be getting back on track, an unexpected tragedy changed everything. In February 2016, Ruhani suffered a stroke.

The dangers of concentrating critical business information in one core person became painfully obvious. While Wan Mohd was tending to his mother in the hospital, Ruhani asked for her black book where she had started documenting recipes. But it was too late.

“My mother was so weak she couldn’t speak properly. Some of our most prized recipes, like kambing kukus, are lost. We have the rempah but nobody knows how to cook the dish.”

Ruhani passed away two weeks later at the age of 54. A lesson in prudence

He uprooted his wife and two young children from Kuala Lumpur and moved back to Kota Bharu.

Adjustment was tough without his mother. The task of preparing the spices was now left to him.

“Some of the rempah were easy to blend, a matter of mixing the various dry ingredients together. Others, like kerutuk which requires dry-roasting in a wok, were tricky. My mum had written down the formula but not the method, timing, and so on. My first batch turned out black and bitter like arang (coal)!”

Without a mentor to guide him, Wan Mohd made a string of rookie mistakes. One of them was a RM30,000 investment in a packaging machine that was later found to be unsuitable for their operations. He also hired sales staff who turned out to be deadwood and bought two cars, which were underutilised, to support the business. All in all, he lost about RM100,000 of his hard-earned savings in the first year because he was “syiok sendiri (overconfident).”

Swallowing his pride, he made some changes to the business in 2017. Wan Mohd moved out of his initial premises in Pasir Pekan and shifted into a small factory in Pengkalan Chepa. Since stocks were not moving as fast as he’d like, he scaled down production by half and got rid of underperforming full-time staff. These days, he hires workers on an ad-hoc basis – they come in only when production supplies ran low.

Crucially, Wan Mohd made the strategic decision to focus on the urban market segment. From observing market trends and his own data analytics, he noticed growing interest among middle-class urbanites in discovering authentic local taste.

“Over 80% of my sales came from outside Kelantan via the Internet. This group has higher spending power and don’t mind paying more for quality products and a nice presentation, ” he says.

Over the next year, Wan Mohd went on an online marketing blitz to generate a strong presence on social media and e-commerce platforms like Shopee and Lazada. Making the most out of his web-building skills, the tech-savvy Wan Mohd kept making improvements to the Rempah Haji Halim website to create a seamless customer experience.

Against all odds, he finally reversed his revenue trend from loss-making to break-even in 2018. Making a mark

With his business at last on a stable financial footing, Wan Mohd worked to penetrate the lucrative food tourism sector. His goal: to put his home state on the culinary map.

Wan Mohd explains, “During my engineer days, I travelled abroad regularly and saw that countries like Japan sell a lot of high-end food souvenirs at airports. I thought to myself, imagine the potential revenue if Kelantan had a product like the Tokyo banana.”

Kelantan has a rich culinary heritage but no food brand that can be readily associated with it, he says.

“I’m talking about brands that instantly recall their place of origin, such as Ipoh’s Old Town White Coffee, Pahang’s Sambal Hitam, and the likes. If you ask anyone to name an iconic Kelantanese food brand, he would have a hard time thinking of a single one.”

This is where he believes Rempah Haji Halim can fill the gap.

“We have a strong product and a strong story, key ingredients for a great brand. Our products have sentimental value and a long history. We have kept the same taste since day one, the real Kelantanese taste, ” he adds.

For a new line of products to be displayed at the airport, Rempah Haji Halim will be packaged into elegant gift packs with a distinct heritage brand identity.

“See these patterns on the side of the label?” he says, holding a prototype. “They represent the Kelantanese craft of woodcarving. We chose these sleek, modern silver-lidded jars to convey a premium feel.”

There’s more. Wan Mohd is in the midst of constructing his own mill to grind spices. At the moment, sourcing, packing and labelling are done in-house, while milling is outsourced to a subcontractor.

Located at a 6,000sq ft site in Pasir Pekan, the completed building will include a gallery where visitors can cook and grind their own spices, and learn the story of Rempah Haji Halim’s evolution told through a collection of old photos and memorabilia.

Rempah Haji Halim is not just about making money, he says, but a way to put his hometown on the map.

“Sandwiched between hot spots like Tumpat and Kota Bharu, my hometown has always been overlooked, but things are changing. People love to stop and take photos of the recently-opened Masjid Al-Ismaili. Makam Tok Janggut is just nearby. Fast food franchises have opened up recently. I keep telling my friends, we must take advantage of this growing interest in our hometown and build something to capture tourists. There is so much more to Kelantan beyond Pasar Siti Khadijah.”

Ultimately, Wan Mohd hopes that Rempah Haji Halim will be like Ramly Burger and Adabi, which not only became big brands but have successfully bridged the generation gap.

“A lot of Malay businesses are dying because they have no business continuity plan. I do not want that to happen to Rempah Haji Halim. I need to make this business work because it is my mum’s legacy, ” he says. 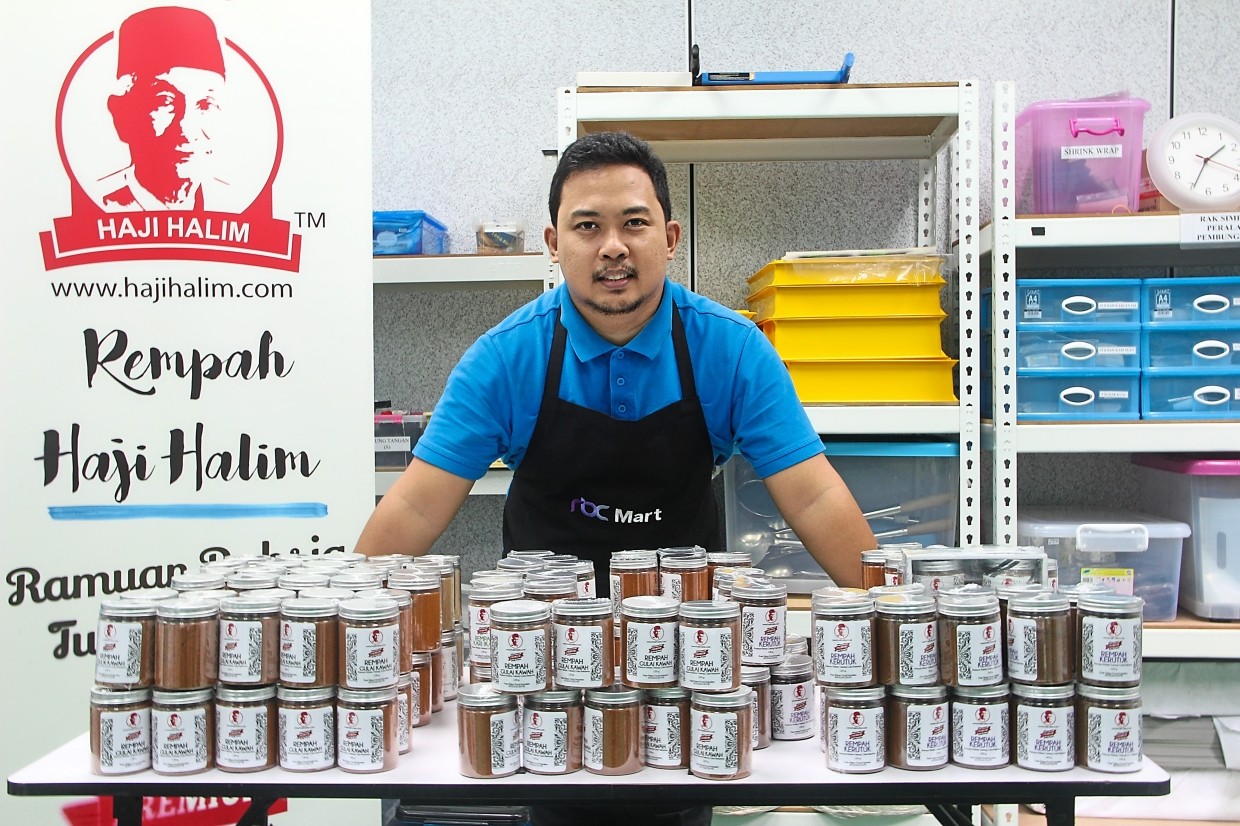 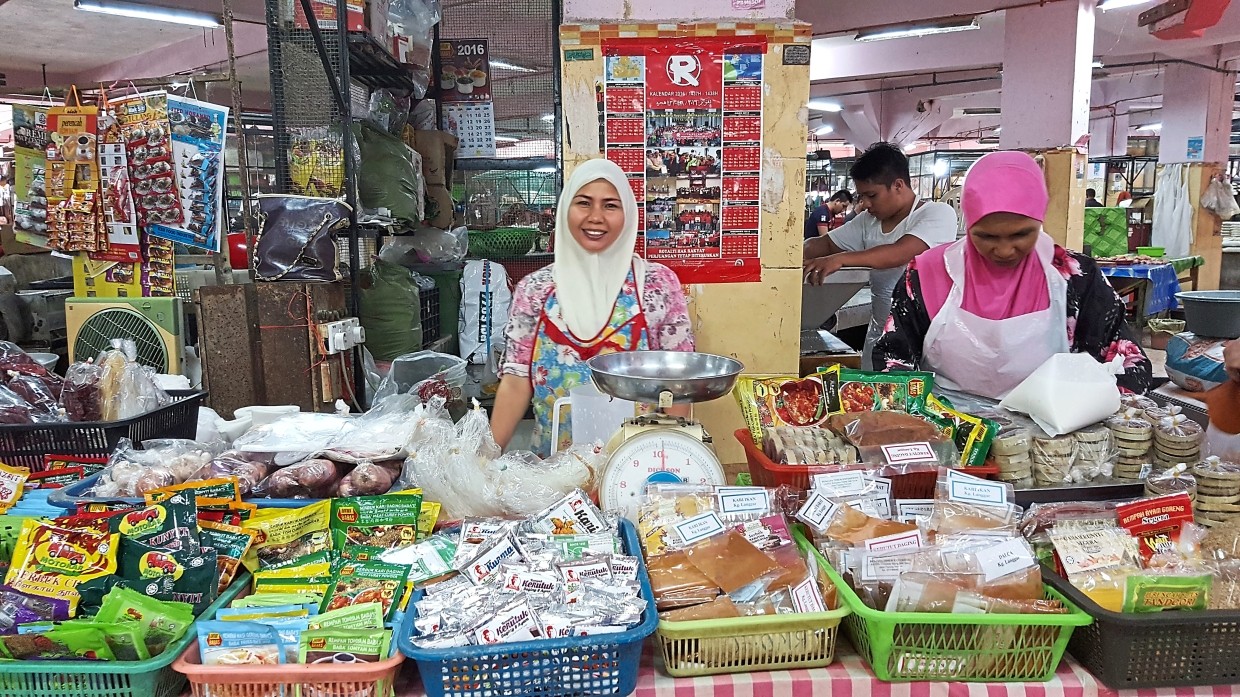 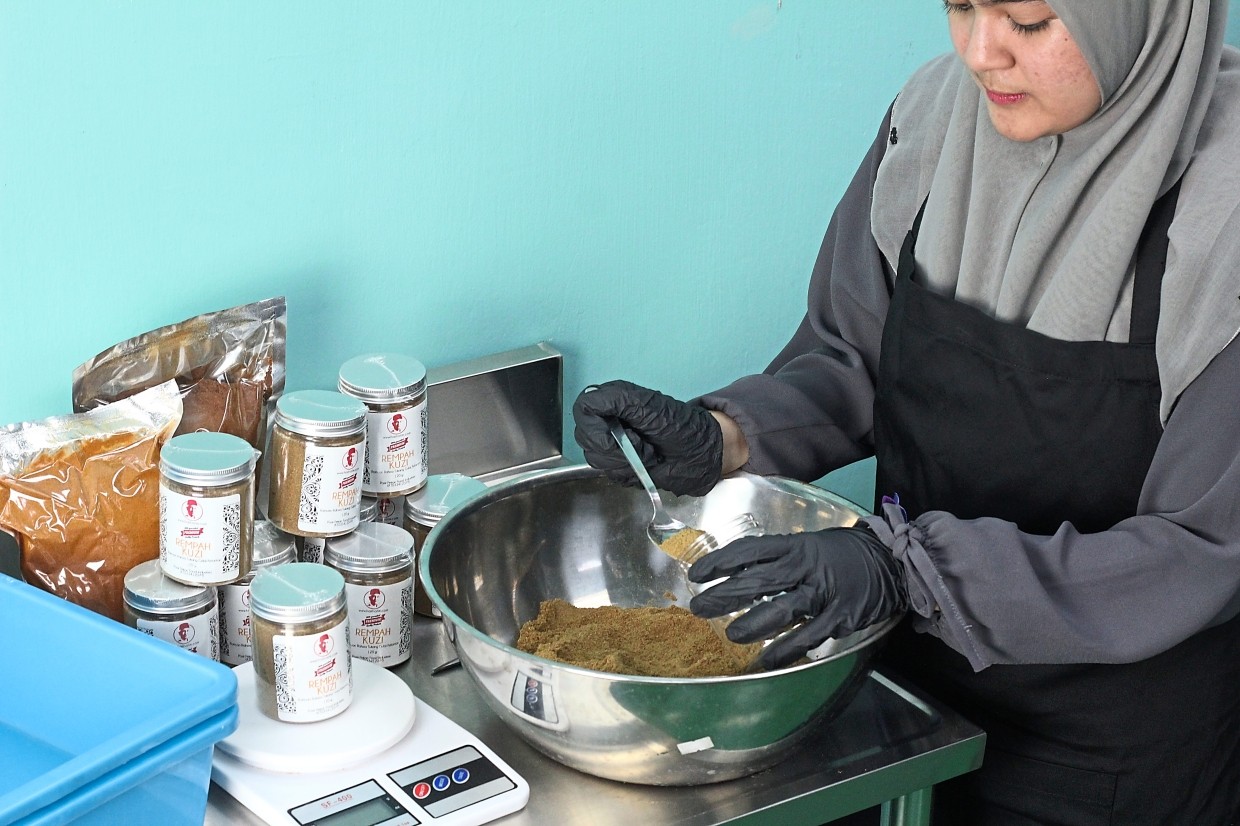 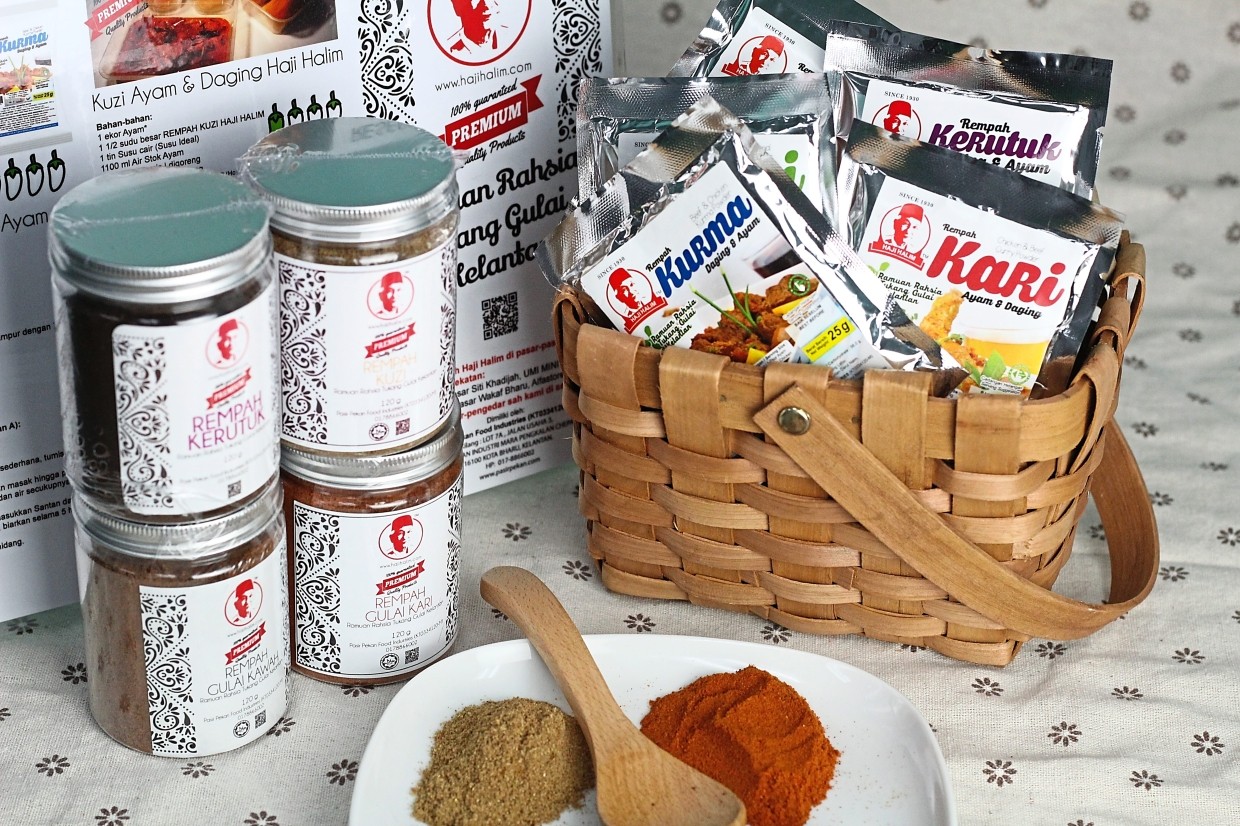 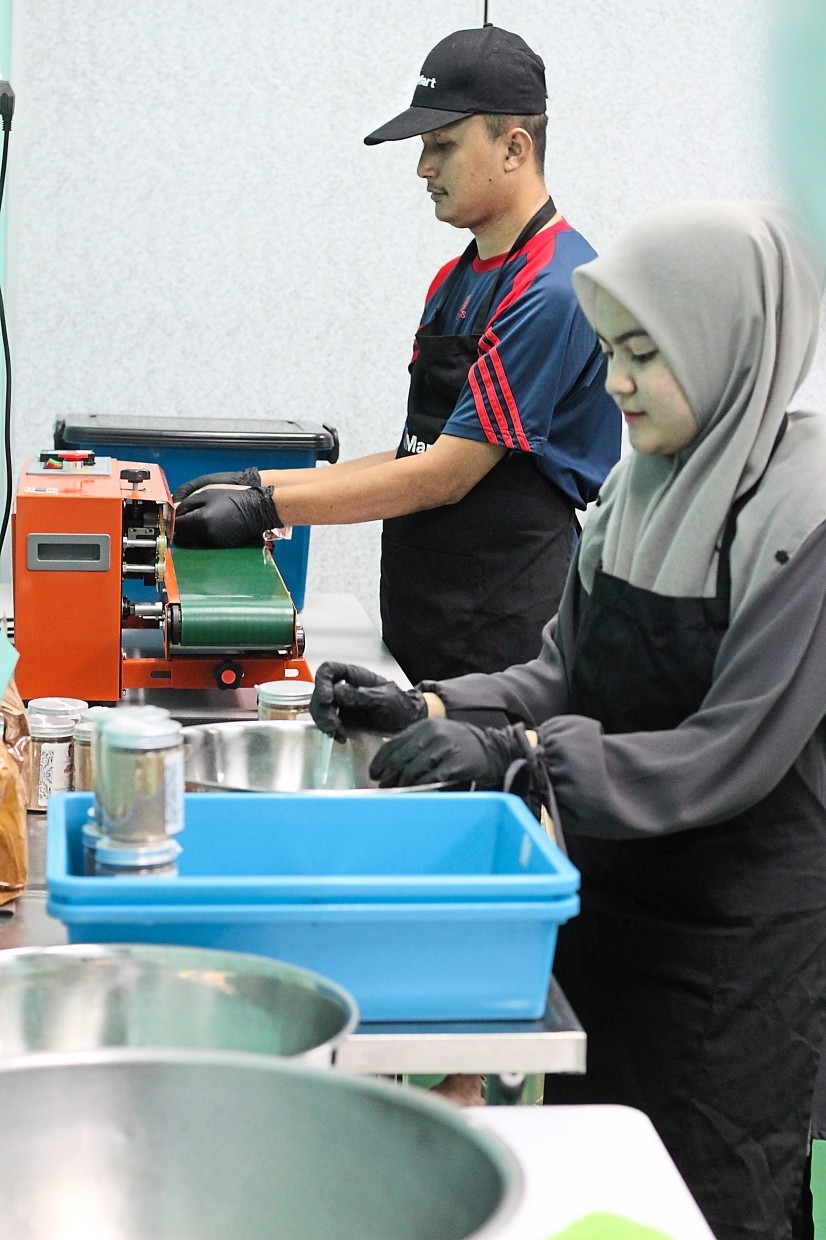 Lesson learned: Wan Mohd made some expensive mistakes in his early days before he refocused and found his footing.

Physical presence: Apart from online, its spices are also sold at markets and sundry shops.

Right blend: Good quality spices are weighed, mixed and grounded before they are packed into jars, sachets and bags.

Cut down: The company scaled down production and right-sized its staff to match smaller demand.