An enabler: Thiagaraja says he can do more for the industry as an entrepreneur.

R.A. Thiagaraja can’t decide if he is really an entrepreneur or a teacher.

“I think I am both,” he says after a short pause.

As he shares at length his journey of becoming an entrepreneur, his story is punctuated with more of his thoughts on teaching and training.

His philosophy is always about “teaching people to fish” and he has built K-pintar Sdn Bhd around this philosophy. It is about enhancing people’s capabilities, he says.

Thiagaraja, the youngest of four, lost his parents at a young age. The four of them were then brought up by their aunt.

“So it always felt more like we were a family of eight children,” he says with a smile.

One thing the Johorian discovered early in life was that education was key to success.

Of course, it wasn’t always about getting the best grades. He tried his hand at sports first. And while the rest of his family excelled in sports, he found it wasn’t his thing. 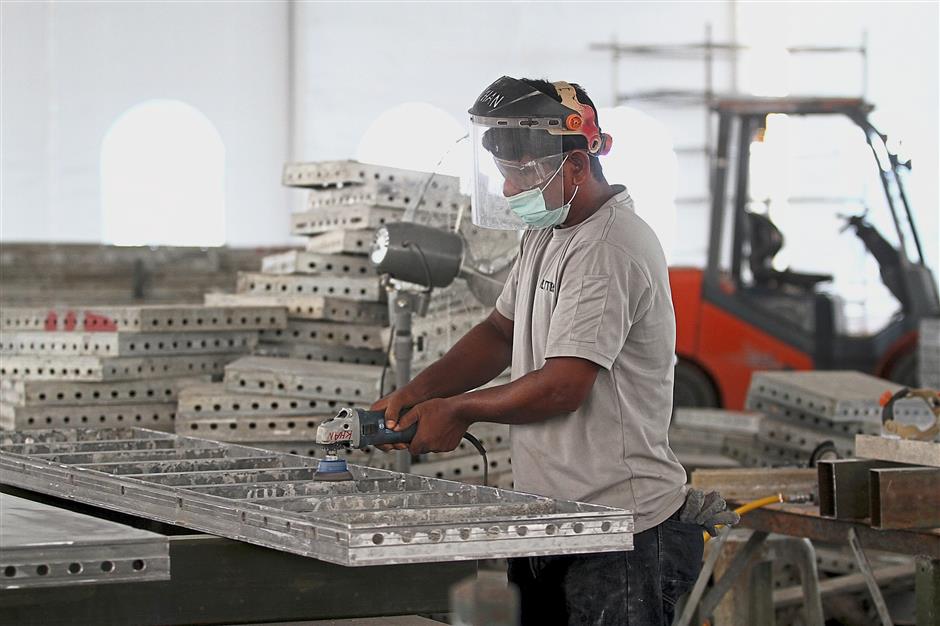 Upgrading know-how: The skillset cycle is getting shorter which requires workers to constantly acquire new skills.

“I tried very hard. I practised hard. But somehow, I just couldn’t make it,” he laughs.

“So I asked myself what were my strengths if it wasn’t sports. And I discovered that I was good at academics. So I put in a lot of effort in my studies and I did well,” he says.

But Thiagaraja insists he wasn’t a nerd.

When he pursued his degree in economics in university, he started volunteering at a non-profit organisation to teach underprivileged communities.

It turned out to be an enriching experience for him.

“You get a lot of satisfaction and purpose. And we got a lot of positive feedback from the kids,” he shares.

He continued volunteering when he could while working in sales and marketing at a French pharmaceutical company over the next eight years until he decided that he wanted to do something close to his heart.

“Earlier, I was a doer. But now, I want to be an enabler. I realised I could give more when I am an entrepreneur,” he says. And so, he founded K-Pintar in 2003 to provide training for corporate employees.

A company’s personnel, he explains, consists of the boss and the workforce. In order to grow a company, increasing productivity – and therefore, enhancing the workforce – was key.

Employees must remain relevant in a changing landscape, he emphasises. And this can be done through training and human resource development.

But now that he was running a company, things were different.

The corporate training field is a competitive one. There were plenty of players offering more or less the same kinds of programmes and being new in the market had all of the disadvantages.

There are 3,650 training providers that are registered with the Human Resources Development Fund alone, notes Thiagaraja. Additionally, private colleges also provided trainings and event companies were increasingly encroaching into the training and coaching event space.

K-Pintar, on the other hand, was an unknown brand, it was low on finances and getting the right talent was difficult. Thiagaraja recalls having to refinance his house and take out loans to keep the company going.

But giving up wasn’t one of Thiagaraja’s traits. Just as he had tried to figure out his strengths as a child, this time, he started pondering on K-Pintar’s strengths that would differentiate it from the competition.

“We didn’t have a differentiation factor. We were like any other human resource training provider out there. So it became about who you know (to get the business) rather than what you have. We didn’t have a solid product,” he acknowledges.

In 2008, he embarked on a research journey to find out what it is that the industry needs. He poured over surveys, research papers, reports and white papers and kept his eye on developments in the international market.

“There was an IMF report that noted that only 28% of the workforce are skilled workers. And we realised this was something we needed to look into. We need to prepare our customers with skills,” he says.

Instead of continuing with training and coaching programmes, which typically focus on aspects such as motivation, teambuilding and behavioural and technical competency, K-Pintar started focusing on equipping customers with skills that will enable career mobility and providing certification and qualification programmes that were globally recognised.

Thiagaraja was excited about its new focus as this new direction supported what he was passionate about – lifelong learning.

The company may have thought it was a trend-setter, but setting the trend was a challenge. It wasn’t easy securing the partnerships needed to provide these programmes. Additionally, it required hefty investments in software, facility, meeting assessment standards and to train their own employees to carry out the programmes.

It felt like they were starting the business all over again, says Thiagaraja.

He adds that they invested a few million ringgits over the next few years to strengthen their value proposition.

“We needed to comply with standards and we needed to train our people. It wasn’t easy because we are investing in intangibles. But in the process, we also learned best practices in the industry to ensure we are giving our customers quality,” he says.

Among its main challenges back then was the industry’s lack of focus on certification.

Employers, notes Thiagaraja, were cautious about sending their staff for certification programmes as they were concerned that their employees would either demand for a higher salary or would leave the company after obtaining their qualifications.

“The market wasn’t ready. So we suffered for a while,” he says.

Their investments started paying off about four years ago when the government started pushing for employers to upskill and reskill their workers to adapt to the changing needs of the business landscape and to remain relevant as technology develops.

“The skillset cycle is getting shorter which requires us to constantly acquire new skills. Otherwise, you become irrelevant. Everything is constantly changing. With Industry Revolution 4.0, the displacement is faster.

“Employers need to train their employees to do the job and to elevate them,” says Thiagaraja.

With its years of building on its offerings, he says K-Pintar is, today, in a unique position to help the local industry with human capital development.

It has tied-up with some 18 partners to offer certification programmes in various fields including management leadership.

Its most recent endeavour is the launch of the Postgraduate Diploma in Digital Leadership Management last month in partnership with Germany’s European School of Management & Technology (ESMT). 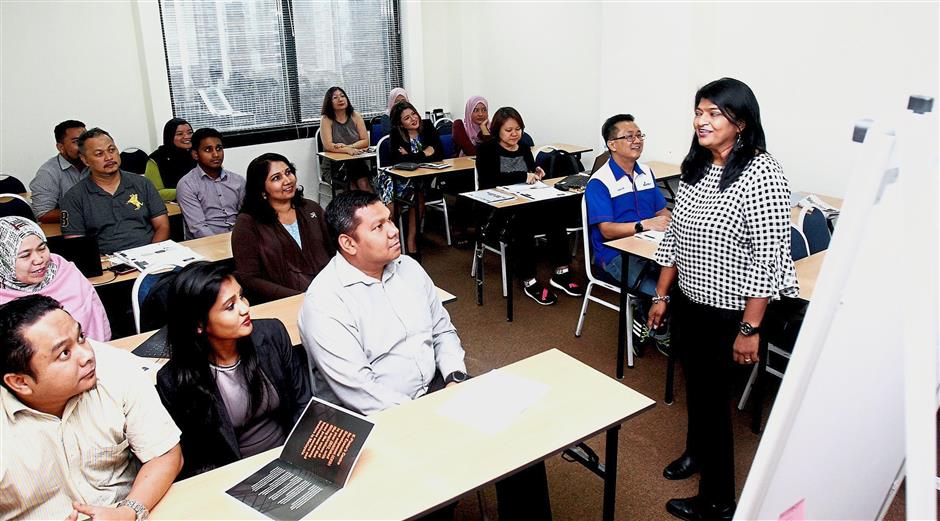 A boon: The company benefited from the government’s push for employers to upskill and reskill their workers four years ago.

Thiagaraja says its programmes have a strong focus on experiential learning so that participants can apply what they have learned. They need to be able to measure tangible outcomes, he emphasises.

Consequently, K-Pintar has seen revenue growth strengthened over the past few years.

Currently, average annual revenue comes in at about RM20mil.

Early this year, Thiagaraja also consolidated subsidiary companies into the group to create a stronger entity with wider offerings and bigger sales.

He has his eyes set on listing the group by 2020. By then, he hopes the group will be turning in sales of RM70mil to RM80mil.

“There is potential for strong growth. We haven’t maximised our potential yet.

“We have laid a lot of foundation and I believe we can achieve this. Now is harvest time,” he says.

He also hopes to grow its international market in the coming years, either by bringing more foreign talents to get trained here or by sending its experts to other markets.

But with the Internet, it is easier to expand overseas. This also gives Malaysia an opportunity to be a digital training hub in the region, he adds.

One of its main challenges remain the availability of good talent. It currently has 37 people and there are plans to grow its headcount.

Thiagaraja won Male Entrepreneur of the Year Award at The Star Outstanding Business Awards (SOBA) 2017 in the up to RM25mil revenue category.

He advises other entrepreneurs to follow their passion and capabilities. Success is only a matter of time.

“I think when you are an entrepreneur, you are somehow the chosen one. And as a chosen one, you have a purpose. And you owe it to yourself and everyone to fulfill that purpose,” he says.