KUALA LUMPUR: There will be no merger of AirAsia’s aviation arm businesses into one new entity, instead all aviation operations will be injected under one existing structure, said Capital A Bhd

He said this implied that four airlines under Capital A, namely AirAsia Malaysia, AirAsia Thailand, AirAsia Philippines, and AirAsia Indonesia, as well as AirAsia X Bhd

"We are just injecting AirAsia airlines into AAX’s listing status... there is no merger. AAX will be renamed AAG and there will be six airlines under it.

"As one company, we can take out a lot of costs but there will be separate operations by each individual airline,” he told the media after launching the AirAsia SUPER Plus (SUPER+) subscription package here today.

He noted that once all the airlines were under one entity, each one will maintain its respective operation of short-haul and medium-haul flight services with the company’s total of 225 aircraft, comprising the Airbus A320 and A321 models.

"Going forward, (we see) major planes will be the A321 for both airlines. We want to grow again, now we have an orderbook of 326 A321 aircraft,” he added.

Meanwhile, during the launch of SUPER+ subscription, Fernandes said the airline is hopeful to open all its networks by the second quarter of next year, pending the reopening of a few other destinations currently still under the COVID-19 restriction measures.

"We could not control when (China) will open, but we are hoping it opens sometime next year. The only (networks) that are not opening now are Macau and China, the rest are all open,” he said.

The SUPER+ subscription is made available for purchase worldwide with unlimited free seats to over 130 destinations, including unlimited discounts for hotels and airasia ride. - Bernama 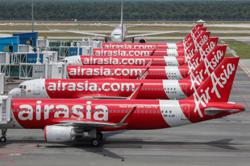