The KNM board said it will consider other methods of monetising its investment in Borsig, either through the sale of the company to other potential purchasers or revive a potential listing of Borsig on any other primary stock exchanges.

’s proposed sale of its entire stake in Borsig GmbH for €220.8mil (RM1.03bil) to Vorsprung Industries GmbH, formerly GPR Siebzigste Verwaltungsgesellschaft mbH, has collapsed leaving the debt-laden group to consider other options including a possible listing of the unit instead.

KNM, in a filing with Bursa Malaysia yesterday, stated the last extension sale date of Nov 30, 2022 for Borsig, a process equipment manufacturer based in Germany, passed without the closing of the transaction mainly due to financing issues.

“The board wishes to announce that after several discussions and negotiations with the purchaser, the board is not convinced that the closing conditions, in particular regarding the financing of the proposed disposal, will be satisfied swiftly,” the PN17 status KNM said in its filing.

It added the KNM board decided not to further extend the longstop date of the proposed disposal and instead has exercised its withdrawal right under the share sale and purchase agreement.

The KNM board will now consider other methods of monetising its investment in Borsig, either through the sale of the company to other potential purchasers or revive a potential listing exercise of Borsig on any other primary stock exchange.

The Borsig sale would have seen KNM make an estimated loss of RM490.55mil on the sale. KNM bought Borsig for RM1.65bil in 2008.

However, if the cashflow of RM1bil received from the German company over the years are taken into computation, the sale would still be profitable for KNM.

Borsig is the group’s main operating asset in Europe. It contributed a revenue of RM163.43mil or 74.6% of the RM219.22mil revenue KNM made from its Europe segment in the first quarter ended Sept 30, 2022, its exchange filing showed.

Borsig’s contribution accounted for 66.2% of the RM246.84mil in revenue the group made for the period.

According to KNM’s recent exchange filing, the Europe segment contributed a gross profit of RM44.74mil to the group and achieved an operating profit of RM18.5mil despite with an unrealised foreign exchange loss incurred for the financial period under review.

Without Borsig, the Europe segment would have posted a lower gross profit of RM4.48mil and an operating loss of RM16.95mil mainly due to low order books recorded in Italy and the United Arab Emirates.

The failed Borsig sale also threw a spanner into any regularisation plan of KNM, which slipped into the PN17 status in early November after its current liabilities exceeded its current assets, leading its auditor to highlight a material uncertainty over KNM’s ability to continue as a going concern.

The company had some RM1.075bil in short term loans and borrowings on its books as of Sept 30, its filing showed.

KNM had intended to use some RM874mil from the proposed Borsig sale proceeds to pare down debt.

In a separate filing yesterday, KNM noted the company is in the process of formulating a plan to regularise its financial condition and it has 11 months to submit its regularisation plan to the relevant authorities for approval.

KNM had, in November 2021, also missed principal and coupon payments on bonds issued in Thailand worth 2.78 billion baht (RM356.8mil) mainly due to inability to complete the Borsig sale on time.

The bonds are guaranteed by Credit Guarantee and Investment Facility (CGIF), a trust fund managed by the Asian Development Bank, which then had to pay the bondholders.

KNM had planned to refund CGIF with the proceeds from the sale of Borsig.

“The company will make the necessary announcement to Bursa Malaysia Securities as and when there is material development in relation thereof,” KNM said in a filing yesterday following the cancellation of the Borsig sale.

KNM shares closed unchanged at 5.5 sen on the news yesterday, giving it a market capitalisation of RM202mil. 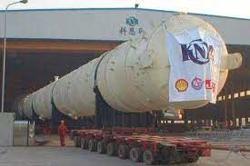