NEW YORK: The number of carbon capture and storage (CCS) projects in development is at record levels this year on the back of rising carbon prices and government incentives, but they still only mitigate less than 1% of annual emissions, a new report finds.

There are now 153 CCS projects in the planning phase, 61 more than this time last year and more than at any time in history, the Melbourne-based Global CCS Institute found in its annual survey of the sector. They would add to the 30 projects currently operating and a further 11 under construction.

The United States leads the way with 34 new proposed CCS projects, followed by Canada, the United Kingdom, Norway, Australia, the Netherlands and Iceland.

CCS technology, which captures CO2 from a range of sources and stores it underground, usually in depleted oil or gas reservoirs, has proved a controversial technology.

Supporters say it has a vital role in the push to keep global warming within the Paris Agreement’s stated target of 1.5 degrees Celsius, with around 1.3 billion tonnes of storage capacity needed by 2030 to meet that target, according to the IEA.

But critics argue that CCS is an expensive, ineffective technology that serves only to prolong the life of fossil fuels.

Early examples focused on capturing emissions from coal-fired power plants, while on the storage side, CO2 was often injected into petroleum reservoirs to extract oil, a technique known as “enhanced oil recovery”.

Both applications supported continued fossil fuel use, which is still the main area for CCS projects.

Natural gas processing is the most common application in existing CCS projects, while ethanol production, power generation, manufacture of hydrogen with natural gas (known as “blue hydrogen”) are the most common for those in development.

But attention has increasingly widened to technology such as “direct air carbon capture and storage”, which removes CO2 directly out of the atmosphere and stores it, and captures the emissions from hard to abate industries like cement and steel.

These applications were advocated by international authorities and were found to be growing.

“CCS is the Swiss Army knife of climate mitigation. It will continue to play multiple, unique roles in decarbonising the global economy,” said Jarad Daniels, chief executive officer of the Global CCS Institute.

“Many industries, like cement and chemical production, have no other viable path for deep decarbonisation other than CCS.”

The report did not say how much the planned projects would cost, but the Global CCS Institute last year estimated between US$655bil (RM3.1 trillion) and US$1.28 trillion (RM6 trillion) of investment in carbon-capture technologies could reduce emissions by 15% by 2050, which it argued was “well within the capacity of the private sector.” — Bloomberg 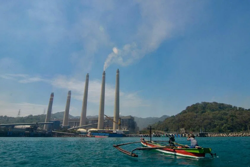