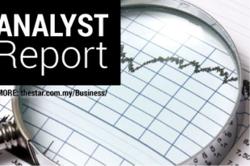 has been served with a winding-up petition over a rental dispute involving a retail lot at the Pacific Express Hotel.

has proposed to undertake a scheme of arrangement, including a minimum RM55 million fundraising exercise, to settle the group's RM138.47 million debt.

Meanwhile, Apex said the FBM KLCI could continue to hover below the resistance of 1,427 points following the decline on Wall Street.

The US market tumbled overnight ahead of the September jobs report which would influence the Federal Reserve's policy tightening.