WITH the ringgit passing the RM4.50 mark to the mighty US dollar, questions have been asked as to where the ringgit is headed, as it has dropped almost 9% year-to-date and at a level last seen during the Asian Financial Crisis in 1998 – almost a quarter of a century ago.

“See you at five” – a term coined during the crisis time, is being re-played like a broken record as speculation mounts that the ringgit will hit the unthinkable five handle to the dollar in future.

However, as we are aware, the ringgit is not to be entirely blamed for its weakness, as there are other factors that are playing out.

If one were to analyse carefully, the ringgit is in actual fact firmer against the Japanese yen by about 12.5%, up 7.2% and 7.1% against the British pound and the South Korean won respectively; between 0.9% and 3.8% higher against the Chinese yuan, Thai baht, Philippine peso and the euro. 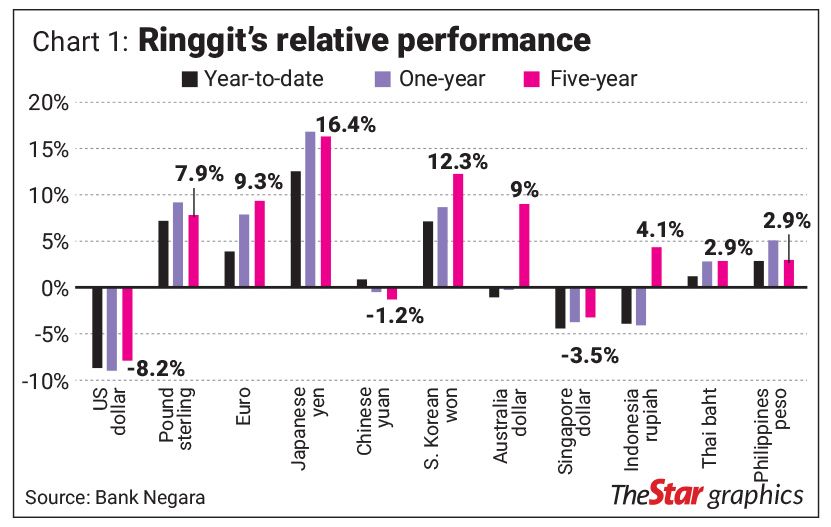 Other than the US dollar, the ringgit is only weaker against the Australian dollar, Indonesian rupiah, and the regional champion, the Singapore dollar by between 1.1% and 4.5%.

Hence, overall, for the performance year-to-date, the ringgit may look like a weak currency as we are fixated on comparing the ringgit’s performance against the US dollar as well as the Singapore dollar, but in actual fact, the ringgit has outperformed at least seven other major and regional currencies.

The strength of the US dollar cannot be denied as the Federal Reserve (Fed) is battling hard against high inflation prints and is left with no choice but to raise the benchmark Fed fund rate (FFR).

Having raised 225 basis points or bps so far this year, the Fed is now poised to increase the FFR by another 75 bps in the September Federal Open Market Committee (FOMC) meeting next week, with odds of 100 bps too not being ruled out at all.

This was after the headline and core US inflation prints came in at 8.3% and 6.3%, and ahead of the market forecast of 8.1% and 6% respectively. Should the FOMC raise the FFR by 75 bps next week, the market is pricing in another 75-bps hike in the November meeting and a 50-bps increase in the December meeting.

Indeed, the divergence in the monetary policy adopted by the Fed has a significant impact on the ringgit too. 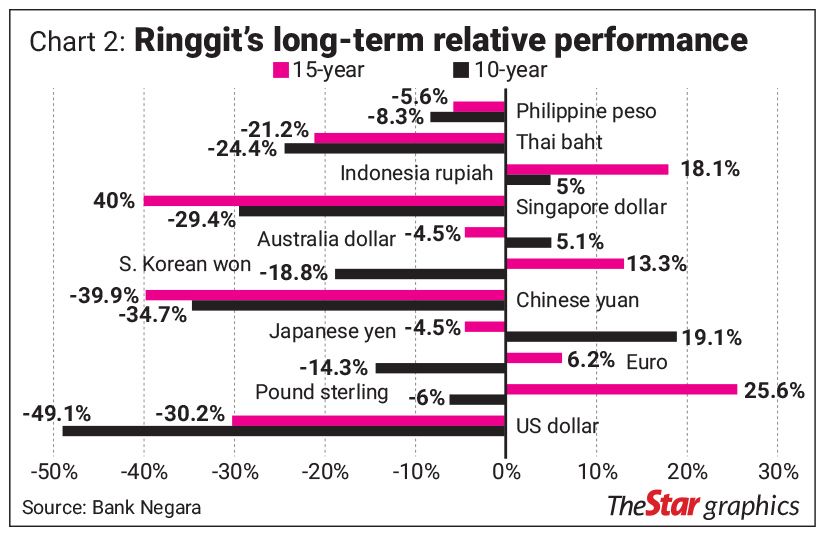 The CNY has also been weaker against the USD as the Chinese economy has not been doing well since China’s zero tolerance towards Covid-19 cases, which has resulted in major cities or regions going into short-term lockdowns, hitting even a fresh two-year low, flirting with the 7 handle against the USD.

Other factors too are playing out on the Ringgit weakness, although we are fortunate that we continue to run a current account surplus, we have been running budget deficits for nearly a quarter of a century. This has ballooned our federal government debt level to the extent that we have even moved the needle to ensure we remain within the redefined debt/GDP ratio.

Malaysia also has an over-dependence on foreign workers, which continues to weaken the Ringgit with a high level of foreign remittances as well as a deficit in our services account and net outflows from primary income. In addition, Malaysians investing abroad is another strain on the Ringgit while errors and omissions too can be a large contributor to the Ringgit’s weakness as well.

A relatively stable currency over the last five years

As measuring a currency is all relative, it is understandable when the general public refers to the Ringgit’s strength or weakness as “only” when compared with the USD and to a certain extent, the SGD.

While the picture looks respectable over the past five years, data going back over a 10-year and 15-year period, suggests that the Ringgit has significantly underperformed. Chart 2 shows the performance of the Ringgit vis-à-vis the major global and regional currencies.

Another comparison is the performance of the Ringgit since it was de-pegged on July 21, 2005.

As currencies are valued on a relative basis by comparing one currency with another, an alternative approach is to look into the Real Effective Exchange Rate (REER) which takes into account the weighted average of a currency in relation to an index or a basket of other major currencies.

The weights are based on comparing the relative trade balance of a currency against each country in the index. REER data is provided by the Bank of International Settlement (BIS) monthly and chart 3 summarizes Malaysia’s REER performance since the de-pegging days, plotted against the USD.

The chart shows a highly correlated chart whereby the correlation was observed at -0.95, suggesting that REER has a significant impact on the value of the USDMYR exchange rate. 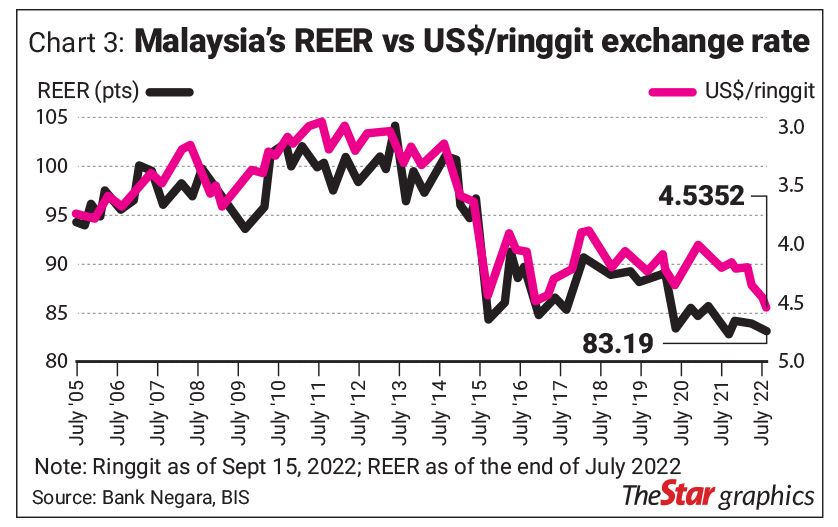 A tough question as the valuation of a currency is always seen as a relative point to another currency while the strength/weakness of one currency can also be attributed to the relative weakness/strength of another currency. Nevertheless, if one were to gauge the REER as a reference point, the Ringgit is effectively undervalued by approximately 16.8%, as a neutral REER should be at the 100.00 index point level. At this level, the Ringgit’s fair value is approximately RM3.89 to the USD. However, the REER has always been trading below the 100.00 index point level, except for a brief occasion between April 2010 and August 2011; in Feb/March 2012; and between November 2012 and May 2013. In July 2011, the Ringgit traded at its post-de-pegging high of RM2.9385 before succumbing to weakness due to multiple reasons. BNM’s international reserves begin to weaken from a peak of US$141.4bil (or RM435.5bil) as at May 2013 at a time when the Ringgit was trading at RM3.08 to the Dollar and the REER was at its peak of 104.11 pts.

However, if one were to take the average REER of 93.34 pts over the past 17 years, the Ringgit has a fair value of RM4.17 to the Dollar. Hence, while the Ringgit has weakened considerably against major currencies, especially since its de-pegging days, the local currency remains an undervalued currency by between 8.9% and 16.6%. While the Ringgit is seen as weak against the USD and SGD, it has outperformed against other major currencies like the EUR, GBP, and JPY.

Over the longer term, Malaysia needs to address the serious structural issues that have made us less competitive than our neighbours. Top of the list is education reforms which should be addressed quickly as we are losing out our young bright minds via migration. One of Malaysia’s biggest losses is the brain drain that has benefitted many countries, especially Singapore, Australia, and even as far as the US. The second issue that Malaysia needs to address is to attract right-minded high-skilled knowledge workers as well as the ability to attract the right investment dollars into Malaysia. The spill-over effect from an investment-friendly country is multiple as it can help to lift Malaysia’s competitiveness not only in traditional fields but new robust industries related to the technology and services industry.

Third, Malaysia needs to address the current low wage levels of Malaysians as we cannot be a high-income nation if 50% of Malaysians are earning less than RM2,100 per month.

There must be a concerted effort to increase wages, which will indirectly address not only the rising cost of living but increase the affordability as well as tax revenues of the government.

Fourth is our fight against corruption. It is a known fact that a low ranking in Transparency International’s Corruption Perception Index is highly correlated to the cost of doing business. Malaysia needs to make greater efforts to weed out the corrupt practices, both in the government and in the private sector to enable Malaysia to be better position to not only attract the right global investors but to reduce the cost of public spending, which eventually leads to a lower cost to consumers. Finally, it’s the politics and public policies that come with it.

We must not only be investor friendly but must avoid flip-flopping policies that can cause serious irreparable damage to our reputation in the eyes of the world.

Public policies too must be cleverly crafted with the right inputs from all stakeholders to enable Malaysia to march forward as one.

Only then, we will see a stronger Ringgit not only against the currencies that Malaysia has outperformed but also against the mighty USD and SGD.