Supply chain snarls at the company's newer facilities in Texas and Germany also hurt production, with analysts warning that these issues may crimp Tesla's profits.

Tesla Inc TSLA.O faces a series of hurdles ranging from production snags to rising inflation that may hit profits, Wall Street analysts said on Tuesday, as the electric-car maker reported a fall in deliveries for the first time in two years.

Stung by China's COVID-19 lockdowns and soaring costs, Tesla said on Saturday it delivered 254,695 vehicles in the second quarter, down about 18% from the first quarter.

Supply chain snarls at the company's newer facilities in Texas and Germany also hurt production, with analysts warning that these issues may crimp Tesla's profits.

The world's largest electric-car maker's shares fell more than 3% but reversed course to close up 2.6%, benefiting from a rally in growth stocks.

So far this year, the stock has lost about a third of its value.

"Tesla's luster has dimmed yet again with this latest drop in deliveries coming in lower than expectations," Hargreaves Lansdown analyst Susannah Streeter said, adding that this was a setback to the carmaker's ambitions to stay at the front of the EV pack.

"Tesla is faced with a whack-a-mole scenario, the faster one problem is fixed, another pops up."

J.P Morgan analysts, who cut their PT on the company's shares by $10 to $385, said Tesla's production and financial results could be hurt by company-specific execution issues at the carmaker's new factories in Texas and Berlin.

Streeter cautioned that the cost-of-living squeeze around the world due to red-hot inflation could have a knock-on effect on demand down the line.

Some analysts, however, expect a recovery toward the end of the year.

The Austin and Berlin plants are likely to remain a drag on results until they attain higher utilization rates, but expect volumes to rebound strongly in the second half of the year, Garrett Nelson, senior equity analyst at CFRA Research, said.- Reuters 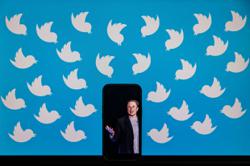