FILE PHOTO: General view of a McDonald's sign in Stokeon-Trent

A pandemic-driven menu overhaul at McDonald’s Corp has eliminated more nutritious menu options such as grilled-chicken sandwiches and fruit and yogurt parfaits.

The world’s biggest restaurant company is trimming out offerings to move diners through lines and drive-thrus faster and with less staff – a key necessity as restaurants struggle to attract and retain workers.

While mounting commodity and wage expenses have weighed on restaurants’ margins in recent quarters, faster service and higher sales can help to offset that.

McDonald’s says it has shaved about 30 seconds off of its drive-thru wait times over the past few years, in part thanks to the menu cuts.

This has a noticeable impact for investors: Restaurant margin, a key measure that takes into account operating costs, is expected to improve to 16.2% in the second quarter, up from 14% in the prior period, according to estimates compiled by Bloomberg.

“With the shortage of labour, you’re trying to keep your menus as streamlined and as simple as possible,” Saleh said. “For many of these restaurants, their menus get bloated with some of these new items, and then you cut it off to help with speed.”

Restaurant operators are happy with the new strategy, which cut some healthy items due to longer prep time and lower demand.

“Our simplified menu enables for speed,” said the National Owners Association, a large group of McDonald’s franchisees, in an email last month viewed by Bloomberg News.

An efficient car lane is key to sales growth, according to the group: “We love fast drive thrus, happy customers, and happy crews.” Franchisees operate about 95% of McDonald’s US locations.

McDonald’s shares have fallen about 9% so far in 2022, less than the decline of the S&P 500 Index. The stock has 27 “buy” ratings from Wall Street analysts, with 11 “holds” and only one “sell” recommendation.

The losers, of course, are health-conscious consumers whose options are now limited.

Salads, which McDonald’s first introduced decades ago and only made up a very small percentage of sales, are still available in certain local markets, but they’re no longer listed on the McDonald’s website.

There are no plans to bring them back nationally right now. Also gone: The 250-calorie Egg White Delight McMuffin, rolled out with much fanfare in 2013 amid a push for nutrition with Olympic gold medalist Gabby Douglas. In comparison, a regular Egg McMuffin has 310 calories.

McDonald’s still offers apple slices and oatmeal with fruit. But it’s clear the fast-food chain, which has faced criticism for not offering more nutritional options, is focusing on core items including burgers, fried-chicken sandwiches and desserts such as a new McFlurry that’s made with chocolate-covered pretzels.

The company’s “Favourites Under 400 Calories” menu, started in 2012, is no more. Offerings such as kale salads and wraps with cucumbers and tomatoes have come and gone over the years.

The Chicago-based company says its menu is fuelled by customers’ appetites.

“Our transition to a limited menu, involving taking dozens of less popular national and regional items off menus, helped simplify operations for our restaurant crew while also improving our customers’ experience,” McDonald’s said in an emailed statement.

“We continue to evaluate our menu through this lens to improve order accuracy and speed.”

Since Covid-19 upended daily life, restaurant menus have been cut more than 10% on average, according to industry researcher Datassential.

Nearly 60% of restaurants last year axed items, especially in the appetiser, dessert and beverage categories, up from the 37% that made cuts the previous year. Burger King, for example, has also gotten rid of salads, removing them from the chain’s national menu in December.

Meanwhile, consumers are tiring of cooking at home, which has helped restaurant sales. But companies will have to work to keep diners’ attention.

McDonald’s’ healthy options, while never a big driver of revenue, helped the company to stand out, according to Tom Cook, principal at restaurant consultant King-Casey.

“You always need to have something, some news to drive traffic, particularly these days,” said Cook, who worked with McDonald’s in the mid-2000s to help introduce a handful of new salads, including one with apples.

He said the leafy-green entrees were a big deal at the time – even though management knew they’d never rival burgers sales. The goal with salads was to draw in female diners and especially mothers with children, he said.

“Here’s a case of knowing that it’s never going to be popular and sell a lot, but we’re going to make a big story out of it to communicate that we’re healthy,” he said.

“It was a very high priority.” Fast forward to today, and “they’re just probably saying, ‘we don’t really need those,’” Cook said.

To be sure, the menu cuts have also included indulgent items such as the McChicken biscuit and a bacon, egg and cheese bagel that had more than 500 calories and half-a-day’s worth of salt.

But McDonald’s seems to have gone farther than some peers in cutting low-calorie options. For example, Wendy’s Co and Chick-fil-A Inc still have salads and grilled chicken on their national line-ups.

The story changes to some extent for McDonald’s overseas. Australia offers oat milk, and salads are still on the menu in countries such as Italy and the Netherlands. UK locations offer cucumber sticks.

But the disappearance of healthy items at most of the chain’s 13,000 US locations is “a huge step backwards,” said Lindsay Moyer, senior nutritionist at food and health watchdog Centre for Science in the Public Interest.

“You have to wonder if McDonald’s has almost given up trying to pretend they have something to offer people who want healthier items,” she said. — Bloomberg 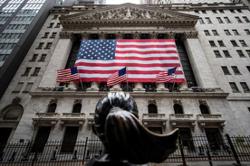