Indonesia President Joko Widodo announced last Friday that exports of cooking oil and crude palm oil (CPO) would be suspended from April 28 in a bid to stabilise prices in the country.

A shortage of cooking oil in the world’s largest palm oil producing country has led to soaring prices in recent months, triggering protests.

On the local front, analysts believe that the export ban will give investors a short-term trading opportunity for plantation companies with high exposure to Malaysian operations.

CGS-CIMB Research in a report yesterday said potential winners from the export ban are palm oil producers with estates in Malaysia.

, as well as producers of competing edible oils (soy, sunflower and rapeseed oil).

“The other likely winners from this decision are cooking oil consumers in Indonesia.”

CGS-CIMB said the decision to ban palm oil exports could result in a sharp fall in cooking oil price in Indonesia, assuming that it results in a local cooking oil supply glut.

“It is unclear if downstream palm products like oleochemicals and biodiesel are affected by the export ban.

“Assuming they are not affected by the temporary export ban, we see this development as potentially positive for them in the short term.”

The research house added that CPO prices in Malaysia is expected to rise significantly and potentially surge to new record highs, due to panic buying by consumers if the temporary ban lasts more than four weeks.

TA Securities also concurred that Malaysian exporters will likely benefit in the short term and are clear winners from the export ban, as buyers would now be more likely to buy more Malaysian palm oil.

“All companies under our coverage have exposure in Indonesia but earnings are mostly derived from Malaysian operation.

is the only company that has the most exposure to Indonesia (85% of total planted area).”

However, TA Securities noted that TSH Resources sells most of its CPO to local refineries in Indonesia.

“Thus, it may have narrower margins for the operations in Indonesia. Meanwhile, KLK’s exposure in Indonesia has also increased post the acquisition of IJM Plantations Bhd

“As IJM Plantations also sells its CPO locally, the impact may be similar to TSH Resources. In a nutshell, we are unable to ascertain more earnings impact due to lack of details.”

UOB Kay Hian, meanwhile, said there might be a short-term trading opportunity for companies with higher exposure in Malaysia, riding on the short-term pent-up demand for local palm oil, which would buoy the country’s CPO prices further.

“Under our coverage, they would be companies like Hap Seng Plantations, Sarawak Oil Palms Bhd

RHB Investment Bank said vegetable oil prices would spike as a result of the export ban.

“But should Indonesia change its stance, this will also reverse quickly. We continue to stay neutral on the sector, advocating a trading strategy.”

The research house has a “buy” call on potential beneficiaries of the export ban, which include pure planters Sarawak Oil Palms, Ta Ann Holdings and downstream planters in Indonesia, namely KLK.

“This would prolong the upcycle in vegetable oil prices. Ukraine and Russia are entering the critical month for sunflower planting, which should start in April, and the prolonged war could hamper the coming planting season.

Separately, TA Securities said environmental, social and governance (ESG)-related investments among plantation companies could be affected as the top concern now is on the fears of shortages of edible oils and fresh spike in cooking oil prices, which will increase global food costs.

“ESG investing can end up taking a backseat as performance could be profit-orientated when other asset classes are volatile.

“As palm oil is a remarkably efficient crop and the most produced vegetable oil in the world, it is likely the solution to the shortage of other edible oils in the world.” 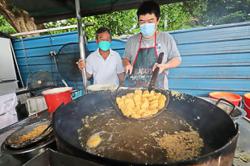