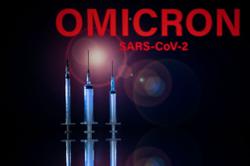 The gauge of South-East Asian stocks slumped almost 7% in the two months after the Delta variant was officially named at the end of May.

SINGAPORE: Emerging-market traders are taking the once-bitten, twice-shy approach with South-East Asia and Omicron, dumping shares from the region that was most impacted when the Delta variant arrived.

The MSCI AC Asean Index has fallen more than 4% since US Thanksgiving – when Omicron first made its presence known in markets – underperforming the 2% decline in Latin American shares and a tiny gain in Eastern European equities.

The gauge of South-East Asian stocks slumped almost 7% in the two months after the Delta variant was officially named at the end of May.

Making matters worse for investors, the region is also threatened by concern over slowing growth in China and the prospect that the Federal Reserve will raise interest rates sooner than earlier anticipated.

Traders are looking out for data on China’s exports and inflation this week, alongside more information on the spread and potency of the new variant.

“Omicron could further push back the timeline on any travel-related and reopening rebound, and this continued ‘stop-start’ approach to reopening could result in weaker near-term growth,” said Alexander Wolf, head of Asia investment strategy at JPMorgan Private Bank in Hong Kong. “From a stock perspective, we’ll likely see some near-term volatility given the amount of unknowns and the unclear impact on growth and policy.”

The appearance of Omicron has refreshed memories of the northern summer when the combination of the Delta variant surge and low vaccination rates made South-East Asia the world’s worst virus hotspot. That led to postponed reopenings and reinstated mobility restrictions as deaths in the region soared.

While progress has been made, many South-East Asian nations are still lagging behind in vaccinations, according to data complied by Bloomberg. — Bloomberg