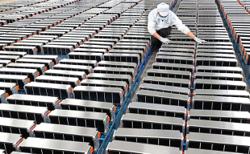 Saviours: A worker produces carpets that will be exported, at a factory in Binzhou, in the eastern Shandong province. China’s manufacturers helped keep the global supply chains up and running against all odds during the pandemic. -- AFP

BEIJING: As the world’s economy looks forward to staging a full recovery after being savaged for nearly two years by the impact of Covid-19, perhaps a whole chapter in history will likely be devoted to the valiant, relentless but little recognised role played by China’s manufacturers in ensuring such a recovery was possible in the first place, experts said.

China’s manufacturers helped keep the global supply chains up and running against all odds during the difficult period, thereby averting what could have been a certain collapse of trade systems and processes due to the severe disruptions, they said.

The story of the never-say-die spirit and panache shown by China’s manufacturers since the outbreak of the novel coronavirus, they said, is the kind of stuff that legends are made of.

For one, China’s manufacturers bore the heavy pressure of growing labour and shipping costs. For another, they had to cope with temporary power shortages in certain provinces. They also had to battle foreign exchange rate fluctuations.

That’s not all. The surge in imported material prices made production of goods – stay-at-home products, electronic components, toilet rolls, toys, vaccines, medical gear, what have you – a difficult business proposition.

Yet, China’s manufacturers soldiered on gamely, to serve not only their nation but the rest of the world under the grip of the pandemic.

For instance, they raised their investments in research and development. Some redrew their sourcing and marketing strategies.

Others focused on reskilling and rewarding their human resources. A few even managed to cut costs and adjust product prices to boost sales and exports. All this helped not only China but the rest of the world.

During the National Day holiday from Oct 1 to 7, Starlite Printers, in an unprecedented move, tripled wages to meet the orders received against stiff deadlines.

It was able to do so thanks to its nimble response to the recent price drop in the shipping containers segment.

The freight rate of a 40-foot container from Asia to western ports of the United States fell from over US$20,000 (RM83,000) per shipping box in early September to around US$17,300 (RM71,794) late last month. The drop was propelled by seasonal factors and price adjustment of freight forwarders and shipping companies, said Xu Guoying, vice-president of Starlite Printers.

“Forced by high shipping costs, many export-oriented companies in China either reduced or suspended the export activities in the second and third quarters of this year,” Xu said.

She also said Starlite Printers had been rushing to ship its products to its foreign clients between late September and early October, not only in the United States but in Europe.

Like Starlite Printers, Chinese manufacturers, especially small and medium-sized enterprises, have been striving to safeguard their competitiveness and remain profitable amid the dire circumstances.

Many of them upgraded the technology content of their products substantially, embraced new formats for foreign trade like cross-border e-commerce, and raised the prices of their products carefully, to avoid getting badgered by the impact of the appreciation in China’s yuan and the commodity price surge.

“The challenge of ensuring the supply chains functioned unhindered has existed for domestic manufacturers even before 2020, but the epidemic made the situation more acute and cumbersome,” said Li Xingqian, director-general of the foreign trade department at the Ministry of Commerce.

He noted that many Chinese companies turned to the domestic market and local innovation for securing adequate number of key parts to overcome the heavy dependence on foreign supplies.

For instance, Shenzhen Xidesheng Bicycle Co Ltd, a company specialising in the manufacture of high-end products like mountain bikes, road bikes, sports bikes and electric bikes for global markets, has finalised its production plan till the end of 2022, to meet the demand for various bikes, which has been mounting since last year.

This change in sourcing strategy helped it to ease pressures created by the price rises in imported key parts and components, and mitigated potential risks caused by an overstrained global supply chain, said Li Xiangrong, board secretary of the Guangdong province-based bike maker.

In response to supply chain troubles, Xidesheng, like many other domestic companies, built its own R&D strengths and achieved gradual domestic substitution for imports in recent years.

For instance, imports of parts like smart motors from Europe for e-bikes were extremely expensive as each motor can be worth several thousand yuan, which affected the company’s ability to post strong profits.

So, the company decided to invest 12% of its annual sales revenue each year on R&D, in order to produce its own centrally mounted torque motors supported by advanced sensors.

“The market feedback to our own smart motors was encouraging,” said Li. “With our own brands and patents, we no longer worry about being restrained by foreign suppliers in certain key industrial parts, and the prices of a range of our high-end bicycles also dropped between 30% and 40% over the past several years.” — China Daily/ANNAgreed Chen Jiayuan, vice-president of Guangzhou Light Industry and Trade Group Ltd, a state-owned manufacturer of garment and food products with more than 10,000 workers in Guangdong province. Chen said the group rode China’s dual-circulation development paradigm to grow its foreign trade volume by 7% year-on-year in the first three quarters of this year.

In the dual-circulation model, the domestic market is the mainstay while the domestic and foreign markets reinforce each other.

“To better adapt to the changes in the global market, we have increased our R&D of popular products like kitchen and home furnishings, healthy food, lighting and sport products as the epidemic has changed many people’s lifestyles and purchasing preferences,” Chen said.

In order to reduce the high costs arising from expensive ocean shipping and other uncertainties, the company will make developing the domestic market one of its key tasks, centering on the group’s industrial and supply chains, and will actively look for resources to reinforce its comprehensive competitiveness in the coming years.

Based on its business performance during the first nine months, the group’s foreign trade value is expected to reach US$1.5bil (RM6.2bil) this year, Chen said.

Export-oriented companies receive US dollars from their foreign clients, but pay for materials and wages in yuan. So, many Chinese exporters raised their product prices earlier this year after negotiating with their overseas clients to hedge against currency fluctuations as well as change the timelines of order quotation from one year to six months, or even three months now. – China Daily/ANN