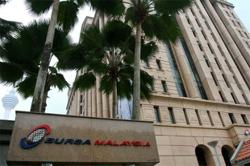 Keeping tabs: The Securities Commission building in Kuala Lumpur. It has taken steps to reprimand the relevant parties for the wrongdoing involving CAP.

Holdings Ltd (CAP), its current and former directors, and chief financial officers for various breaches of the securities laws.

According to the SC, pursuant to the company’s initial public offering (IPO), CAP had submitted to the SC and issued a prospectus dated Jan 11, 2013, that contained financial statements of its wholly-owned subsidiary that were false or misleading, due to overstatement of the subsidiary’s bank balances.

CAP was listed on the Main Market of Bursa Malaysia on Jan 30, 2013, at an IPO price of RM0.68 and with the listing of 600 million shares, giving it a market capitalisation of RM408mil. Its IPO was also oversubscribed by almost 2.4 times.

On its first day of listing, CAP saw its share price surging by 88% to RM1.28 but ended its first listing day at 78 sen, just 10 sen above its offer price. One week before its listing on Bursa, CAP provided its fourth quarter (Q4) 2012 financial statements to Bursa which showed it had approximately RM110mil in net cash and total shareholders’ funds of RM209.3mil.

Before CAP’s accounts were made subject to greater scrutiny, the company announced quarter after quarter of respectable quarterly statements, and by Q3 of 2015, announced in mid-November 2015, the company declared that it had net cash of RM319.3mil and total shareholders’ funds of RM566.7mil. At that time the share price was trading at just three sen per share, although it had a net asset of 35 sen per share and net cash per share of 16.8 sen. It was in this quarterly statement that CAP declared that it was taking a RM55.9mil hit in the form of impairment of its trade receivables.

Subsequently, on April 25, 2017, CAP announced that it was unable to release its annual report together with its annual financial statement for the year ended Dec 31, 2016, by April 28, 2017, due to additional works to be performed by their external auditors of the company and CAP also informed the exchange that it intends to issue the annual report not later than two months from April 28, 2017. However, the next day, it announced to the exchange that it was changing its financial year from Dec 31, 2016, to June 30, 2017.

In all fairness, Bursa did query CAP on its move to delay the release of its audited accounts and change in year-end, and in response, the company informed the exchange that its auditors needed to verify the company’s sales details, identify product quality issues as well as to verify the loss caused by regional agents and/or compensations made.

CAP also said that the auditors needed to verify the trademarks infringement litigation involving the company as well as other legal events with the relevant lawyers.

A week later, CAP updated the bourse with fresh information with regards to certain tax and litigation matters as well as bank balances, which required further probe by the auditors.

On May 26, 2017, CAP’s auditors, PKF, issued a notice to the directors of the company and the regulators that their audited report dated April 6, 2016, for CAP’s financial statements for the financial year ended Dec 31, 2015, could no longer be relied upon, and on Jan 18, 2018, the auditors issued a disclaimer of opinion for the same financial year-ended report.

By then, the company’s financials were effectively wiped out as it showed zero revenue, a RM676.3mil loss, total assets comprising just RM17,000 in the form of cash, negative equity of RM642,000, and net liability per share of 0.05 sen.

Nothing much has changed since Q1 of 2017 as the latest quarterly results ended Q2 of 2021 showed the company only having some RM20,000 in the form of cash, negative equity of RM2.05mil, and net liability per share of 0.1 sen.

What went wrong at CAP?

To a large extent, judging by the price gap between the share price and the net asset value of the company, it can be said that the market was suspicious of the company’s financials, despite the company’s disclosure of its “healthy balance sheet”.

Based on the announcement made to Bursa, there were no material changes to the shareholding in the company except for three block transactions involving:

No prices were disclosed for the above transactions, but on the date the transactions took place, the shares were then trading at about 30 sen, 12 sen, and 6-7 sen respectively. Based on the information provided by CAP in its prospectus dated January 11, 2013, GIHL is the promoter and substantial shareholder of the company.

While major shareholders are entitled to sell their respective holdings at any time they wish, but the sale of shares by them to the extent they cease to be majority shareholders do ring an alarm bell especially at a time when the financial statements show a positive trend but this is not reflected in the share price. More so, if the sale of the shares is done by none other than the promoters of the company at the IPO itself.

Time to bring the culprits to book

To recap, the prospectus of the company was issued January 11, 2013, which then provided financial statements for the period ended Sept 30, 2012, for the IPO. The SC’s statement, which implies that the company’s financial statements were false and misleading from 2013 to 2018 captures the time when CAP did issue audited annual reports, which is between 2013 and 2015.

Hence, it is not too far-fetch to assume that the IPO itself was flawed with the financial statements that were presented then. If this is true, should the authorities not take the relevant parties involved in preparing the prospectus to be accountable?

The relevant parties would include the auditors and the reporting accountants, legal advisers, principal advisers, and last but not least the promoter and substantial shareholder of the company, GIHL.

Is the reprimand now issued by the SC sufficient for the wrongdoings as millions were lost in the market value of the company and the cash and assets held by the company before Q1 of 2017 simply evaporated in thin air?

In conclusion, while the SC has taken steps to reprimand the relevant parties for the wrongdoing, there seems to be more than meets the eye in terms of how these financial statements were presented to investors, especially at the IPO itself.

Surely, there must be greater accountability for false and misleading financial statements of companies listed on the stock market and those involved must be subject to greater punishment under the Capital Market and Services Act, 2007, and not just mere reprimand.

It is perhaps also not out of place to suggest that reprimands by the SC, whenever required, be done in a timely manner and not after years the acts took place. This will allow members of the investing public to be more alert and informed of their investment decisions.