Emerging markets ready to face risk of US policy tightening 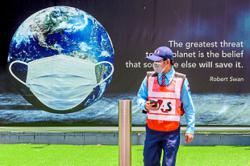 BlackRock Investment Institute, for instance, advises investors to stay invested in emerging markets even though there could be bouts of market volatility amid expectations of the Fed unwinding its quantitative easing (QE), or bond-buying, programme and raising interest rates.

AS expectations of US Federal Reserve (Fed) tightening its monetary policy gather pace, so are concerns among investors over a potential repeat of the 2013 taper tantrum that rocked emerging markets (EMs).

Some fund managers, however, reckon investors should not be too worried about it.

They note while EMs will be tested when the Fed begins to talk about dialing back its stimulus, they are confident there won’t be a repeat of the taper tantrum, which about eight years ago saw a huge outflow of capital from EM stock and bond markets, resulting in the sharp depreciation of EM currencies.

BlackRock Investment Institute, for instance, advises investors to stay invested in EMs even though there could be bouts of market volatility amid expectations of the Fed unwinding its quantitative easing (QE), or bond-buying, programme and raising interest rates.

“Any temporary spikes in rates by the Fed could challenge EM assets in particular, but we advocate staying invested looking through any turbulence as the new nominal plays out, ” the fund management company says in a note to its clients.

The Fed is expected to announce in August or September its decision on reducing its massive bond-buying programme due to rising inflation.

According to Schroder Investment Management, the current bout of inflation in the United States will prove to be largely transitory.

However, the strength of the US economic recovery means that we now expect underlying price pressures to build next year such that policymakers will need to act sooner in tightening its monetary policy, the asset manager argues.

It acknowledges that the present development immediately brings back memories of the taper tantrum that disrupted financial markets, particularly in the emerging world, in 2013.

That year saw the Fed surprisingly announced its plan to reduce asset purchases, catching investors off-guard, and resulting in a 100ps increase in the 10-year US Treasury yield.

Fears of higher risk-free rates in the United States sparked capital flight from EMs. Malaysia was among the affected countries.

“There are good reasons to think that an exact repeat of the 2013 taper tantrum will be avoided.

“Policymakers will be keen not to follow in the footsteps of (then Fed chairman) Bernanke in upsetting the applecart, and are likely to be more cautious in approach and communication, ” Schroders says.

“Meanwhile, the idea of tapering is no longer alien to markets. Indeed, investors are already speculating about its timing. And as we argued earlier this year, the macroeconomic backdrop in EM is somewhat different: tepid inflows of ‘hot money’ mean that there is not such a large overhang of positioning by foreign investors, and the Covid-18 crisis has cleaned up the balance of payments in most economies, ” it adds.

It says, at present, only a handful of EMs have large current account deficits that rely on short-term funding, which was the crux of the “fragile five” in 2013.

The Institute of International Finance (IIF) cautions while EM current accounts appear healthy at present, there is a risk of external imbalances re-emerging in the medium term, drawing parallels from the experience after the 2008/2009 global financial crisis.

This could mean EM vulnerability to risk in taper tantrum.

In a recent note, the IIF says EM current account deficits remain small or inexistent at present due to strong global demand and high commodity prices.

“Imports recovered completely from the Covid-19 shock in all countries we monitor but trade deficits remain small or inexistent due to strong exports. The ongoing global recovery and high commodity prices bode well for EM exports. However, we do not think these are signs of a permanent shift toward benign EM current account positions, ” the IIF points out.

The IIF explains that the healthy picture of EM current accounts at present is no guarantee of permanently lower vulnerability.

“This means EM vulnerability in the context of rising global rates, ” the IIF says, following its study on the parallels between now and then, and the implications for EM current accounts in the next two years.

“Back then, EMs came out the crisis with manageable current account deficits and went on to enjoy a period of favourable commodity prices. Healthy external positions did not last long, though.

As the May 2013 taper tantrum approached, several EMs, including commodity exporters, were running dangerously wide current account deficits, leaving them at risk in the taper tantrum, it explains.